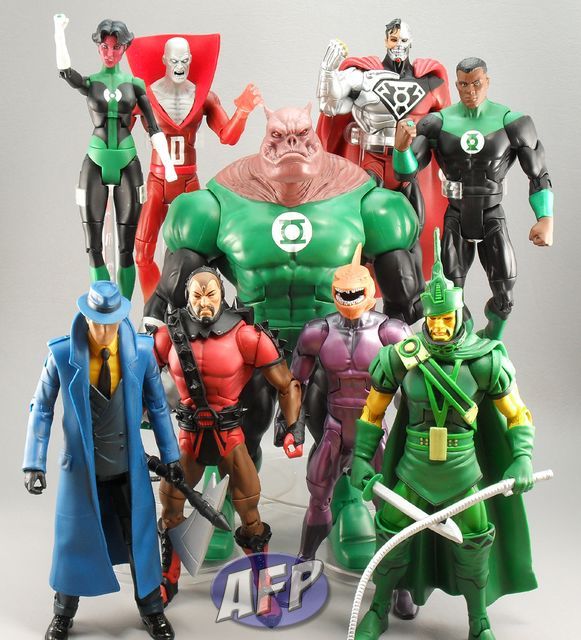 Wham! DC Universe Classics Wave 11 is here and collectors are getting them from e-tailers, retailers and MattyCollector.com. It’s literally raining DCUC 11! And what better way to rejoice than loading up AFP with a boatload of DCUC 11 pics, praises and nit picks!

I knew it was going to be a very Merry Christmas for me as the DCUC 11 set I ordered from Enchanted Toy Chest arrived on Christmas Eve. Unfortunately my wife was home from work already and decreed I couldn’t open the case until Christmas morning…

Before I get to the individual figures, I’ll go over some generalities about the whole set. First off all the figures for this Wave that I received are very well made. The plastic is good and sturdy feeling (compared to the Wave 9 figure’s plastic that had a soft, waxy feel). They all have nice tight joints and are easy to put into poses without fear of them toppling over and clearing out a row of figures on your shelf. The paint apps are pretty good, not as tight as DCUC 10, but nothing horrendous. Unfortunately almost every figure in my set has some kind of scarring on their faces. Wonder if this is widespread throughout the run? Other than that the quality is very good. 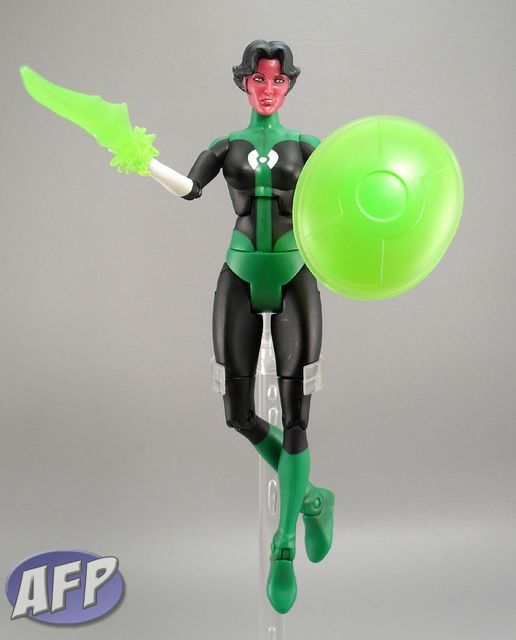 Katma Tui, the second Green Lantern from Korugar, is the first figure of Wave 11. She reuses the Harley Quinn/Karu Sil body. In my opinion, the Black Canary body would’ve been a better choice as it is much more aesthetically pleasing (sexier). The head sculpt for Katma is very well done and pretty but her head seems a little big for this body. The paint apps are very tight and the green of her costume matches up with the green on the DCUC Hal and Abin figures.

The constructs are excellent and necessary accessories for Lanterns of all colors! Both constructs grip Katma’s right fist very well. One improvement for the future would be if the constructs were made to fit over both the right and left hands, especially if you’re going to give a character a sword and shield. Katma’s constructs are specifically molded to use with her right hand but with a little tweaking, the shield can be made to loosely fit her left fist. Despite this nit, the inclusion of the constructs is a very welcome addition to this line. 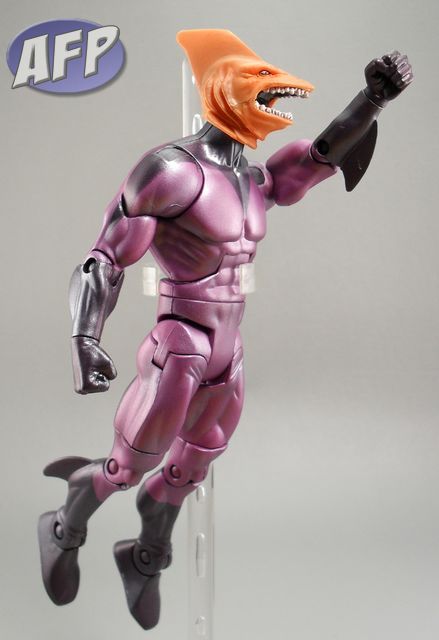 Second in the Wave 11 lineup is the shark headed mutant and longtime GL nemesis, Shark! A reuse of the tried and true slimmer build body (Manta, Flash, GL) with the addition of sculpted fins to his forearms, calves and back. Other costume details are rendered with sharp paint apps in light and dark candied purple.

The real scene stealer with Shark is his head sculpt. It’s very detailed and a dead on reproduction of the Silver and Bronze Age look for this character. I know from reading posts in the forums that some fans are bothered by the way the head looks on the neck while others aren’t. Whether you like it or not, it is comic accurate.

Bottom Line: I was very “meh” about Shark when he was announced in the lineup. But, like B’wana Beast, now that I have him I’ve developed a special fondness for him. Should he ever become  the victim of an accident or desperate trade deal, I would breathe a sad sigh whenever I spied the cold empty space on my shelf where he once stood . 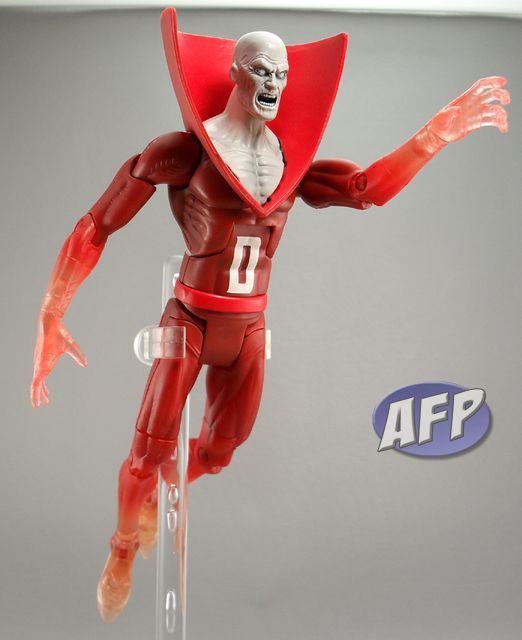 Boston Brand was high on my Most Wanted for DCUC Wish List and I was very excited when I read that he was slated for DCUC 11. Apparently someone at Mattel was also excited about Deadman. Not only is he sporting a brand new body style, he is also the 70/30 variant of the Wave. The variant of Deadman has a phasing (translucent) effect from his hands to forearms and feet to calves and (if that wasn’t enough) glow in the dark eyes, teeth and “D” insignia. You can see from the pics that I was lucky enough to get the variant version in my set from Enchanted Toy Chest.

Being a big fan of the early renditions of Deadman by Neal Adams and Jim Aparo, I was a little let down when I saw that his modern/emaciated look was used for the design of this figure. That all changed when I opened him up and  started posing him for these pics. I had an absolute blast playing with him. He is hand candy and looks so cool when posed with a flight stand! 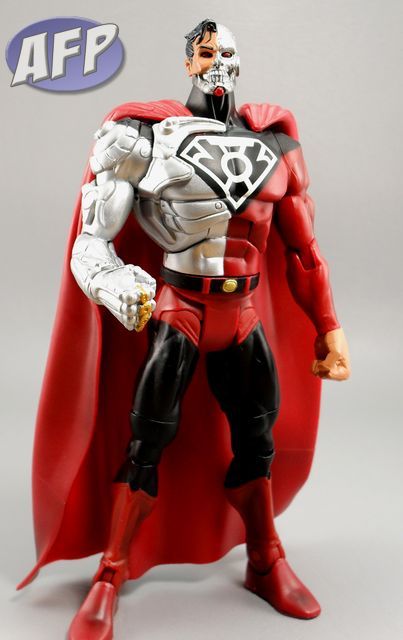 The fourth figure in the Wave is huge fan favorite, Sinestro Corps Cyborg Superman. Apparently I missed the memo because I was surprised to find out that SCCSM actually uses a slightly retooled DCSH Cyborg Superman bod. Now I know what you’re thinking but don’t worry, the wide stance problem that plagued those bodies has been mostly corrected in this figure – just check out the pics!

SCCSM’s sculpted and painted details all look fantastic. His SC insignias on his chest and cape are super sharp. Some fans are disappointed that his left hand is devoid of rings but the five on his right fist sparkle with yellow fear. My own personal little nit is that SCCSM is a little short due to reuse of the DCSH bod, but it’s not a deal killer for me.

Bottom Line: A very bad ass and twisted amalgamation of man and machine!

Enjoy the pics and I’ll get Part 2 up in here soon. If you haven’t gotten them yet, DCUC 11 sets are still available for pre-order and in stock with Big Bad Toy Store, Enchanted Toy Chest and MattyCollector.com. If you love the thrill of the hunt, DCUC 11 is also showing up in Wal-Mart Action Figure aisles across the USA.