I am in love with Art Asylum’s Marvel Minimates. Yes I am. I have always seen these guys in my local comic book shop and at Toys R Us, I always thought they looked interesting, but I never gave in to buying them. When I saw the Series 28 Deadpool, I was so impressed with the detail and the wealth of accessories that I decided to pick him up. Open the floodgates. I was an official Minimates collector. I know I’ll never be a completist with this line starting so late, but I do notice that Art Asylum has been updating some of the previous Marvel characters they have done before. So there’s still a chance to catch up on some characters that I’ve missed!

Today we’ll have a look at Series 32. If you’re a die-hard Minimates fan, you’ve probably picked these guys up already as they came out around January. For the curious, read on and see if Minimates are something you’d be into! 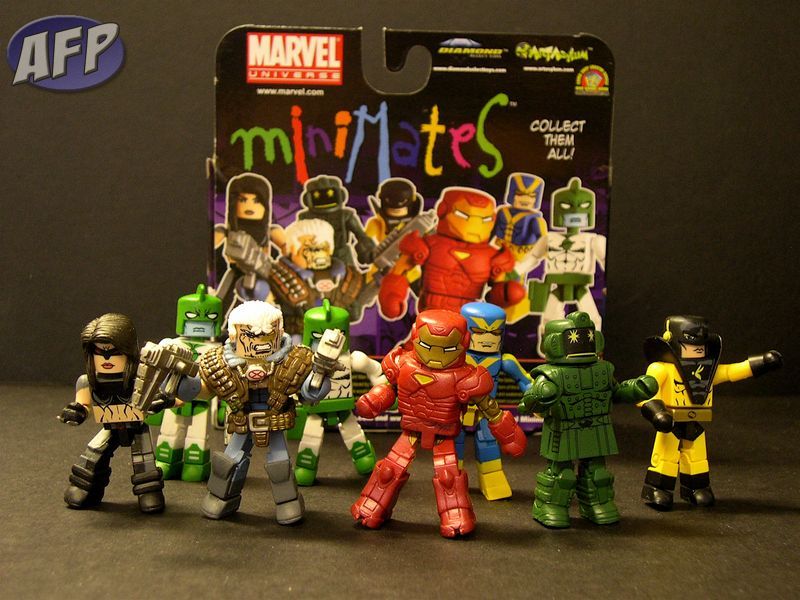 This set includes Iron Man in his Extremis Armor and Titanium Man (Boris Bullski), they both have alternate hairpieces, arms, feet and hands.   ( In the pic I left Boris Bullski’s boots on!)  This is part of why I love minimates.  They give you different display options on most of their characters, in this case, you get to display Tony and Boris with or without their armor (or you can go halfway!).

One thing I noticed though is that Iron Man stands a little bit taller than Titanium man (due to his boots), I do wish Boris had the same tall boots to add some height to him. 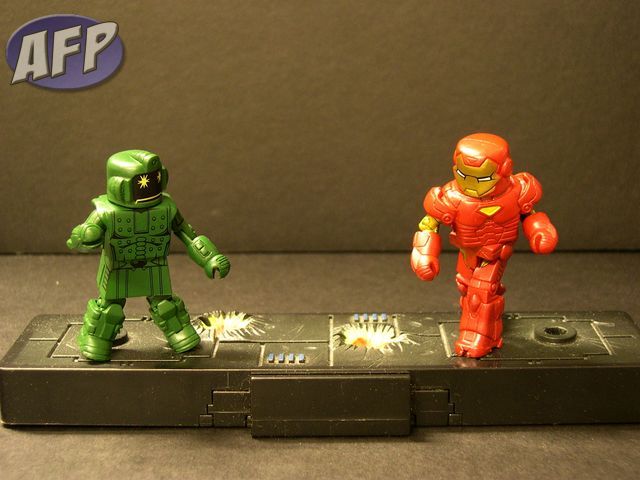 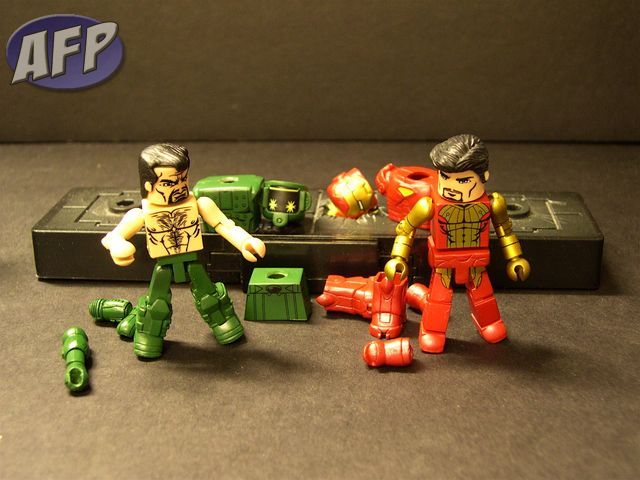 This set has Cable in his classic costume, with 2 guns (big ones), a handgun and a knife (which can all attach to his back!)  There is also a hole on his left shoulder, which I assume was for one of his guns, so I stuck one there in one of the pics.  Also the two big guns have pegs and holes which can be used to put both guns together to form a bigger gun!  I love the amount of detail Art Asylum put into his outfit, look at all those pockets and sleeves, full of who knows what!  He’s probably my favorite from this line!

His knife and handgun are really tiny though and they occassionally fall off  from his back (I had a hell of a time looking for his knife one night!)  Also he can be a little top heavy due to his costume, but for the most part he can stand on his own! 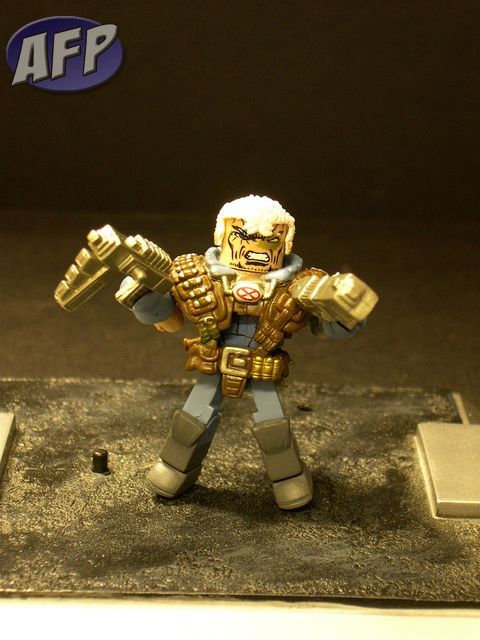 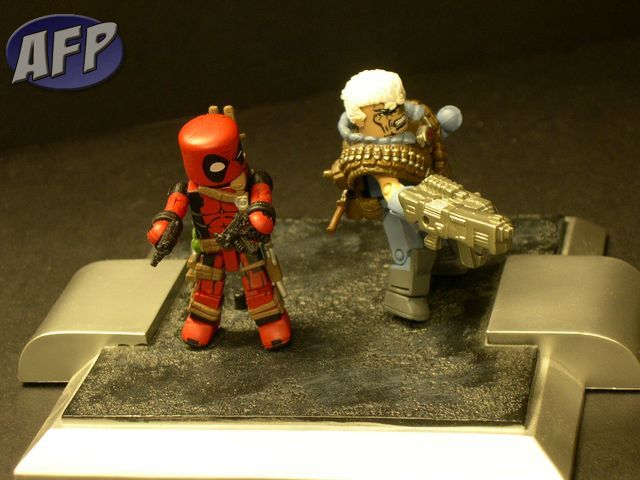 X-23 comes in her X-force outfit, with an alternate head (no mask) and hands (claws sheathed).  There’s a lot of attitude in this Minimate and she matches up well with the X-force Wolverine from Series 29. 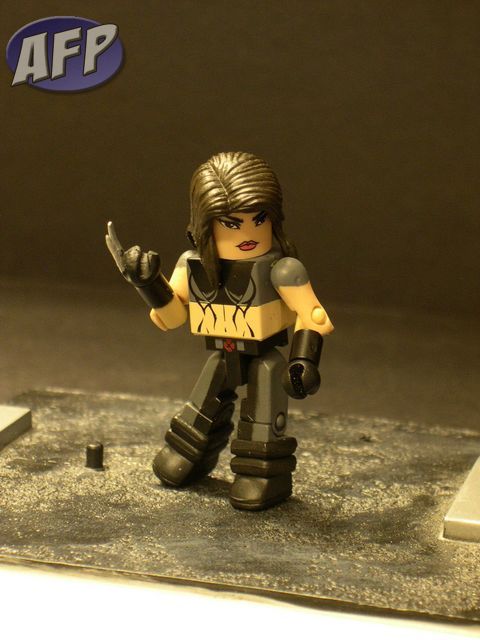 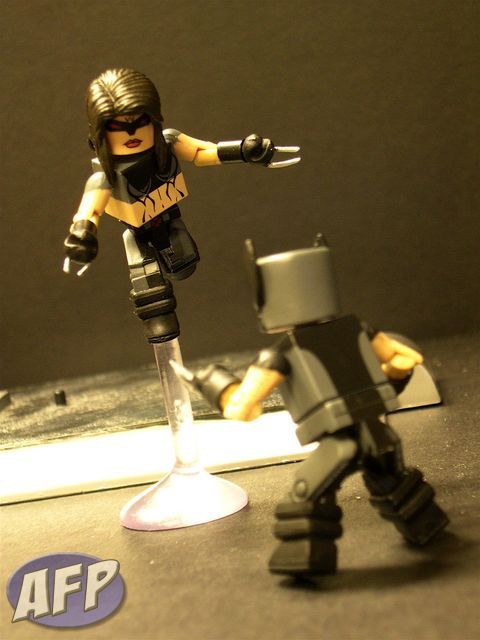 Next we have Yellowjacket and a Kree Soldier together with the Variant set of Goliath and the same Kree soldier!

I’ve always liked the Yellowjacket costume, and they really did a great job capturing his look.  His hairpiece has a slicker comb to it compared to the roughly set hair of Goliath!  I love that Art Asylum didn’t go cheap by giving them the same hairdo.  It really goes a long way for me as a collector, that they try to put in as many extras they can.  The attention to detail is really appreciated. (I included a scale pic with an Marvel Legend Yellowjacket and Marvel Universe Iron Man, just for kicks.) 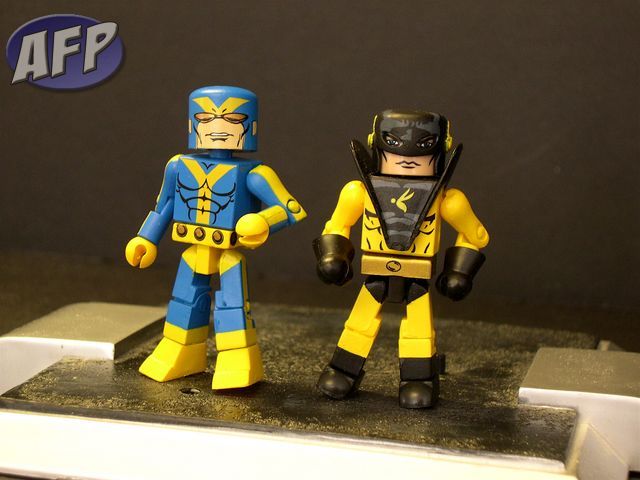 Art Asylum continues the trend of pairing army builders with variant sets in this series. I think it’s a great idea, I’d rather have another version of Hank Pym rather than two Yellowjackets. Of course I think a better idea would be to pair army builders together, so it’ll be easier to build armies without getting multiples of non-army builder characters. The Kree soldiers come with a gun that fits in their holster. Their mask is removable, although they don’t have an alternate hairpiece. You can pluck a flesh colored head out of another character and put it on a Kree soldier and you’ll have Captain Marvel in his Kree uniform! I love the white and green color combination, they really pop in a display (I think the same of Goliath’s color combo).  Now they can battle the Skrulls from Series 28! 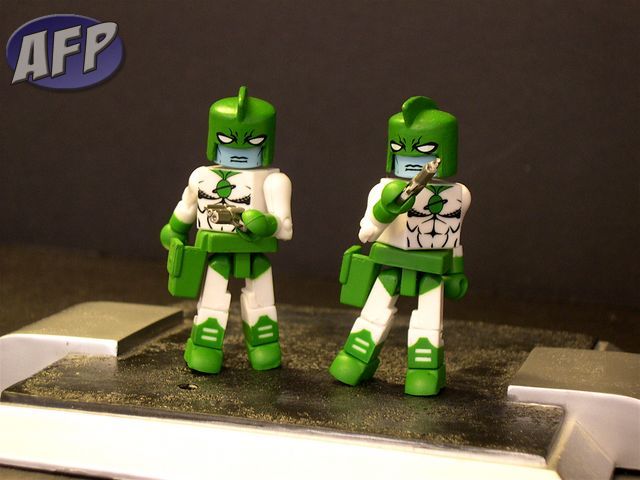 So there you have it, Series 32. Overall a very nice selection of old and new characters, and very well executed in my opinion.

I have a review of Series 31 waiting on the wings, why I’m going backwards I don’t know!! That’s all for now folks! 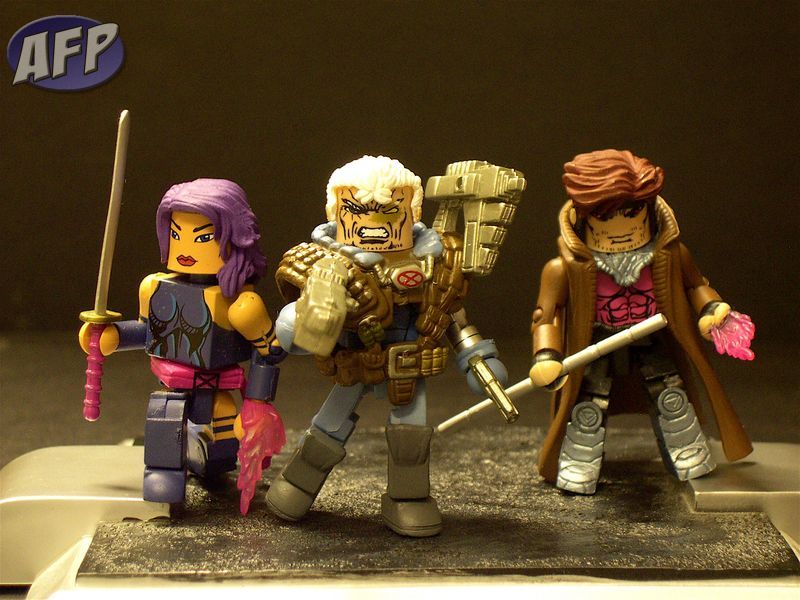