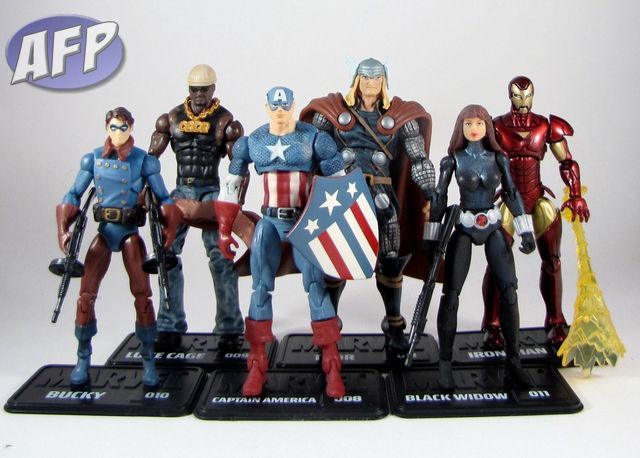 I’ve been a fan of the Marvel Universe line since it first debuted last year, and have been very pleased to see the line get better with each successive wave of figures.  The second wave of 2010 is no exception – I think this is the best wave to hit yet, so I was pretty psyched when our good friends at Hasbro sent over a set of figures for us to review.  Plus, our good fortune can also be your good fortune – our Free Stuff giveaway in March will include some of these figures too (read on for more info).

The cards for this series are standard issue Marvel Universe. For 2010, the line will feature Mike Deodato card art with the Norman Osborne and HAMMER Files theme.  It’s a nice touch to keep current with the goings-on in Marvel Comics.  But as the Siege event is due to unravel Osborne’s machinations in the Marvel Universe, I wonder if there’s a way to tighten up the coupling between toy and comic releases even more.  That’s a pretty tall order, I know.  In any case, I like the cards, and should point out that Luke Cage’s features a callout that he’s one of the Fan’s Choice Poll runner-ups. 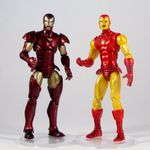 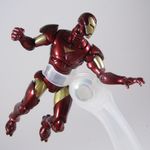 I’m reviewing in the order they’re numbered in the series, but it also happens that Iron Man is also my favorite figure from it. It’s not just that this is the first time we’re getting the Extremis armor in a super-articulated figure. It’s just very well done. The sculpt is fantastic, and Hasbro has included more articulation on this figure than on any previous MU. There are thigh swivels on it that are completely hidden below the thigh armor pieces, and a neck hinge that allows up and down head movement. I also really like the palette choices for the paint.

I have a few nits with the figure. The range of motion in the ankles is not quite there, and the left thigh swivel is somewhat loose. There’s also some residue on the chest, maybe from over application of gloss.  Again, these are just nits – if you are only going to buy one Marvel Universe figure ever, this one should be it! 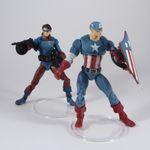 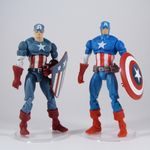 I’m not sure if this is great planning or a fortunate coincidence, but with Iron Man, Captain America, and Thor in this wave, there’s a really nice tie-in to what’s going on in Siege.  Of course, this is the first appearance Cap, so it’s not quite either version that will appear in the story. It’s a reissue of the Cap that been released many times already (Ultimate, classic, Secret Wars, Invaders, and frozen)  this time with a new head with the half cowl and the original scalloped shield, which I’m glad comes with clip and straps so it can be held on his arm or his back.

It’s a good base body, but I’ll be glad to get a Cap with thigh swivels eventually. This figure has an odd tan discoloration on the left side of his chest. 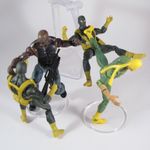 Cage was one of the runner-ups for the Marvel Universe Fan’s Choice Vote from this time last year. He came in 6th, following Archangel, Winter Soldier, Havok, Mystique, and Mary Jane Watson. Of those, all but Mystique have been announced for waves later this year. I think Cage shares the large upper body that the Wrecking Crew has gotten in the Secret Wars line, with new legs. Both his cap and chain are removable, and he comes with a girder has seen better days when Cage wasn’t using it to bash bad guy skulls.

It’s great to have Iron Fist’s Hero for Hire partner in plastic form – they’re both in their modern looks in Marvel Universe, and both were released in their classic duds in Marvel Legends. 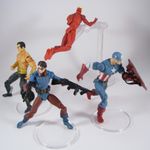 Bucky is a fitting companion to first appearance Cap in this wave. Hasbro designer Dave Vonner says that this is the ass-kicking Bucky that was revamped by Ed Brubaker in his Captain America run. As such, he comes with not one, but two tommy guns for Nazi-killing action. This is the second incarnation of Bucky we’ve gotten in the line – we got Bucky in his Cap costume in Gigantic Battles, and we’ll be getting Bucky as Winter Soldier in a wave later this year.

I like how Hasbro handled the costume details.  It uses an existing body, but adds the collar, jacket front, and belt with an extra piece that goes over the torso without hindering the torso articulation. I like Bucky and first appearance Cap much better than their releases in Marvel Legends. 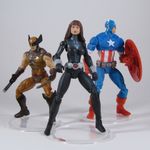 With an appearance in Iron Man 2 for support, Natalya Romanova gets a figure in Marvel Universe. She uses the standard female buck that’s been used for for every female in the line thus far, with new pieces for her wrist shooters and belt. The body is missing some needed articulation points – it has no bicep swivels or elbros, nor does it have thigh swivels.

The head is executed well here, and unlike the Jean Grey figure, the head is seated at a nice height – not too low. The hair piece is made of very flexible material as to not hinder the articulation. We should expect running changes for 2 other hairstyles – both a short haired version and a blond Yelena Belova variants have been shown. 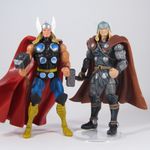 This figure is based on the modern costume designed by Oliver Coipel. Some people have commented on the wide-set eyes, but this is consistent with his appearance in J. Michael Straczynski’s Thor. The similarity of this figure with Diamond Select Toys’ Marvel Select Thor is so striking that I wonder if Gentle Giant worked on both figures.

While Extremis Iron Man is my favorite figure, Thor is a close second.  Here’s another Marvel Universe figure with both ball jointed shoulders and thigh swivels, so I hope Hasbro continues utilizing both in this line.  My only criticism with the figure is the sturdiness of knees – they’re a little loose due in part to the heavy cape.  I’d also have liked a little more up and down motion in his head. 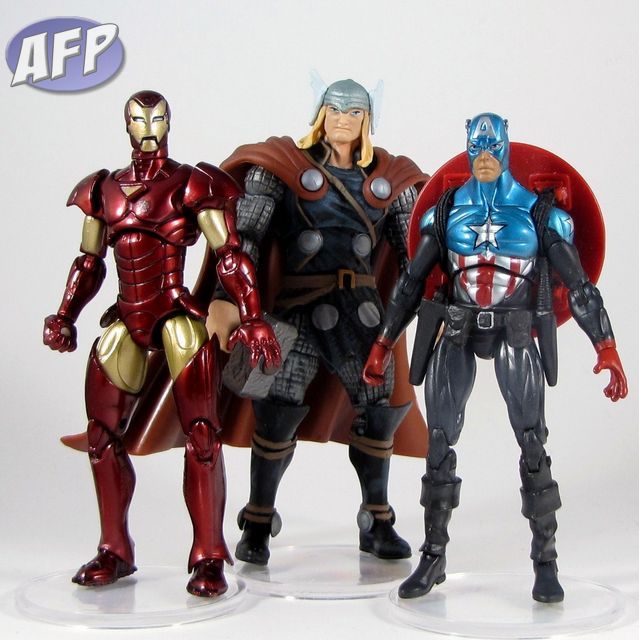 That wraps up this review, but as promised, we’ll be giving away some Marvel Universe figures from this wave in a Free Stuff giveaway in the first half of March.  That prize pack will include six figures, including Extremis Iron Man, Luke Cage, and Thor from this wave. Be sure to sign up for our free subscriptions using the links below for your chance(s) to win.