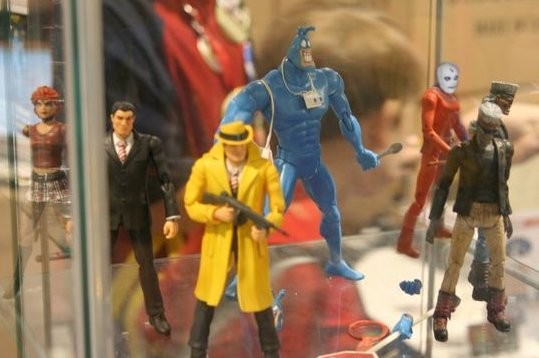 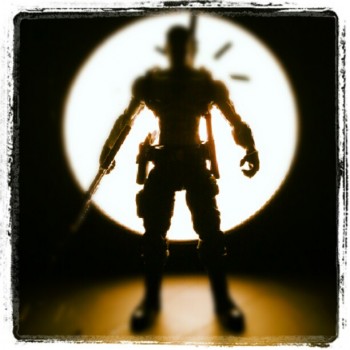 END_OF_DOCUMENT_TOKEN_TO_BE_REPLACED

I’m doing a little catch-up, so apologies if this is old news – I’d been wondering what Hasbro would for follow-up to the huge Marvel Universe Galactus and Sentinel exclusives from San Diego Comic-Con the past two years. And they’ve managed to bring an even bigger item to the show – the SHIELD Heli-Carrier. It will come with two figures – Captain America and SHIELD Agent Maria Hill, and at four massive feet long it will be about a foot longer than the planned retail release – invite another buddy over and have him stick his lunch from Subway on that section where Cap is standing (that’s where you’ll find the extra foot). If you don’t have another friend (or don’t like Subway) you could also invade the Heli-Carrier with your Masters of Evil 3-Pack exclusive.

With special SDCC packaging by Joe Quesada, this will be a massive package to cart around, if you choose to pick one up at the Hasbro booth for the price of 26 Subway subs (aka $129.99). I don’t know where I’d find room for this monstrosity, and I don’t relish the idea of lugging this around the convention floor, so perhaps HasbroToyShop.com will be the better option.

Looking at the cover art, I’ve got to wonder if the MOE 3-pack was originally slated to be a 4-pack to include Whirlwhind. Remember way back when Dave Vonner hinted that he would reveal a character that would blow us away? Whirlwhind would fit the bill a bit better than the actual Toy Fair reveal – Death’s Head. Just add that to the wild speculation file.

Another reveal of Hasbro’s exclusives for San Diego Comic-Con – a 3-pack Marvel Universe set featuring the Masters of Evil. If you haven’t gotten enough Avengers by the time SDCC rolls around, these three villains from arguably the greatest Avengers villain team-up could give you a fix. Dave Vonner dropped big hints at Toy Fair that the MOE would be coming our way this year, and with this set we’re getting Baron Zemo, Radioactive Man, and Tiger Shark.

We’d gotten Zemo during Toy Biz’s Legends run, but that was the elder Heinrich – this is Helmut. So all three characters get their first figures in 4-inch scale (not counting Tiger Shark in Super Hero Squad) – but hopefully Legends versions won’t be far behind.

Fueled by a raging need for vengeance against Captain America, Baron Zemo hatches a masterful plan. Not foolish enough to face the Avengers alone, he strategically forms one of the most powerful groups of villains ever assembled. The Masters of Evil 3-Pack includes Baron Zemo, Radioactive Man and Tiger Shark all appearing in 3.75″ scale, and united for a singular purpose: destroying Earth’s Mightiest Heroes!

Back in April, Dave Vonner hinted at teaming up with fellow Hasbro Alum Scott George during a special edition of the Fwooshcast. At the Philadelphia Comic Con, their collaboration, Kasual Friday, revealed a specialty line of figures. 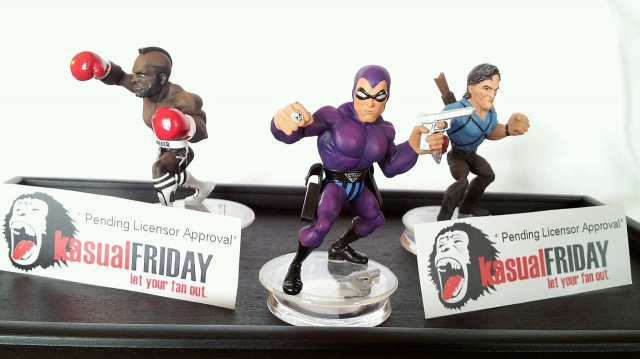 Philadelphia – At Philly Comic Con, Kasual Friday revealed 3 new characters from their upcoming 3″ stylized figure line. Shown for the 1sttime were MGM’s Army of Darkness ASH and CLUBBER LANG along with King Features Syndicate’s THE PHANTOM. These figures will remain on display at Philadelphia Comic Con, Friday and Saturday at theStylinOnline.com booth. Figures will be available Spring 2013.

While at Hasbro, Dave and Scott teamed up to bring us the Marvel Universe line, with Dave on design and Scott on marketing. I’m looking forward to seeing what else they’ll bring to the table with Kasual Friday.

Hasbo released some press pics (the first in a while):

With the Avengers movie just two weeks away, the embargo is lifted on revealing the otherworldy creatures that serve Loki. We first saw a 7-inch Marvel Select version of Loki’s Army at C2E2, and it’s no surprise that Hasbro would also have its own versions, one single carded and one deluxe version.

Dave Vonner told us at Hasbro’s Toy Fair Marvel Universe presentation that we’d be seeing a Miles Morales Ultimate Spider-Man variant in Marvel Universe this year, but we hadn’t heard that a 6-inch version was coming too. I am going to guess the 6-incher will go to the Spider-Man line, instead of Marvel Legends, unless Legends is going back to bases instead of build-a-figure parts.