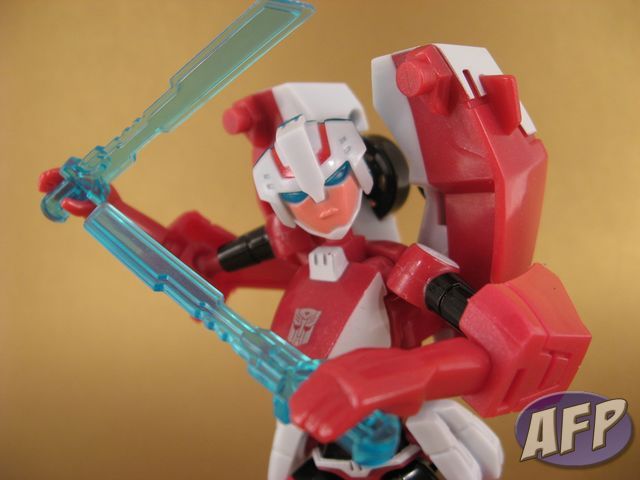 Among the most anticipated Transformer products since it’s inception in 1984, a G1 styled Arcee is finally here. Designed after the character from the now cancelled “Transformers Animated” on Cartoon Network, this is the first time Arcee has gotten the Cybertronian car mode treatment. Most Transformers fans had a long period of time hoping and begging that Hasbro would actually release this figure, and after months (actually probably a year) of waiting, it was announced that Toys R Us would be the exclusive seller of this figure. Is she worth the wait?

There have been wide ranging reports from collectors of quality control issues with this figure, from messy paint jobs, to stress marks on the thumbs and feet, as well as thumbs breaking from holding the swords, and extra plastic flash that needs trimming behind the knees. But with such a long awaited figure finally being released, its easy to forgive these issues once you have one in hand. The paint on mine was very clean, and the metallic sheen to the plastic is amazing. The light piping, as with all Animated figures, is very bright and full of character. This really is one of the best Animated figures to come out, even if she is a little small for a deluxe.

She comes with a few accessories, both of which were  never seen in the show. She has double clear blue swords and 2 giant Rodimus style back fins, both of which are thankfully detachable.

If you can beat the scalpers (and there are plenty of them scalping this figure) and find one of these at your local Toys R Us, then don’t hesitate! Transformers Animated has been a little gem in the Hasbro lineup for the past few years, and with this tail-end release, we can get another little shimmer of that gem.