At some point late tonight or tomorrow, Casimir at Raving Toy Maniac is going to publish the final day of CustomCon 25, and my meager entry, called Dangerous Deities, will get posted. I promised Casimir that I would have this recipe page up by the time that came around, but since I’m not quite sure when he’ll push the button, this is going up at Midnight CST.

I had originally planned to include Hercules as part of one of my entries for CustomCon 24, Marvel Legends Martial Arts Masters (recipes). Herc had been done for quite some time, but I couldn’t come up with a way to pair him up with any of the figures in that entry. Iron Fist and Steel Phoenix made a fine pair, but Shang Chi and Hercules? So, it became a 3-pack. 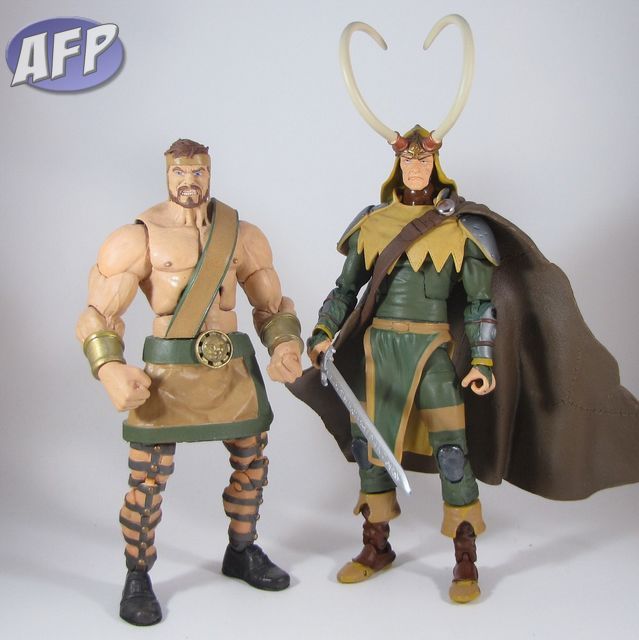 Between submitting two entries of my own and participating in a third, as well as publishing CC24 on the Fwoosh, I was pretty wiped out. So I was surprised when the deadline for CC25 was right around the corner. I felt pretty guilty, because I usually post reminders that the submission deadline was coming. To compensate, I decided to dust off plans I had for a Loki kitbash, to pair him up with Hercules for this CustomCon. Thus, Dangerous Deities was born.

Hercules, the Lion of Olympus 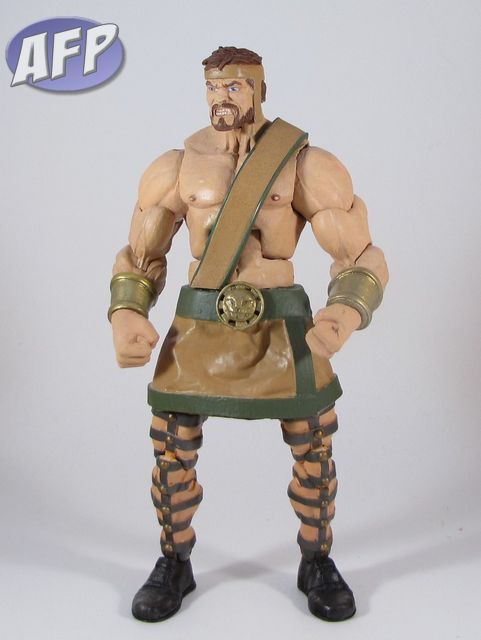 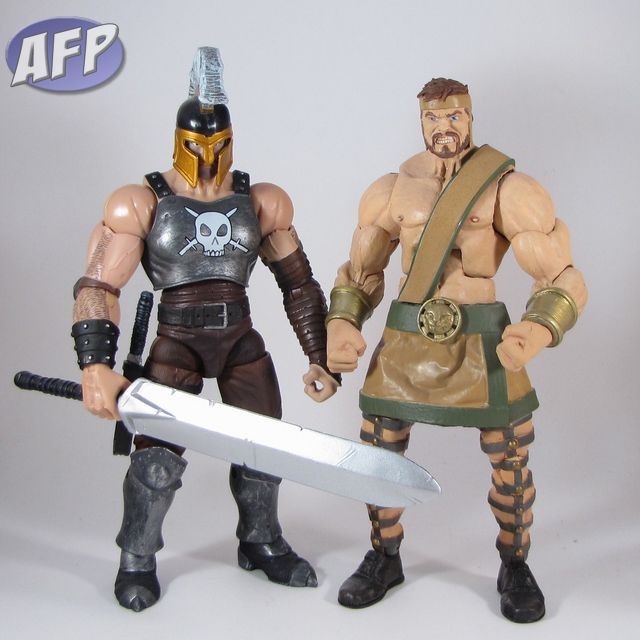 The idea to use a Marvel Select Ultimate Thor head is by no means an original thought. There’s been so many to use it for Herc. And I probably wimped out by using the original ML Hercules’ legs. While it saved me a lot of trouble with all those straps, he looks quite bow-legged. His torso, arms, and crotch are from a Marvel Legends Crossbones – they were left over from a Crossbones kitbash I made way back in 2008. His hands are from a DC Universe Classics Atom Smasher.

I resculpted a portion of the torso. First, I wanted a barrel-chested versus a tapered shape, so I widened him at the waist. I also removed the texture of the padded vest that was originally from the ML Hulkling, and that meant reshaping everything from the rib cage up. I’m fond of how the collarbones and neck turned out.

The wrist bracers are a combination of craft foam and plastic lace over a craft foam “tube” that retains the wrist swivel articulation. The sash is also craft foam and plastic lace. His skirt (only Herc can get away with wearing one) is a combination of ziploc bag, rubber bands, and Apoxie Sculpt. I had grand plans to support it with an armature of plastic lace, but it didn’t work out. It still moves and doesn’t hinder articulation that much, but I think it’s shaped a bit too much like a lampshade – but I won’t be revisiting it any time soon.

Finally, the lion head buckle was constructed with a thumb tack over a craft foam mane (or sun rays) and a plastic lace ring. The face of the lion was sculpted over the thumb tack. I really like how it turned out.

Loki, the God of Mischief 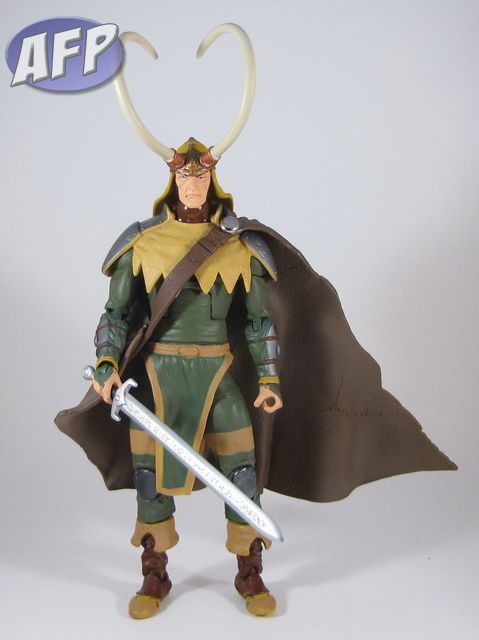 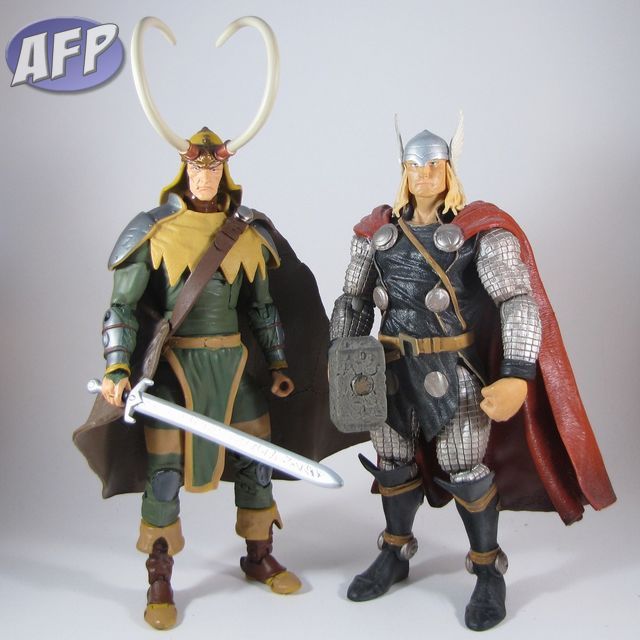 Where Hercules was completed slowly over the course of several months, I put together Loki the weekend before the CustomCon deadline. I had always wanted a Loki that matched up better with the Marvel Select “Coipel” Thor, but never had the right base figure or the time. The new Mattel WWE deluxe figures have articulation that’s comparable to Marvel Legends, and the deluxe Undertaker I had picked up was just the right size. I never thought that Loki should be scrawny, but I like that Thor is still more massive while Loki matches up in height. 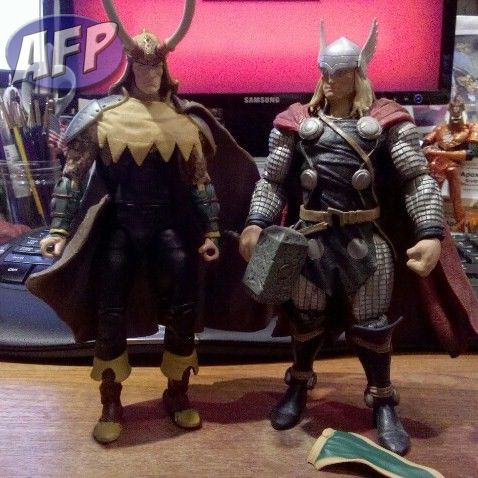 This was a relatively easy kitbash. It’s Loki’s head, cape and shoulder pads, tunic bottom, arms from the elbows down, and boots. Undertaker provides everything else. I did some sculpting to blend the sides of the tunic at his waist – it’s kind of a mess but can’t really be seen. I repainted most of the green and tan to get it to match up with what I had to paint on the Undertaker parts.

The strap for his cape, which the original figure omitted, is made from craft foam. The loops and strap end are painter’s tape folded over and cut to size. I’ve always had trouble making that stuff look ok, and I think this technique works pretty well. The metal buckle is a brad from the craft store. 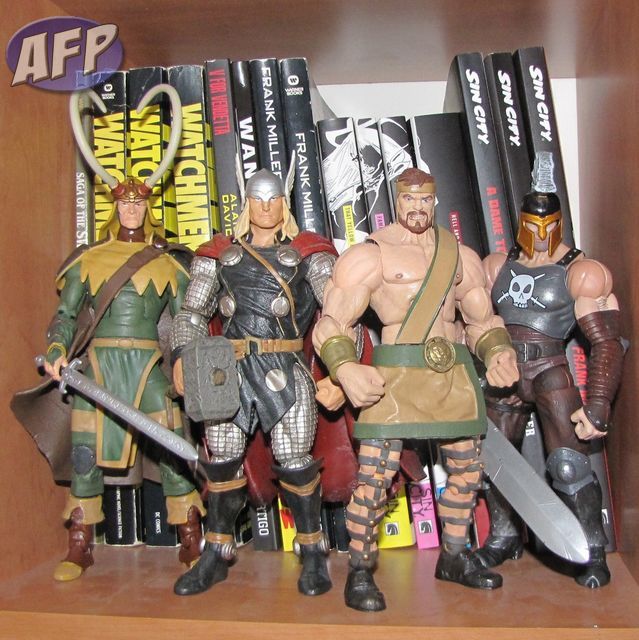 I’m pretty pleased with how both these turned out. I had wanted to upgrade both these figures for a long time, and think they match up a lot better with their siblings now.