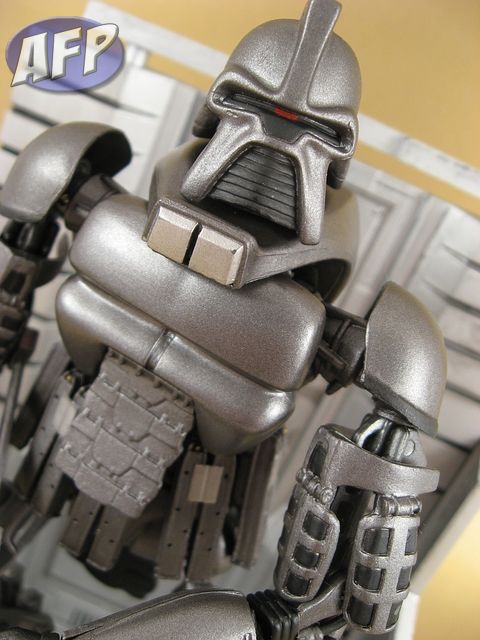 I’ll admit to being an old school “Battlestar” fan, more knowledgeable about the original series than the new. But when I saw this Cylon figure hanging on the pegs at my local Toys R’ Us, i had to pick it up. It has enough of the old look mixed with the new to please the old school fans such as myself.

The articulation on this figure is weird at best. There are lots of cool moving pistons in the shoulders, legs, and arms, but it feels pretty wobbly overall and the leg articulation doesn’t allow for many poses. But this figure is about the look, and it definitely has that down.

He comes with a rather mundane looking machine gun, but it suits the design. Since this is a Stealth Cylon, is has a nice metallic black finish, flat yet still shiny. There are a few rubber parts such as the belt clips and some hoses on the arms and legs. The details under all the armor plating are really nice, looks very skeletal and almost Terminator-like.

As I said, I don’t know much about the new series, but if you like robots and you like toys, then this is definitely up your alley.