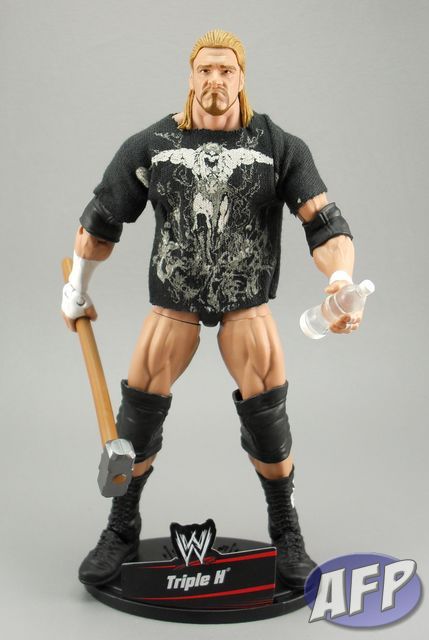 On a recent Toy Safari, I came across a Mattel WWE Elite Series 2 Triple H figure hanging on the pegs at my local Target. Now I’m not a wrestling fan by any stretch of the imagination but being a customizer I could see mucho potential for using the Elite Triple H as a base figure for a barbarian character. Luckily I snapped some pics to throw up here on AFP, before I dismantled him.

Mattel is doing a great job with the Elite figures, the attention to detail and materials used are far superior to what JAKKS was doing/using with their Deluxe Aggression series. The overall sculpt of this particular buck is Herculean, 3H looks massive and imposing. The plastic feels tough and sturdy, it’s obvious Mattel makes these figures to be able to stand some abuse. But no nipples? Why?

As it says on the package, Triple H comes complete with his display stand, name tag and authentic ring attire which includes a removable shirt, elbow pads, knee pads, 9 pound hammer and bottle of water (the King of Kings knows the importance of staying hydrated). His cloth waffle weave shirt (does that make him a doll?) is easy to put on the figure and is secured in the back via Velcro. I’m not a big fan of cloth togs on my action figures as it usually tends to look too bulky and out of scale but Mattel pulled it off very well with this particular shirt. The printed design is very sharp with considerable detail. I know it’s supposed to be 3H but it looks like a very pumped up Jesus to me… or Glenn Danzig. But I digress.

I imagine if you are a fan and collector of WWE figures and haven’t taken the dive into this line yet, you’ll be pretty happy with the Mattel WWE line. For what it’s worth, considering my limited exposure to the line, I think the Triple H figure is one of the best figures in the Elite Series so far.