Update: Toy Guru has posted details on Mattel’s Facebook page. His comments are quoted below. 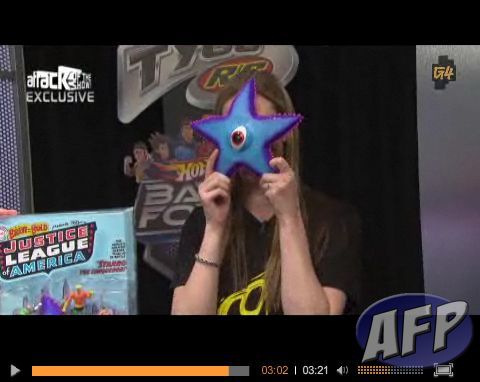 I was lucky enough to be able to watch Mattel’s reveals for their San Diego Comic-Con exclusives on yesterday’s Attack of the Show, but it all went by so quickly. So I took a few screen caps to make sure I didn’t miss anything. Probably still did, so let me know of any glaring omissions.

The grand daddy of our SDCC items for this year. This pack is a recreation of the classic Brave and the Bold cover and features light and sounds as well as the voice of Batman actor Kevin Conroy. Each figure in the set has a recorded description just like a museum display with Kevin describing the origin of each character. It is an incredible package designed by Frank Varela.

And as a bonus, only at SDCC will you get a polly bag set of four 6″ scale Starro Spores that work with most DCUC action figures! The Starro Spores are only available at the show as a gift with purchase! $50.00

The packaging recreates the cover of the Brave and the Bold #28, a classic comic book that brought together the Justice League of America for the first time. I’m guessing that the large Starro is not bendable, just from how Blair Butler is holding it in the short clip at near the end of the segment.

I’ll also guess that there will be five mini-Starro face-huggers included, one for each of the DC Infinite Heroes included – Flash, Green Lantern, Aquaman, Wonder Woman, and Martian Manhunter. They showed only four of them on the turntable, but I think the one that was in front of the Flash was actually used on the DC Universe Classics Hal Jordan, who is not included in the set. The face-huggers weren’t featured in the Brave and the Bold issue – they were introduced in a two-part JLA story in issues #189 and #190. [Update: I guess it’s four, and only at SDCC. I feel a disturbance in the Force.]

It’sAllTrue.net pointed out the yellow gloves on Aquaman, and I’ve seen a bunch of folks taking note of the metallic green on the DCUC Hal. I am wondering if that’s the deco for the upcoming Hal for the Wal-Mart Green Lantern 5-pack announced at Toy Fair, even though we were told that the Hal in that set would include gray temples. I suppose we’ll find out soon enough.

Plasti comes with a ton of accessories and does everything plastic can do. He has standard arms, stretchy arms, snap on stretch parts like a fly swatter and paddle ball. He also has a snap on bendy neck piece and a spring snap on leg piece.

And only at SDCC you can get Plastic Man as a suit case (similar to Gleek). you can even snap on his arms and head to the suitcase as if he has been “shopping at SDCC”. Open the case up for an extra surprise.

Plastic Man will be on MattyCollector.com after the show, but the suitcase is only a gift with purchase at SDCC. $20.00

Plas looks like he’ll be coming with a boatload of accessories, including a suitcase attachment that opens up. Remember, that suitcase is the piece that’s exclusive to SDCC, and won’t be available when Plas is sold on mattycollector.com.

The other accessories I saw were: regular arms and legs, paddle ball and flyswatter attachments, stretchy arms, and a bouncy spring that attaches to the torso at the waist.

I wonder if the long neck is a separate piece too, allowing for both stretched out and normal necks.

Masters of the Universe Classics Skeletor vs. Mo-Larr

This box set will be $40.00 both at SDCC and on MattyCollector.com after the show (no change to product). Mo-Larr will come with all his tools including his drill and his floss. Skeletor features a new toothless face and comes with his Havok Staff, Power Sword and half Power Sword. The pack out is truly epic as designed by Ray Makowski. It includes Skeletor’s massage chair and magazine collection as chip art. Also features brand new bios supplied by the gang at Robot Chicken!

I have bigger pictures from our visit to Mattel at San Diego Comic-Con. In addition to the vice grip that’s holding Skeletor’s missing tooth, you’ll get three additional dental tools that look designed to inflict pain, straight from the end of that commercial in that Robot Chicken “Eternian Dentist” sketch.

Masters of the Universe Classics Orko with Prince Adam pack-in

So here is the first of our SDCC items that will be different after the show. The version of Orko at SDCC will feature color change when you dip him in warm water. His magic book also show the SDCC logo in hot water. The version sold on MattyCollector.com after the show will not be color change (on Orko or the book) but both version will include his stand, wand and book as well as a pack in Prince Adam with two heads (He-Man and new Prince Adam smirk) as well as a purple Power Sword and half purple Power Sword.

The bio on the back belongs to Orko as this is his figure. Adam is his accessory! The only difference between the SDCC version and the MattyCollector.com version is the color change feature. $25.00

A lot of fans have asked “why Orko for SDCC?” Well, simple. We chose Orko because we wanted to go with a more ‘A’ list MOTU character who would draw in fans otherwise unfamiliar with the current line. In the past our SDCC items have been a bit more obscure in character selection so we deliberately went the other way this year. Also, since Orko was larger then a “standard” accessory we had no way to fit him into a monthly $20.00 figure structure. But by pairing him with Adam we could do a unique structure for a unique price ($25.00) at the show. One of the whole points of an SDCC item is to get PR for a line and to do an item that wouldn’t fit into the standard line due to size, theme etc… This fit the bill in a lot of ways!

Toy Guru revealed to us in an Ask Matty Q&A way back in June last year that Orko would be coming in 2010. He said, “We know exactly how and when Orko will be in the line. He’s coming sometime in 2010.” This leads me to believe that they always planned for Adam to be the “accessory” in an SDCC exclusive 2-pack.

Both Orko and his spellbook interact with hot water. Orko effectively “disappears” by turning transparent, and the San Diego Comic-Con logo appears on Orko’s spell book. The logo is a nice throwback to the MOTUC SDCC exclusive He-Ro from last year.

My interpretation is that both hot water effects are exclusive to the San Diego Comic-Con versions of the 2-pack. You can see a solid Orko in the shot where Toy Guru lifts the transparent Orko out of the hot water.

In one shot of Prince Adam, Blair Butler is holding what looks like a headsculpt from the original MOTUC He-Man release, with grimace that’s been re-released with He-Man’s “The Original” re-release, the Battle Armor He-Man, and the He-Man from the DC Universe Classics vs Masters of the Universe Classics 2-pack with Superman. The headsculpt on Adam has that somewhat goofy smile Adam always had on the cartoon. In another shot, you can see alternate head on the table by Prince Adam’s feet – I’m guessing that both heads will be included in the package.

Mattel will have another segment on Attack of the Show on Thursday, April 15, giving those of us with big tax bills something to look forward to that day. I caught glimpses of a battle-damaged AMP and Navi (is that a warrior Jake Sully?) – the AMP has a broken windshield, like Quaritch’s in the climax of the Avatar movie.

Toy Guru has been hinting at animated Ghostbusters for some time. Like many folks, I had thought that they would come out in 3.75-inch scale to give them the option for playsets and an Ecto-1, but it looks like The Real Ghostbusters will be first making their appearance in the Retro Action line of 8-inch Mego-replicas.

And they also showed several flashes of WWE figures. The one that stood out was a Ministry of Darkness version of the Undertaker. Perhaps there’s more WWE exclusives to be revealed on Thursday.