J Hernandez from the Fwoosh helps us continue AFP Iron Mania with a review of the Wal-Mart Exclusive 6-inch Iron Man Mark VI and War Machine. 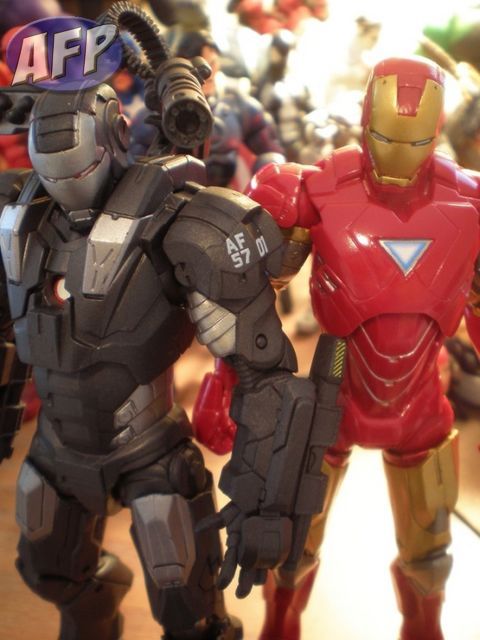 Here we have Wal-Mart’s exclusive 6″ scale Iron Man 2 figures (Mark VI and War Machine.) At first glance, they’re definitely some swanky looking figures and by far a vast improvement upon the Iron Man figures Hasbro delivered to us in 2008.

Like most Hasbro Marvel Legends these are in a true 6″ scale. They fit in more w/Hasbro’s Marvel Legend buck bodies, but they will be towered over a bit with old school Toy Biz Legends.

In hand, these things are sturdy. One of the problems with Hasbro’s initial Iron Man figures in 2008 was that they were just too scrawny. These things have some bulk. I mean, they realistically are built to look like a dude in a suit of heavy, iron armor, whereas 2008’s looked like a literal “Iron Man.”

Also, one has to appreciate the addition of extra hands (something Hasbro generously began w/their Marvel Legends 2 Packs this past year.) In addition, the MkVI comes with one of those little missile/energy launchers the 2008 versions came with while War Machine comes with his signature weaponry that snaps easily onto his back.

I think my only complaint w/these figure(s) is the color choices for the Mark VI. I could do w/alot more flat and a lot let gloss. Kind of cheapens the look of the figure a little bit, but this is just my opinion and I must add I’m reeeeeeeally being pretty nit-picky about it. The look of the arc reactor also leaves a little bit to be desired as well. Kind of looks a bit like a decal, but, again, just being nit-picky, here.

Overall, for $13 a piece I’d say they’re well worth it. Some may say it’s a bit much to pay for a 6″ figure, but with what we’ve paid in price in the past for DCUC and the past few waves of Marvel Legends these aren’t to far off from the mark. Again, these are only an exclusive to Wal-Mart stores and so far they’ve been found in Vancouver and the Southeastern part of the United States.