During their Marvel panel at San Diego Comic-Con today, Hasbro announced that in 2011 we would see an Iron Man Legends 6-inch line with broad distribution. This would lead in to 2012, with a relaunch of Marvel Legends in the 6-inch scale.

Long-time Marvel Legends fans will remember Crimson Dynamo and Titanium Man – they were first announced at Toy Fair in 2009 and then were removed from their display booth before the opening of San Diego Comic-Con last year. We’ve seen test shots that were sold on eBay since then, but this is the first time we’ve seen Hasbro make a definitive statement that these will hit shelves – well, at least since the first time at Toy Fair.

I suspect we will see more figures like the Hulkbuster Iron Man and War Machine in this line – reuses and repaints of the existing stable of 6-inch Iron Man figures that have been exclusive to Wal-Mart and Target thus far. To really satisfy the collector base, I think Hasbro will need to include more unique characters – but in a non-movie year, I’d be pleasantly surprised if we do get more than repaints, aside from Crimson Dynamo and Titanium Man. 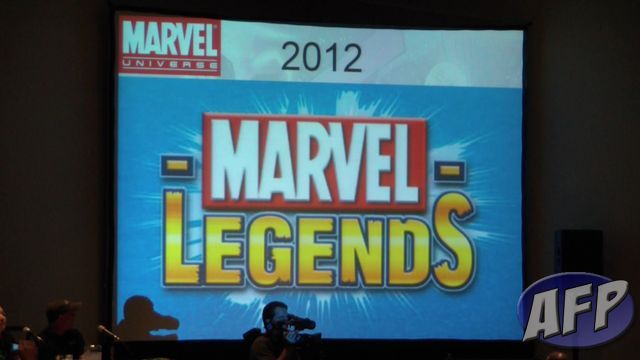 The reception for Hasbro’s upcoming Marvel Legends 2-packs, featuring Deadpool / Warpath, Black Widow / Winter Soldier, and Valkyrie / Hulk, have been well-received. I think that Hasbro has come a long way in meeting collectors’ expectations for Legends. Coupled with what appears to be solid performance of the last wave and a half of 2-packs, Hasbro is planning for a big return of the 6-inch scale for Marvel.

Yes, 2012 is still a year and a half away, but what I hope this means for the line is that Hasbro will come up with a product strategy that allows for a lot of leverage from new body sculpts, with reuse like what we’re getting in the 2-packs – there’s enough uniqueness in the added parts for this wave that I don’t even notice the reused base bodies. This will be needed to keep the line financially viable.

I know Hasbro wouldn’t go out on a limb to announce this so far in advance without being fully committed to the relaunch, but I’ll try to remind myself that a lot can change in 17 months. If performance of Iron Man Legends is abysmal, for example, that could put plans for a Marvel Legends relaunch in jeopardy. But I’ll remain positively optimistic for the return of one of my favorite toy lines.

What are your thoughts?