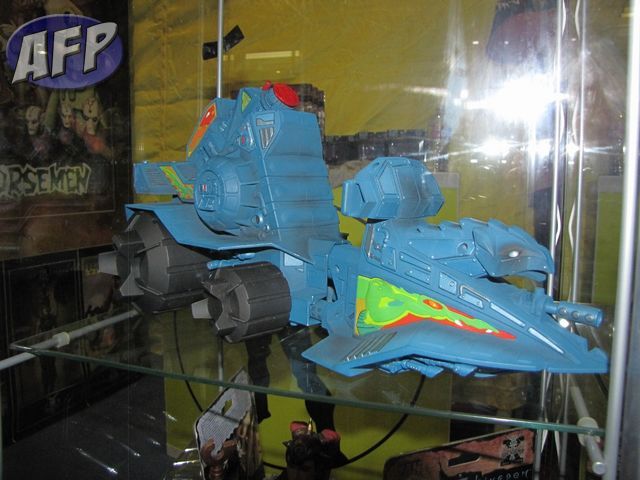 At the Mattel Mattypalooza panel at San Diego Comic-Con last Friday, Toy Guru announced (among a ton of other things) that one vehicle would be sold as part of the  Masters of the Universe Classics line (not as part of the Club Eternia subscription – thanks for the correction, Matt) in the fourth quarter of 2011. The next day, we visited the Four Horsemen at their booth (shared with ActionFigureXpress) and we saw this piece – their concept for a Masters of the Universe Classics Battle Ram. Wow!

Cornboy was very clear – this is *not* the vehicle in the Club Eternia sub – at least, not yet. The Four Horsemen produced this piece to show Mattel what they are capable of if they were to get the job to produce the vehicles for the line. And it’s an incredible piece. It captures the essence of the original – it comes apart to form two vehicles and it has a spring-loaded missle, for example.

The concept piece also has some great updates to the original. Where the original vehicle has stickers, the Four Horsemen put in actual sculpted detail and paint. They plan to add a bigger ledge in the rear with foot pegs, spruce up the handle grips, and add even more detail to the piece.

Will Mattel produce the Four Horsemen’s Battle Ram? The jury is still out, but I sure hope they do.