Robokillah picked the Square Enix version of Ezio for the Fwoosh Best of SDCC article, but if he was looking for less expensive alternatives to the Hot Toys Ezio, NECA may have just the figures.

NECA’s got an Ezio for every taste

Assassin’s Creed II is one of our favorite action games ever, and we couldn’t be more thrilled to show off our two new figures of the main character, Ezio! 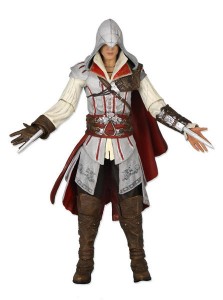 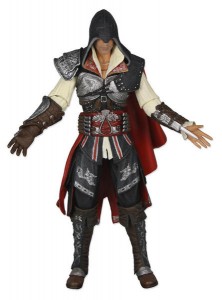 He might be the most enduring game nobleman since Simon Belmont, and in ACII, Ezio Auditore da Firenze is inhabited by Desmond Miles, who lives out genetic memory in Renaissance Italy from the future via the Animus 2.0. Sounds complicated, and it is, but what it rounds out to is one of the coolest and most intricate games ever, and the winner of Best Action Game at the 2009 Spike Video Game Awards.

Our figure of this highly requested fan favorite stands 7” tall and has over 20 points of articulation. Ezio is available in two different versions, Standard or Black, and each figure features retractable wrist blades and intricate, game-accurate costume design and detail.

Ezio is set to feature in the next sequel to Assassins Creed, dubbed Assassin’s Creed: Brotherhood, which is due November 12, 2010 from Ubisoft, and our assortment of figures ships in September and of course will also be featured on our Amazon storefront