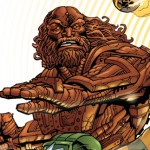 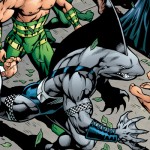 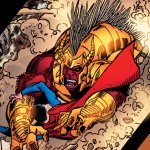 If you were wondering where the Toyfare poll for the 2010 DC Universe Fan Choice was, you’re probably in good company – it was nowhere to be found on the revamped Wizard World / Toyfare site. But thanks to you favorite search engines, I found the poll, which for the first time is to pick the Collect & Connect figure, for DC Universe Classics wave 20. 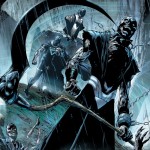 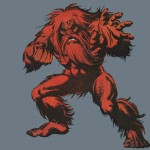 Out of the choices available, the smart money is on Nekron – he was the big bad in the recent ultra-popular Blackest Night miniseries, and anything Lantern-related is hot right now, with the potential Green Lantern blockbuster movie starring Ryan Reynolds due out next summer. If Mattel was a risk-taking company (they’re not), they would probably be tooling up old Nekron as we speak.

But I want us to show Mattel that we can make the unexpected, better choice. So I’m making an impassioned plea to you, to vote for Shaggy Man in the DC Universe Fan Choice Poll for 2010.

First of all, Shaggy Man would make a kick-ass Collect & Connect figure. Shaggy Man is, well, he’s a giant hairy beast – and we all know how awesome the Four Horsemen do with big hairy beasts. Check out the upcoming figures of Gygor and Shadow Beast from the Masters of the Universe Classics line. Shaggy Man would be a little less ape-like in proportions, but he’d still be awesome coming from the 4H. 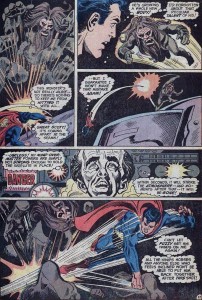 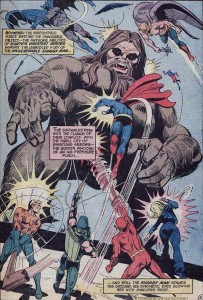 He’s also a classic villain that you can pit against your entire Justice League of America. He’s fought them to a standstill several times, like in JLA #104 (pictured above) way back in the 1970’s – that was my first introduction to him, in a pile of old JLA comics in my uncle’s stash. In this story, Hector Hammond (whom I imagine we’ll be getting in figure form when the Green Lantern movie figures come out) uses his mental powers to get a virtually indestructible Shaggy Man to attack the Justice League on their satellite.

Finally, he’s got a great power that would be very cool to represent with the Collect & Connect pieces. What makes him indestructible is his ability to quickly regenerate his body. In this JLA story, for example, Superman goes to town on him, smashing Shaggy Man into pieces – only to find that Shaggy Man rejuvenates himself after each explosive blow. I’d like to see the Collect & Connect figure be easily “shattered” by making the pieces come apart more easily, so Shaggy could blow up and get put back together again.

There’s three reasons to pick Shaggy Man! Don’t forget to vote, and leave a comment below on why or why not Shaggy Man for DCUC wave 20! Now here’s the official poll text.

The stakes are larger than ever (literally!) in our third annual DC Universe Classics Fan Choice Poll

You know what they say: once is happenstance. Twice is coincidence. Three times is really friggin’ awesome. Especially when the third time is bigger and better than ever before!

ToyFare is honored to host the third Mattel DC Universe Classics Fan Choice Poll. You’ll remember that in 2008 fans chose The Question, and last year you guys selected Teen Titans’ own Raven (who’ll be appearing in Wave 15 this fall). But for this third poll, the winner will actually become a wave-anchoring Collect and Connect build-a-figure figure for 2011’s DCUC Wave 20, standing between 8 and 10 inches tall. Choose from a wretched hive of scum and villainy, a nominee list populated mostly with big baddies and assorted other n’er-do-wells. The winner will become a larger-than-life plastic reality. And the choice is in your hands!

Have a hands-down favorite? Cast your vote today—voting ends August 31!