Does Robert Rodriguez ever stop working? I still haven’t seen Predators, and already Machete is right around the corner. But really, I’m wondering when Sin City 2 is gonna make it to the big screen. 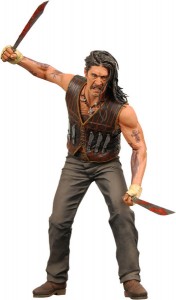 Machete Cut Down To Size

Because a house isn’t a home without Danny Trejo.

He is one of the ultimate cult film icons of all-time, and now he finally gets his time in the limelight. Danny Trejo is Machete. A renegade with a flying motorcycle, a penchant for making things blow up, and a keen sense of revenge for those who’ve wronged him. Sound good? You know it does.

Directed by Robert Rodriguez, the movie Machete is based on one of the fake trailers that preceded 2007’s Grindhouse. and it features Trejo in the role he was born to play: a deadly ex-Federale who’s just as much on the hunt as he is on the run, stacking up a body count along the way that would make Rambo blush. Forget the summer. This is the feel-good hit of your life!

NECA is proud to help immortalize Trejo in his first starring role as Machete, and we couldn’t be happier to unveil our new Machete 7″ action figure, which comes complete with Trejo’s likeness (yes, that is a special feature) and his character’s trademark weapon. You’ll never guess what it is.

So join us in celebrating the release of this slab of awesomeness and raise your machete high. May it be the first of many sequels — both the movie and the figure.

Machete opens Sept. 3, and our figures will be in stores later that month, and of course will also be featured on our Amazon storefront