After missing a round (kind of) two weeks ago, we’re back with our regularly scheduled Ask Matty. Thanks to Toy Guru and the team and Mattel!

1) Great showing at San Diego Comic-Con! Many of the 2-ups shown from DC Universe Classics wave 16 and Green Lantern Classics featured double elbow and double knee joints. Is the plan to carry that through to production? I think the new joints would break up the sculpt less when posing (no awkward break in the knee cap, for example) and would provide more posing options. 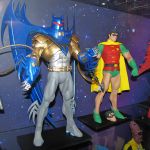 We are adding more articulation to some figures where appropriate.  We don’t want to cut up the Horsemen’s sculpts just for the sake of articulation; only when it works for the characters.

2) The new Masters of the Universe Classics reveals were awesome. For Club Eternia subscribers, one thing I’ve seen folks worry about is spikes in the monthly amounts. For example, if the subscription was all-in this year, November would be a huge month with Grizzlor (monthly), King Grayskull (bonus), and Eternian Guards (large). That’s a big bill for folks on a budget. How are you spreading things out in 2011 to avoid spikes like that?

We deliberately tried to spread out the “beasts” and A-list variants so they don’t fall on the same month, but this won’t always happen. It depends on sculpting and schedule. But we are trying for this.

3) A couple quick questions – Is the MOTUC Vikor’s helmet removable? Any chance for headgear for Grizzlor, like the Staction, for 200X fans?

No, Vikor’s helmet is not removable.

4) AFP reader Paul asks: I love the fact that MattyCollector recognized the collectors agony when trying to purchase DCU Classics Wave 5 Metallo series and doing a re-release on MattyCollector. My question is how successful was that re-release (and other recent waves) and do you foresee doing that with any of the other harder to find waves (example: DCU Classics Wave 3 Solomon Grundy series). [Note – the Legion of Super Heroes 12-pack seems to be a good sign – are other DCUC products possible for MattyCollector?]

Wave 5 was a success for us and we are looking at other re-releases down the road. We need to clear through some inventory at retail first as there may be some older waves sill out there to release in retailers distribution centers first.

5) AFP reader Paul asks: Would you ever do a “Weapons Pak” like you did for MOTUC line? It would be cool if they did a pack that was full of Green Lantern constructs (a la John Stewart & Katma Tui) that could be various sizes and colors……maybe even a big one that could fit Killowog (ok I’m dreaming on that one but still, AWESOME).

It is something we have looked into, but the trouble is that outside of constructs there are not many weapons that would work. The upcoming Sinestro vs Hal TRU 2-pack will have quite a few constructs done just this way!