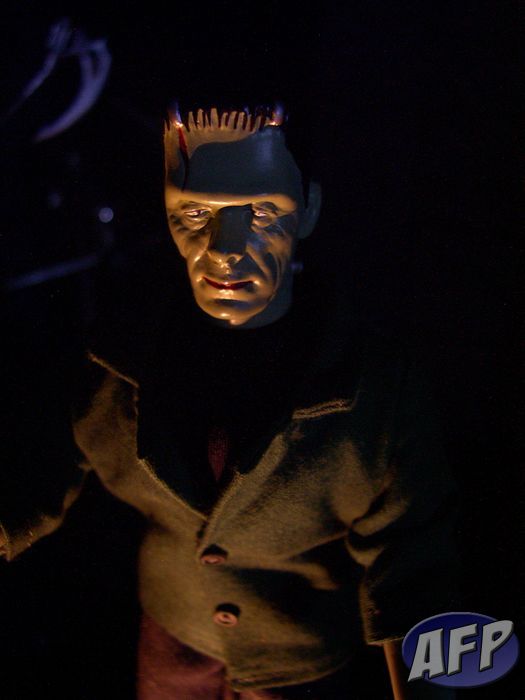 I never owned MEGOs when I was a kid, so I’m not all that familiar with them. As an adult, I’ve seen them being used in Robot Chicken and Toyfare, even in the movie “The 40-Year Old Virgin”, and I know that they are classic toys, but I never purchased any of them.

Now they have made sort of a comeback with EMCE starting to work on various licenses like the Mattel’s DC Retro Action Heroes and Bif Bang Pow’s Venture Brothers, and they have caught my attention lately. The price had been keeping me from buying any ($19.99 in most retailers), but I decided to try them by purchasing a Brock Samson. I loved Brock so much that when I stumbled upon an Aquaman and Black Manta at T.J. Maxx for $9.99 each I had to pick them up too. When I saw Universal Studios Classic Frankenstein at Toys ‘R’ Us last week, he looked so good I knew I had to pick him up! Am I ill with Mego Madness?

Now I have to admit I have never seen any of the original Universal Monster movies, I just know them because those movies kind of created iconic versions of these monsters. As far as accuracy to the old movies, I haven’t a clue, all I know is Frankenstein here looks cool and I’d love to have all these iconic monsters in my toy shelf in MEGO form! 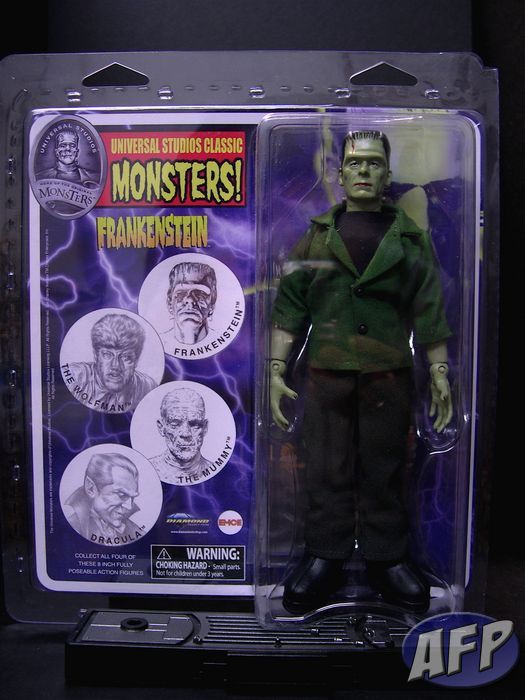 The good thing about his packaging is that you can salvage the plastic blister by slicing at the tabs. I just used an x-acto knife to cut where the tabs are at so that I could put him back in his plastic blister if I wanted him displayed in-package! 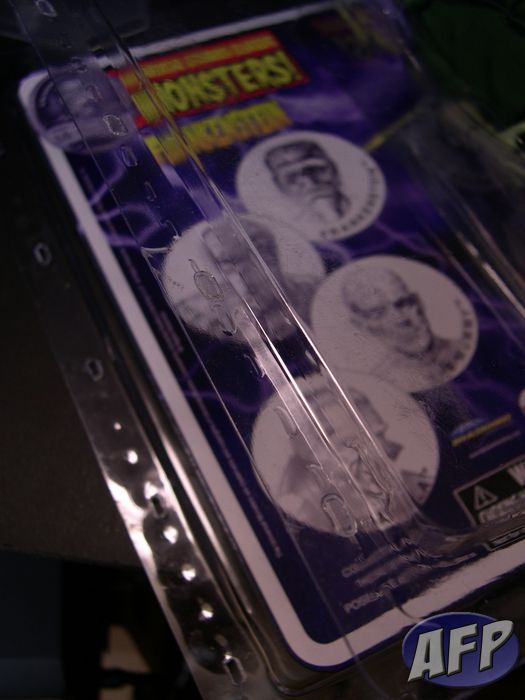 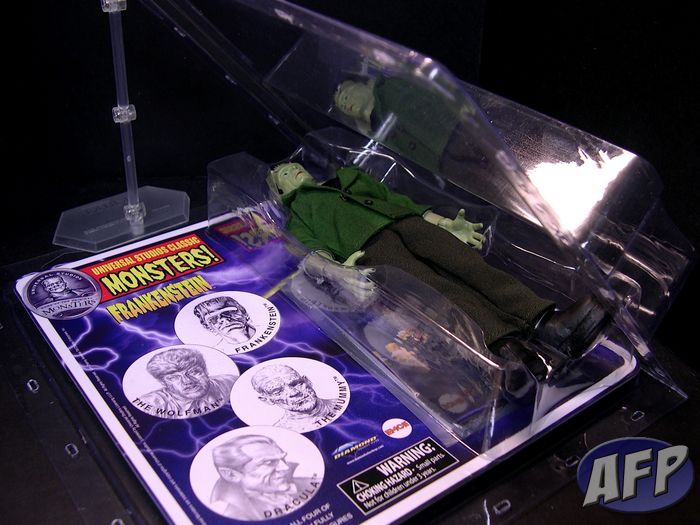 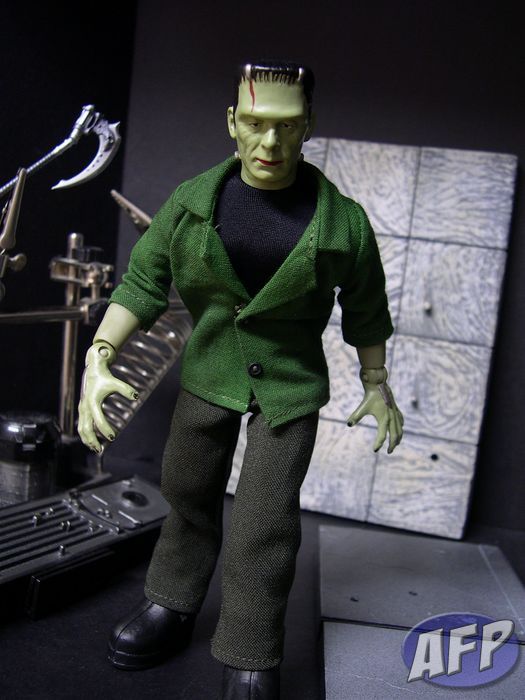 The tailoring of the clothes and the sculpt on Frankenstein are cleaner compared to the Venture Bros. MEGOs. Then again, I have a feeling the creators of the Venture Bros. wanted their figures to have the old school look, thus they have that rougher appearance which reflects the older MEGOs. Frankie here just looks more sleeker compared to the Brock and Dean that I have. 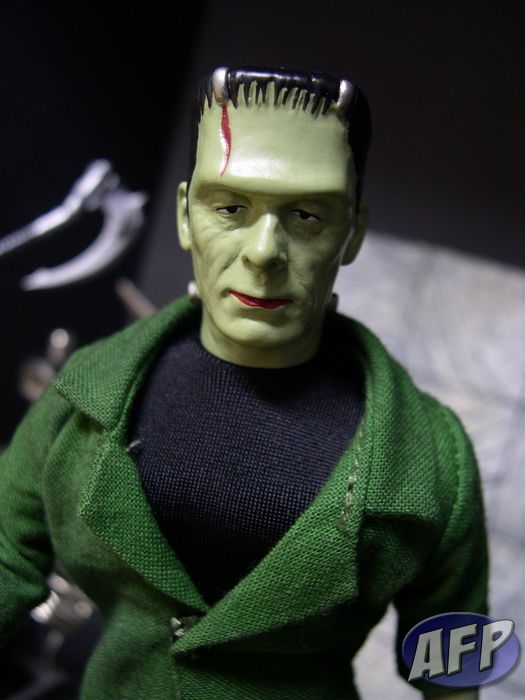 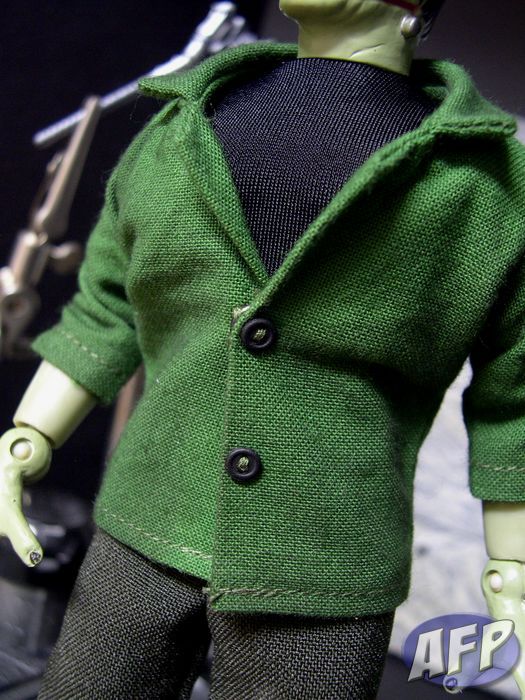 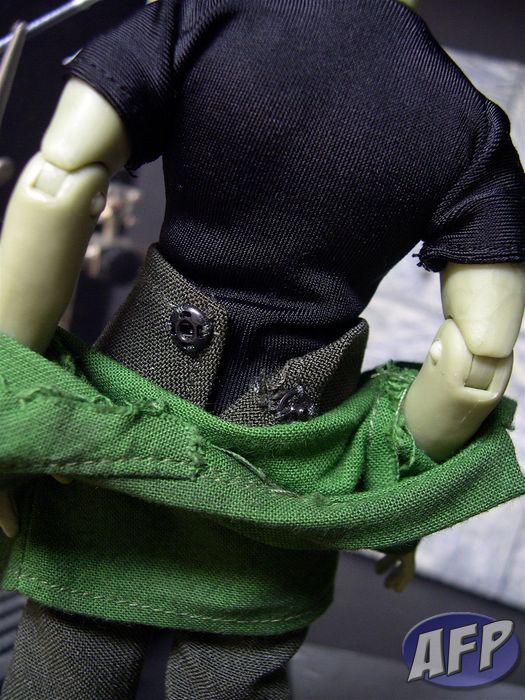 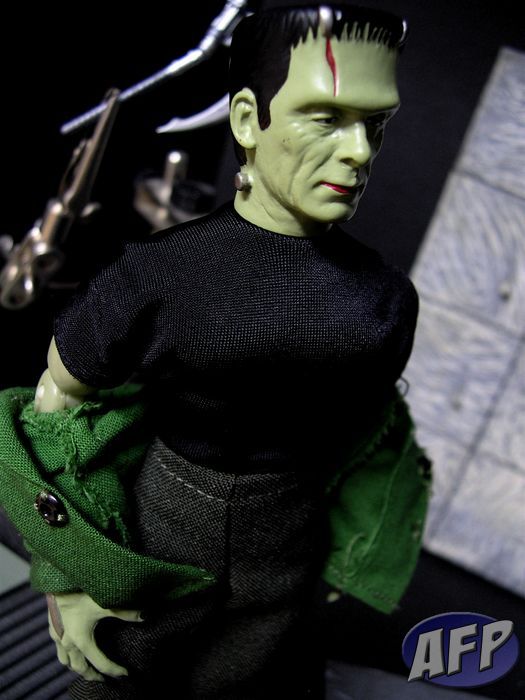 The buttons are small and less obvious, and I love the head sculpt and his hands. I also like the oversized shoes. His black shirt inside is like a baby body suit, with a velcro attachment at the crotch. My apologies for not taking pics of this, I really did not feel like taking off all his clothes! If you all want the nekkid pics of MEGOs in future reviews let me know!

I love the fabric that they used and the colors. I would have loved to see some subtle shading on his face and arms, especially his face, it would’ve made him creepier. 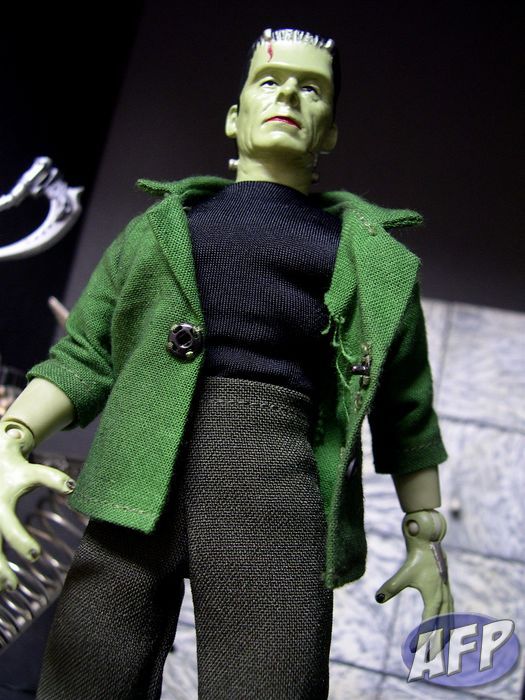 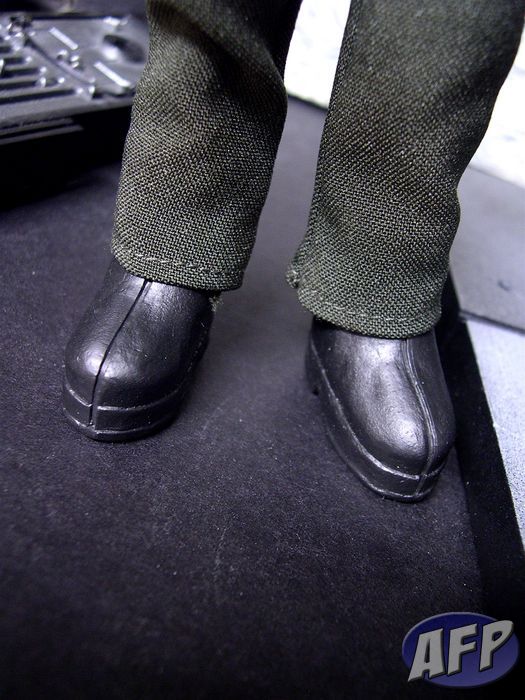 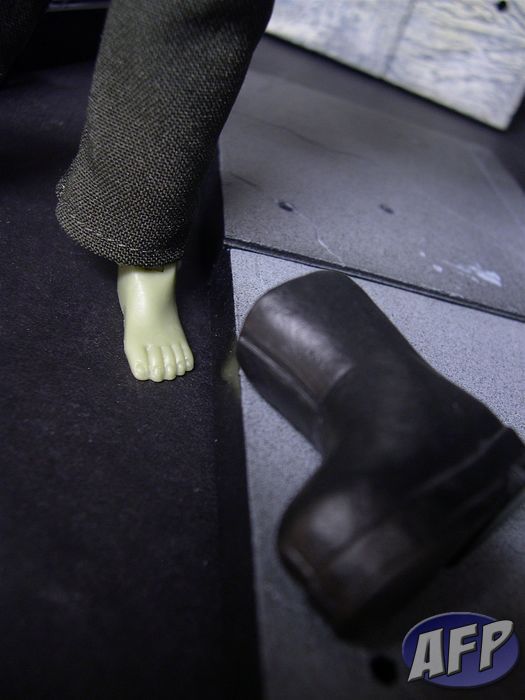 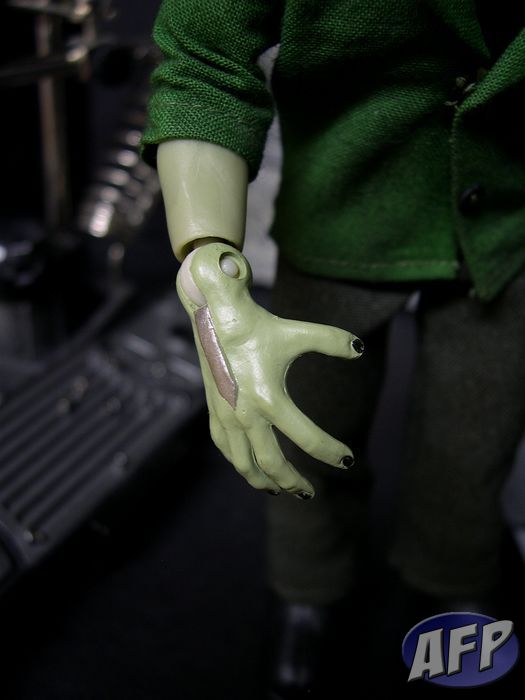 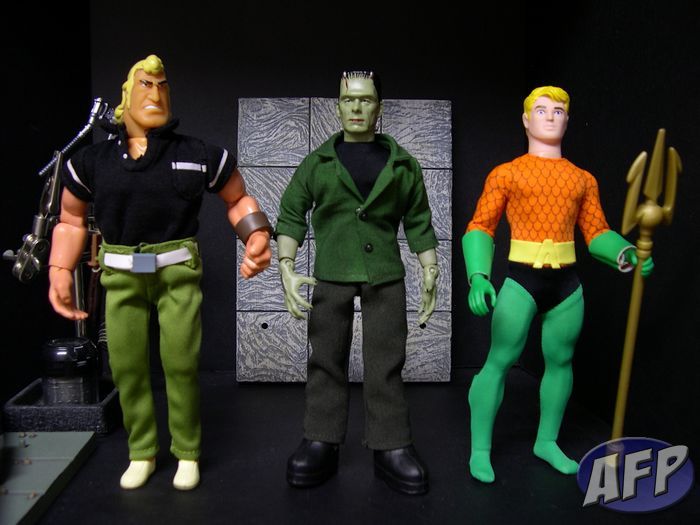 His articulation is typical MEGO, the rubber bands that hold his joints together are quite firm. I do wish he had a ball-jointed head though! Also for all you classic MEGO owners, how do the rubber bands hold up over time? I do worry about the bands, I hope they don’t get brittle like some rubber bands do over time. 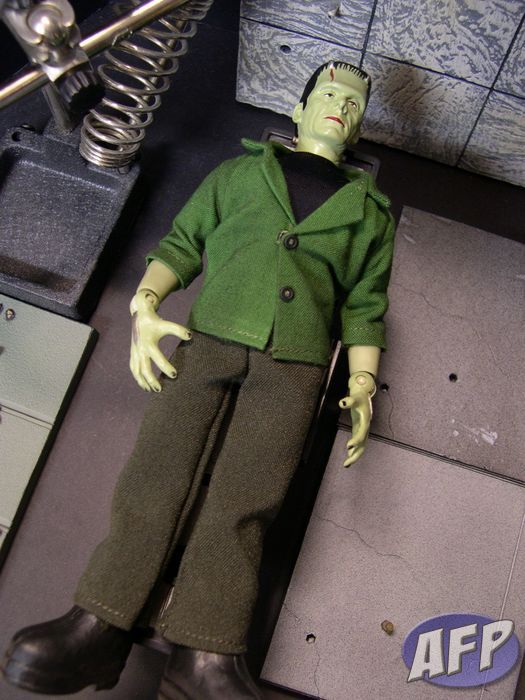 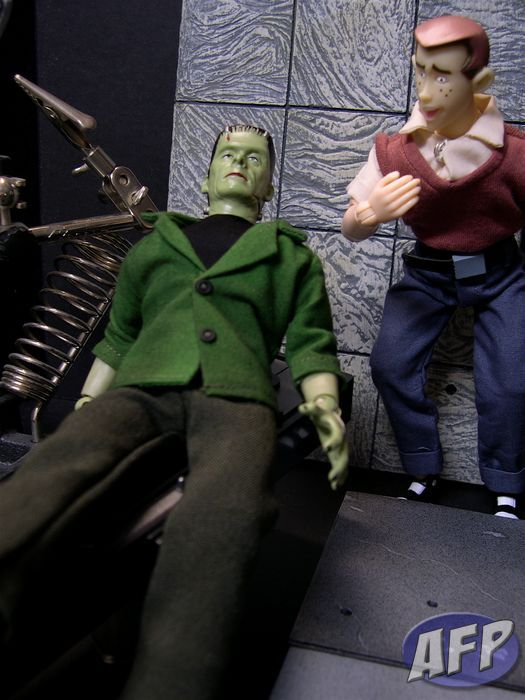 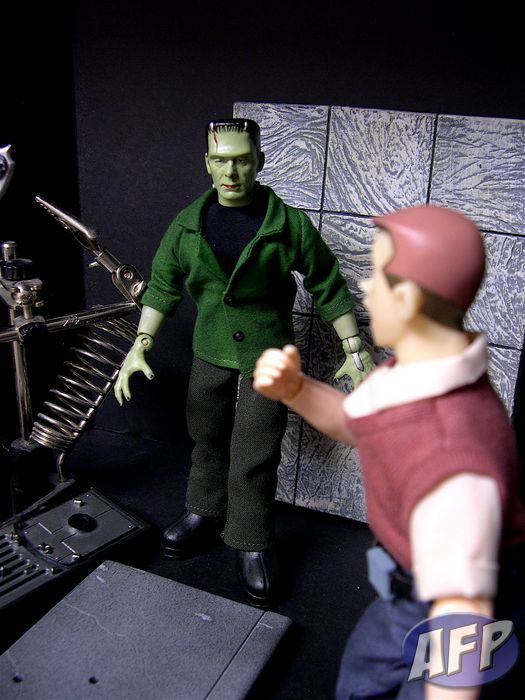 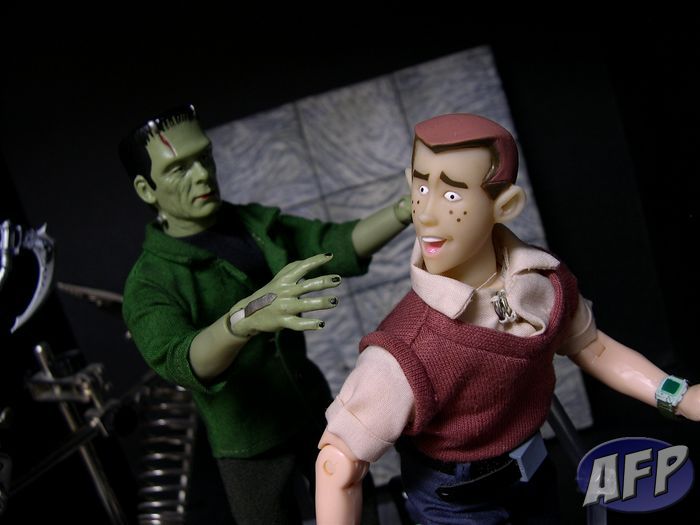 I’ve recently picked up the Wolfman too, but haven’t gotten to opening him yet.

I have to say I really like this Universal Studios Classics Frankenstein, and I have enjoyed picking up some of these MEGO-style figures. Pricy as they are, I do love the idea of having an iconic movie monsters line up in my toy shelf, so most likely I’ll be completing this line. I believe they have a Dracula and the Mummy coming out soon!

Well that’s it! Thanks for looking and I hope you all enjoyed the pics! 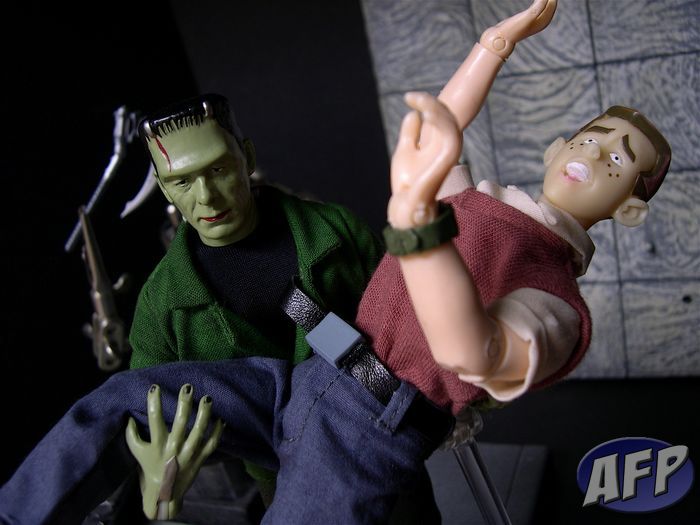