I like that Mattel has joined the digital age when conducting its Fan Polls for Masters of the Universe Classics. They ran their first poll a couple years back for whether Panthor should come flocked – the vote was conducted during their fan panel at San Diego Comic-Con, based on audience reaction. People are still debating that vote (but I think they got it right). Last year’s SDCC fan panel had a vote for the paint deco for Swift Wind. That one was based on tickets placed in boxes – but each person got two tickets, one for each deco offered – and a lot of people I saw voted for both.

Online voting makes the most sense – it opens it up to the broader collecting community, not just those who can make it to events like Toy Fair and SDCC, and it means the results can be revealed sooner. I hope they run the next one like this too. 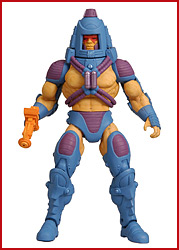 Recently, we ran a poll on the color of the upcoming Man-E-Faces® figure. What had happened was that The Four Horsemen wanted to do Man-E-Faces® with his mini-comic colors (flesh tone), Toy Guru wanted to do a full orange suit version, and a half-and-half version was shown at New York Toy Fair. Still, an agreement couldn’t be reached amongst the team so we figured we’d let the fans decide. And what did you choose?

So with 1,242 votes total, over 40% of you said that Man-E-Faces® should be produced in a half-and-half deco. Looks like the Four Horsemen and Toy Guru will just have to wait to see if their preferred versions are ever offered 😉

If you missed the poll, here’s the back story:

“Man-E-Faces® figure has a bit of a deco dilemma. The original cross-sell image of the toy on the back of the package showed Man-E-Faces® with flesh-toned skin with blue armor. But the original toy didn’t match this and shipped with orange skin, which most fans have interpreted over the years as an orange skintight suit (much like Man-At-Arms® wears a green skintight suit).

We checked with some of the original Mattel designers and indeed the orange color on the vintage figure was intended to be flesh-toned, but back in the day, our partners in China had a hard time matching the tone and he came out orange!

Most fans have memories of him having an orange suit (or orange skin), especially when you consider his human face was flesh-toned! And even more so, later figures of Man-E-Faces® (such as the 2002 figure) were done with purposeful orange skin/suit, so there is a lot of precedent for this color as well.”

You can look for Man-E-Faces® in his half-and-half deco to arrive August 15th, so be sure to watch this spot for official images and any updates as it gets closer. A big “thank you” to everyone who voted in the poll and helped us to resolve this difficult dilemma!