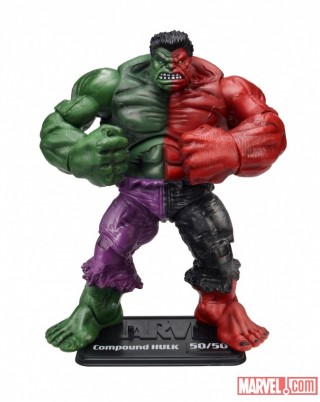 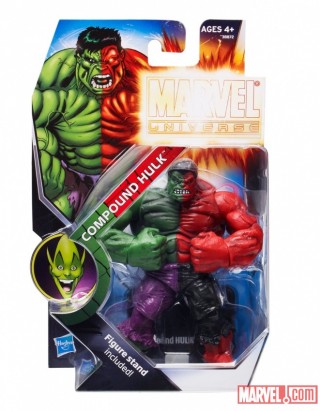 Hasbro is making its first appearance at New York Comic Con this year, and kudos to them for not rehashing the exclusives they offered at San Diego Comic-Con. Sure, we are hoping for the day that they melt down the molds for this Hulk, but it’s a decent repaint for a show exclusive, and the Impossible Man insert is cool. Transformers fans will be able to pick up a Nerf gun and Cuponk game exclusives.

We’ll be getting a preview tonight of what they’ll have on the floor, and I’m really looking forward to the Hasbro Marvel panel on Saturday night. Stay tuned for more!

What does HULK writer Jeff Parker think about seeing his and Ed’s creation turned into a toy? “This is not surprising at all considering how big Ed factored into that character–everything he thinks of makes a great toy,” Parker said. “It’s very cool, and they better send us each one and not make us share just because it’s two Hulks in one!”

Head over to Booth #302 at New York Comic Con, or HasbroToyShop.com, to get your own Compound Hulk! And stay glued to Marvel.com for more New York Comic Con 2011 updates as we get closer to fall’s biggest pop culture event!

The official word on Compund Hulk, from Hasbro:

What’s more powerful than Hulk and Red Hulk? The two Hulks combined into Compound Hulk! This 3 3/4″ Marvel Universe figure recreates a memorable moment from this year’s HULK #30, when the two hulking enemies were combined into one red-and-green behemoth! The figure is based on the artwork of superstar artist Ed McGuinness, and his artwork adorns the special edition blister card and outer packaging of this one-of-a-kind figure!

(Ages 4 and up; Approximate Retail Price $11.00; Available through HasbroToyShop.com and Booth #302 at New York Comic Con)