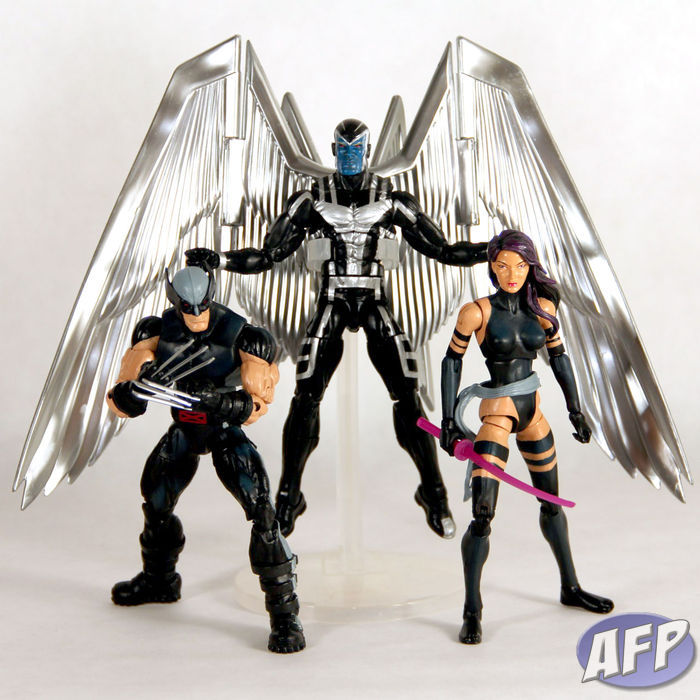 Sure, I am a Marvel Legends fan, and I love me some Uncanny X-Force – but make no mistake – if you don’t get this exclusive 3-pack, either from Hasbro’s booth at San Diego Comic-Con or from HasbroToyShop.com after the show, you will be sorry. 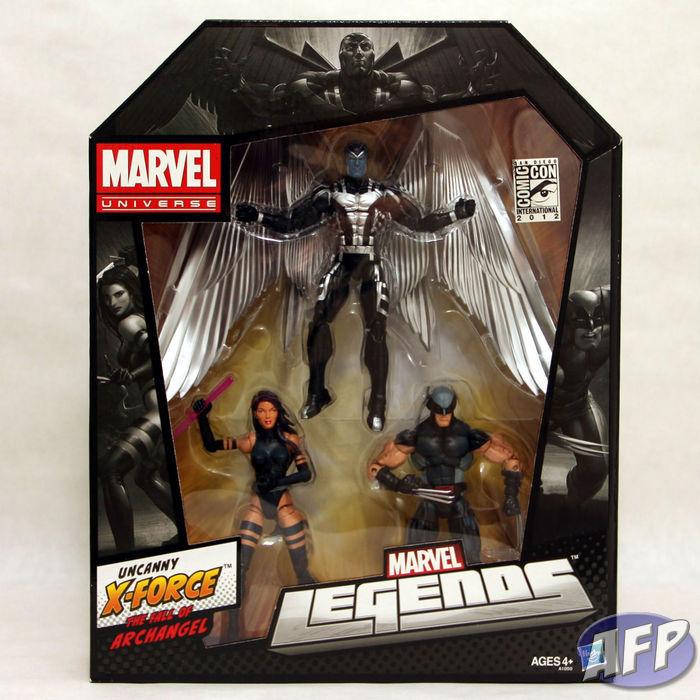 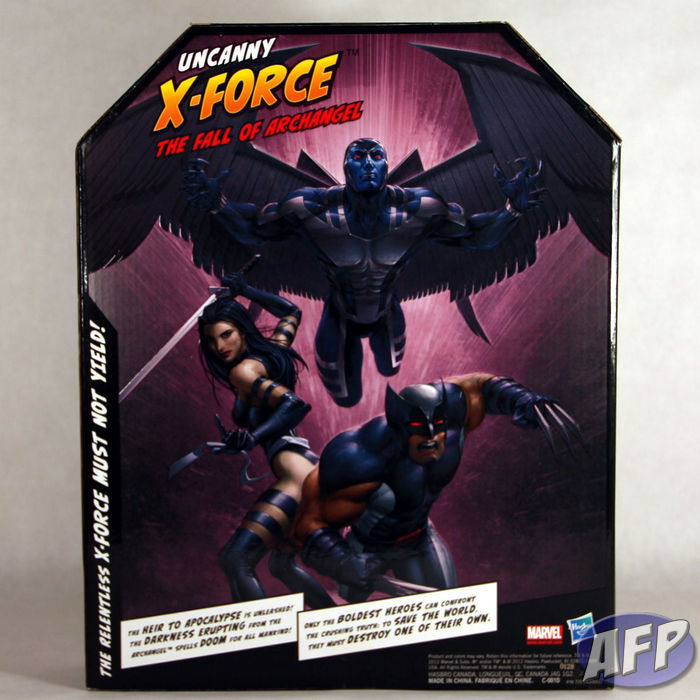 I won’t spend a lot of time talking about the packaging. It will fit in with your (Return of) Marvel Legends carded figures, if you aren’t an opener. It’s got a nice picture window that lets you see almost everything, with the exception of Wolverine’s boots. And if you do open it, you won’t find anything in there except the figures and Psylocke’s psychic sword. Archangel’s wings are in a sub tray behind the tray holding the three figures, and there’s not a clear rubber band in sight. The downside is that the tray holds them pretty snug, so it’s tough not to crunch the tray getting the guys out, if that’s the kind of thing that concerns you. 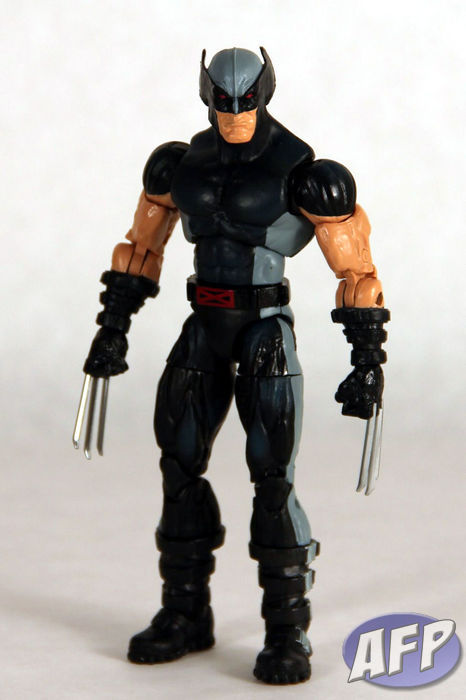 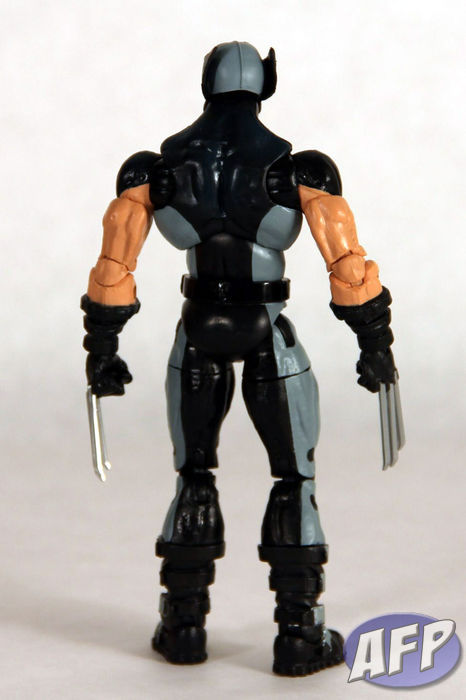 I know – you’ve probably got a ton of Wolverine’s already, right? The X-Force Wolverine is the best there is at what he does. And what he does is look badass in every single pose. With RoML, Hasbro’s returned to the tried and true articulation that we loved from the old Toy Biz days. Those things that you might have gotten used to not having in the years that ML was on hiatus are back – the neck hinge, the front and back shoulder swivels, double knees and elbows, wrist hinges. And Hasbro has made some improvements to the articulation scheme. The hips harken back to the ML 1 Captain America – say goodbye to those irritating 45 degree hinges – these are really functional. And the ankles – Hasbro’s borrowed the ankles from the final SOTA Street Fighter figures, which provide a greater range and more sturdy joint than a normal ankle rocker. 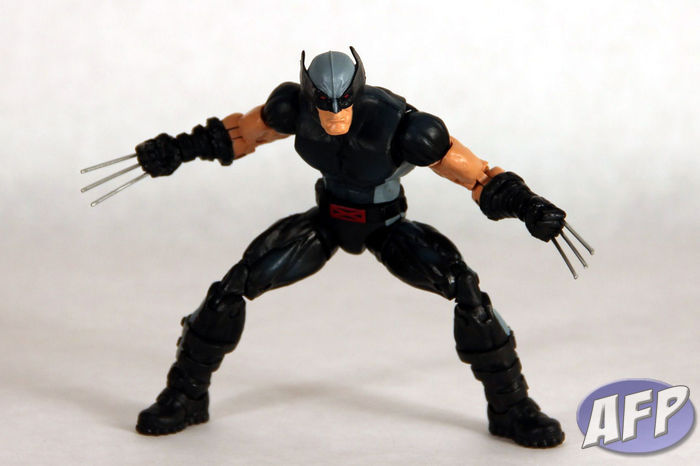 This allows Wolverine (and other figures in the RoML line that have these ankles) to get in some serious crouches. One of the things I love about the ankles is that they’re so easy to pose in action shots. I find that if they’re not flat on the surface, I just push down on the figure and they even themselves out.

Six other things that make this a serious contender for the best Wolverine figure ever – his claws – they are shiny and straight. They’re still plastic, so you don’t have to worry about puncture wounds, but they’re of a stiffer variety. They look to be inserted individually into his hands, so these are unlike any other claws you’ve had on your other Wolverine figures – unless you modded them yourselves. They look great, and I don’t think they’ll have a warping problem. 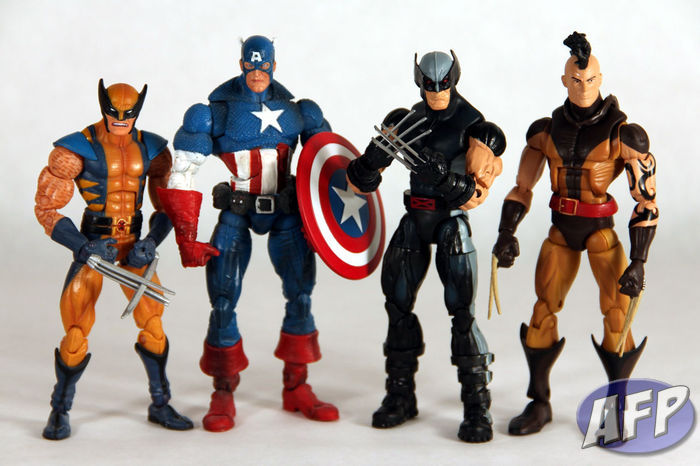 I do have two gripes with the figure. First, while he does clock in a little shorter than Daken, he’s still a bit tall for Wolverine. Second, and this is more of a nitpick, he could use a couple more paint apps – I think he could use some painted hair on his arms and a little lip color. My previous pick for best Wolverine ever was the Astonishing X-Men Wolvie – despite the odd swivel through the middle of his belt, had the right size and the extra paint. But when you factor in the hips, ankles, and claws on X-Force Wolvie, it’s close, but I have to give it to the new guy. 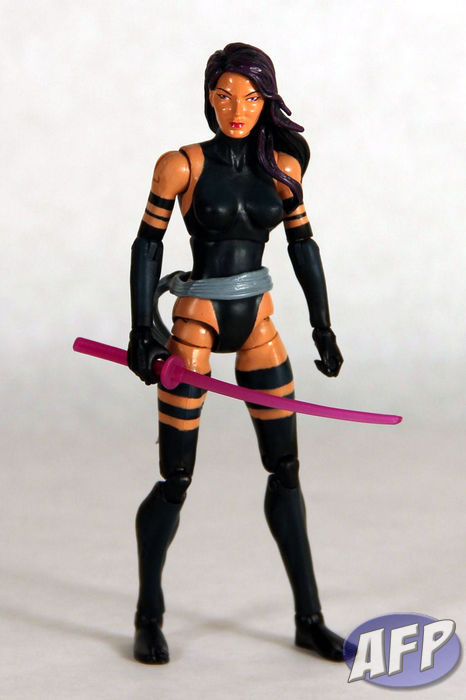 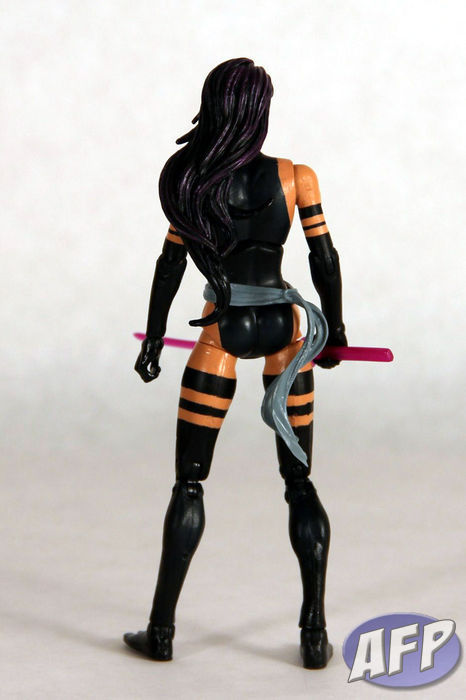 Psylocke is the weakest out of the three figures, primarily because she’s based off the Elektra from the Hasbro 2-packs from a few years back. That means she’s got those 45-degree hips that are a serious pain in the ass to get in the pose you want. Coupled with the lack of rocker ankles, have fun getting her to stand! 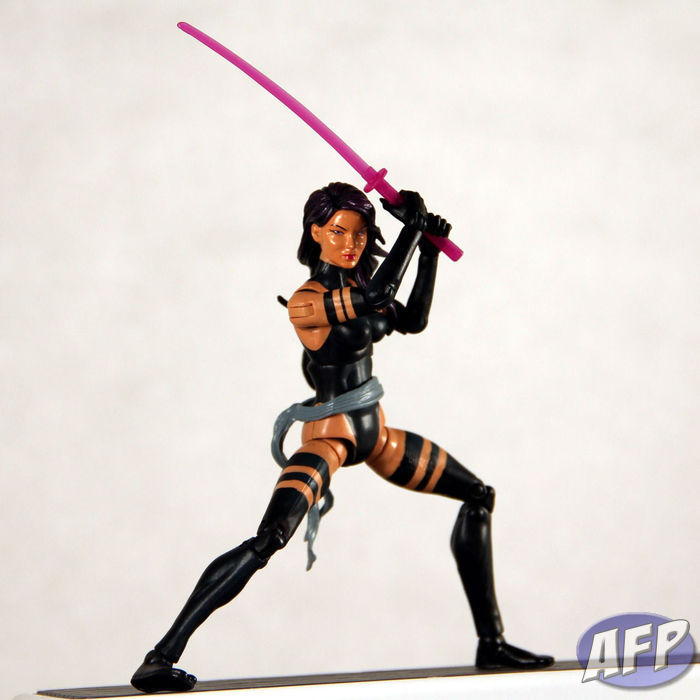 Despite the problems with the legs, I still like this Psylocke very much. The elbros (Hasbro’s swivel elbows) work just fine on the female figures, allowing some nice psychic sword-wielding poses.The head sculpt is nice, with the plus that it didn’t go through the pinching and warping machine that so many of the Hasbro females have endured. I got a very shiny head, and wonder if that will be the case for this run of figures, or if it’s isolated to a few of them. It’s a little less noticeable in person versus how prominent it is in the pictures, but if yours has shiny head you will notice it. That head sits on the same big ball joint that Elektra has, so the range of motion will be somewhat more limited – the hair sculpt, which is very nice, also impedes some poses. 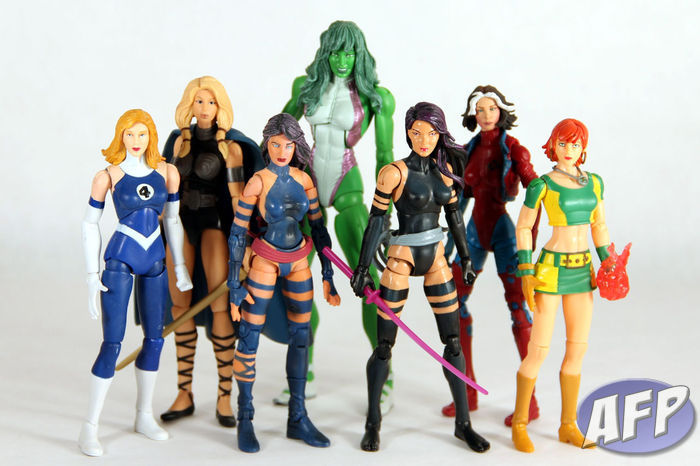 When you boil it down, though, the X-Force Psylocke comes out ahead of its earlier Toy Biz counterpart, in terms of size and head sculpt. If you wanted it as a stand-in for your regular X-Men team, a quick paint of the sash and you’re there.

With both Toy Biz and Hasbro, there’ve been a lot more misses with the women of Marvel than hits. Psylocke is a hit, but not quite as big a hit as the ones that are based on the SHIELD Agent / Black Widow bucks. 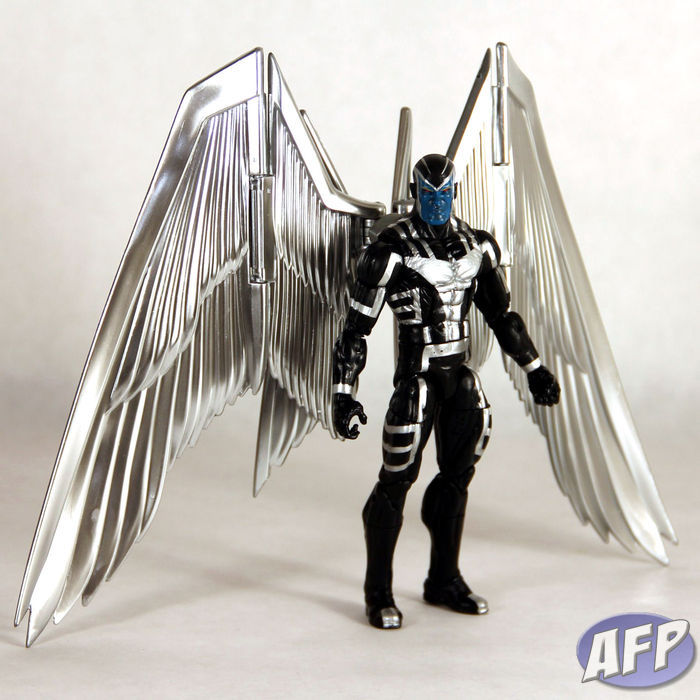 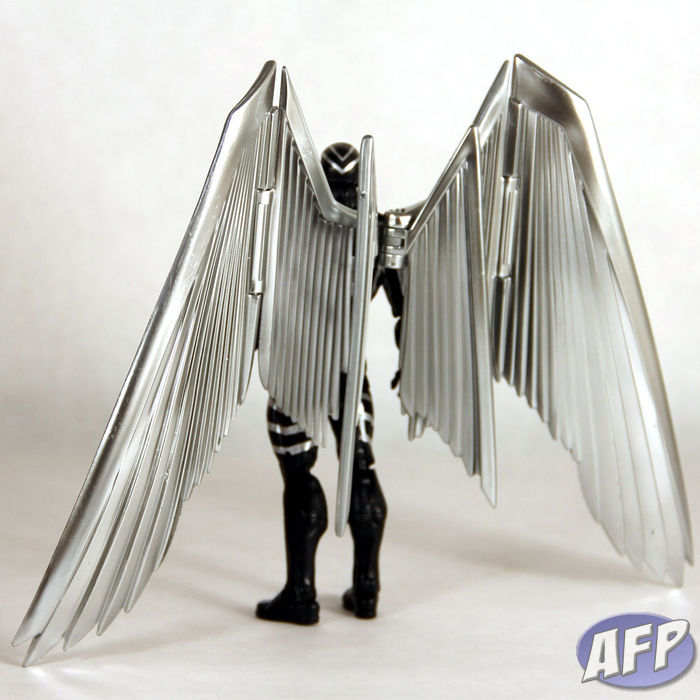 This set is called the Fall of Archangel, but the figure is truly a triumph. As it’s based on one of the new Hasbro RoML bucks, it’s got all the excellent articulation that I talked about with Wolverine, and on top of that you’ve got an awesome metallic paint job, a great head sculpt, and some really magnificent wings. The wings are removable – they plug into a slot in his back. And because the tips of the wings are there for support, you can stand Archangel in a vanilla pose, if that’s what you want. 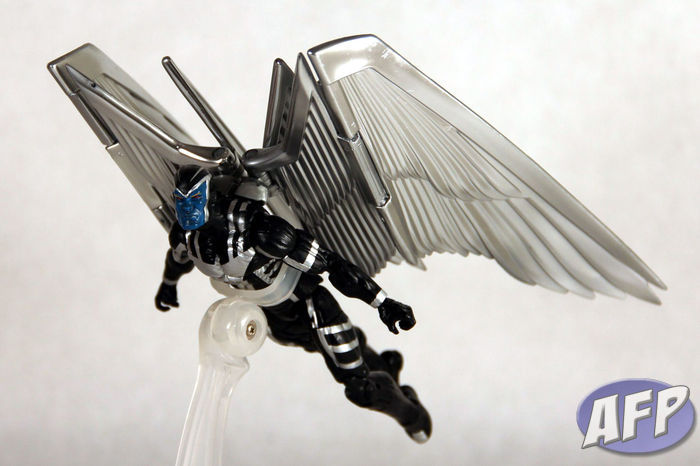 But forget standing – he just looks excellent in any flight pose you’ll put him in. He’s got a hinged neck so he can look ahead while in flight. There are six wing segments, all hinged, so you can get pretty creative with how the wings are posed. And they have a very nice metallic finish that really catch the light well. 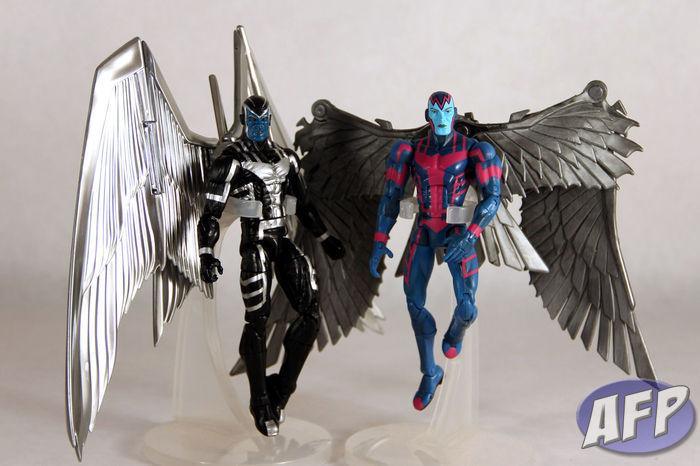 Toy Biz gave us a really great Archangel in the too-short-lived X-Men Classics line. I find the X-Force Archangel to top it by virtue of the awesome head sculpt, paint job, and wing design and finish. 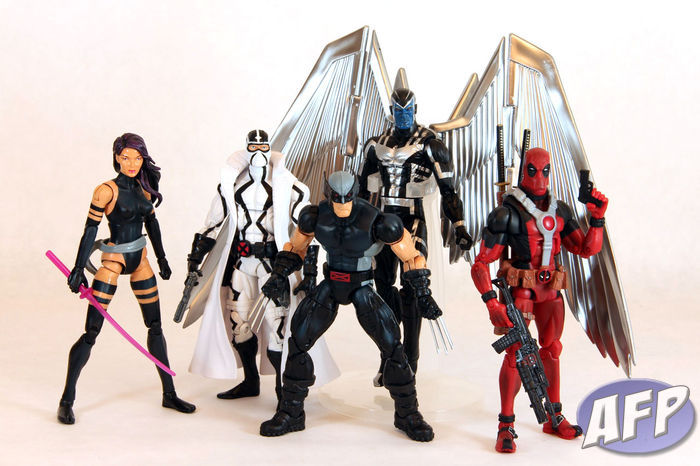 I’ve got to hand it to Hasbro – this exclusive is a total must have, and if I had to pick now, it’d be my pick for best exclusive for SDCC. Each figure in it is arguably the best rendition of that character to date. And when you consider that we got Fantomex in wave 2 and are getting the X-Force Deadpool in wave 3, with this 3-pack you’re well on your way to completing one of the best teams in one of the best comics that Marvel is publishing. 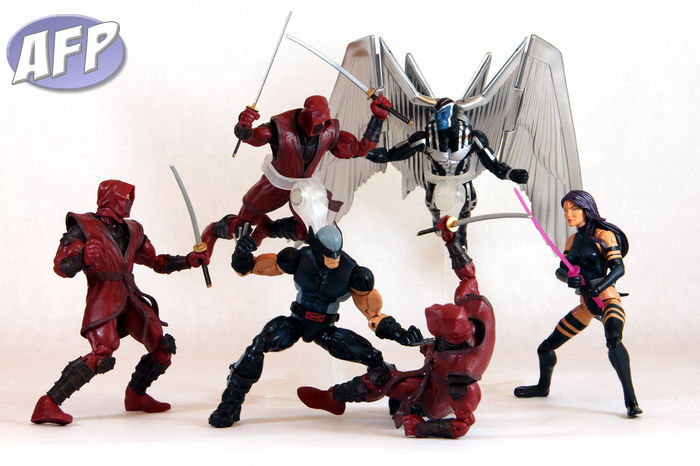 Our thanks to Hasbro for providing this set for review.