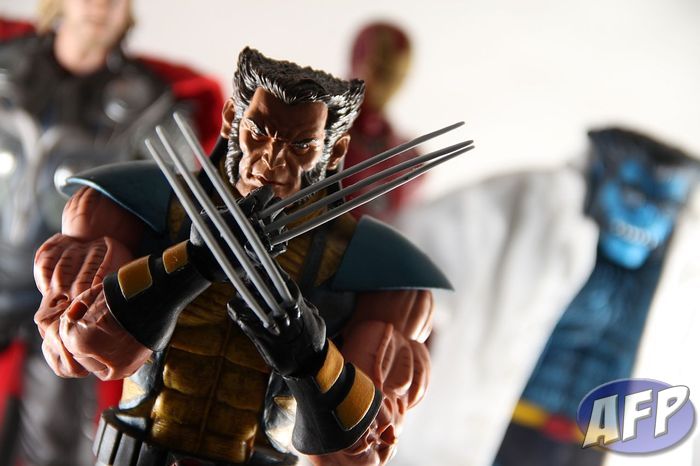 Most of the pictures I take of my action figure collection are for reviews. For those types of pictures, one of the primary goals is to capture the figure as clearly as possible. That often means a generic composition, bright and even lighting, and a vanilla background. But when I’m taking pictures for fun, like if I just find something cool and want to capture it, or if I’m shooting something for a Best Of article, all that (boring) stuff can go out the window.

Here’s the four simple things I try to remind myself so I can take more interesting pictures.

1) Loosen up the composition.

One easy way is to add some asymmetry to the shot by moving the main subject off center. As it’s not as important to capture the whole figure, you can go for close-ups of the subject – here, I was really interested in the Marvel Legends Icons Wolverine’s awesome head sculpt, and the idea to frame it with his claws came up organically as I snapped shots. I also shot at an angle for some added drama.

2) Use depth of field to make a more interesting (but not distracting) background.

This way, you can keep your main subect(s) in focus while the other elements in the background are blurred out – adding to the composition but not taking away from the focal point. Some cameras will have an aperture setting (represented by an F-number). The smaller that number, the more narrow the depth of field – in other words, fewer items in the shot will be in focus.

If you don’t have the ability to set the aperture on your camera, it may still have a macro mode (usually on the mode dial as a flower). With that setting (for taking pictures of small things really close up), most cameras will tend to have a narrow depth of field, achieving the same effect. No macro setting? You could try just getting close to your subject, while moving items in the background further away. 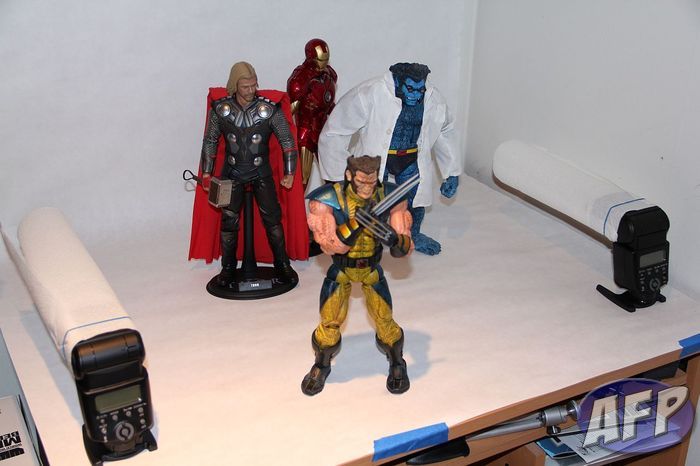 3) Play with your lighting setup.

For standard pics, I use three light sources – two from the side slightly in front of the figure(s) and the camera flash for fill. That provides nice even lighting for clear shots. For more interesting shots, you can try different things with your lights, like placement, color, and varying the relative strengths. For this setup, I placed the lights I normally have on the sides behind and below Wolvie but still in front of the background figures. Then I turned off my camera flash to do away with the fill lighting. This gave Wolverine a nice dramatic light on his sides, while keeping the background figures nice and bright, further de-emphasizing them.

On a side note, you can get great lighting without having to spend a ton of money. While I use a remote flash setup, I have been using ordinary paper towels as light diffusers to soften the light and spread it out – you can use paper towels on regular shop lights that you can get at a hardware store for a few bucks, for example, and get similar results. 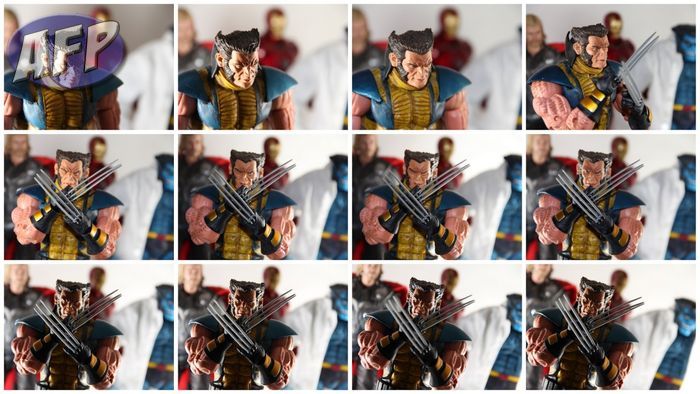 4) Take lots of pictures to experiment with different setups.

With digital cameras and rechargeable batteries, there’s practically no difference between taking one perfect shot and ten experimental shots. Even if I take a lot of time prepping for a shot, I hardly ever get it on the first snap of the shutter. So instead of a laborious set up, I’ll do some basic prep and then start shooting, making slight tweaks between shots. I do a lot of review on my camera’s LCD for quick feedback – I can zoom in and out to see if the stuff I want is really in focus, and even on a small screen I can tell if I like a shot’s composition.

For Wolverine, I took twelve pictures. It took five shots for me to get the composition I wanted, and then another four shots to figure out the lighting. The last shots were all to accommodate minor adjustments. I ended up liking the last shot the best, but oftentimes I’ll pick something in the middle.

So there you have it – my quick tips for more interesting action figure pics. Please let me know if this was a useful read – you can use the Leave a Reply section below (if you’re on the AFP website) or shoot me a message in Twitter or leave me a comment on our Facebook page. Thanks!