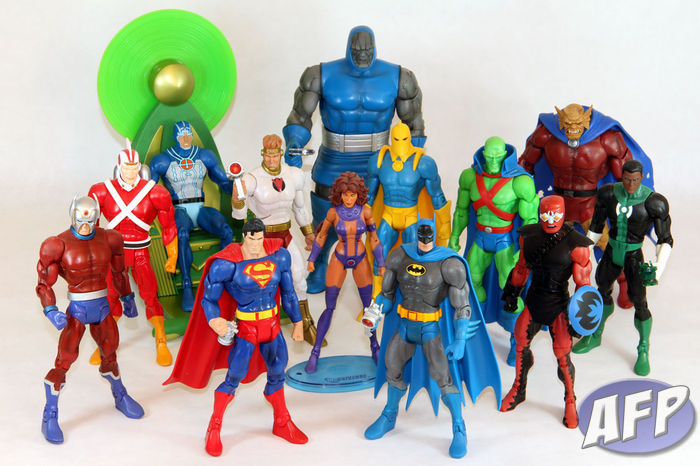 I’ve often joked that Mattel and the Four Horsemen created the DC Universe Classics line so they could make every character from the epic comic from Jim Starlin and Mike Mignola that is Cosmic Odyssey – but seeing all these figures together, spanning the entire life to-date of this toy line, you have to admit that I may be onto something. The very first wave of the line gave us Batman, Etrigan, and Orion. That’s THREE out of the five figures in the first wave, all from Cosmic Odyssey!

And in the very first year of the DC subscription, the club exclusive figure is Metron – the New God whose quest for knowledge about the Anti-Life equation serve as the catalyst for the events in Cosmic Odyssey. Admit it – you think I’m right! 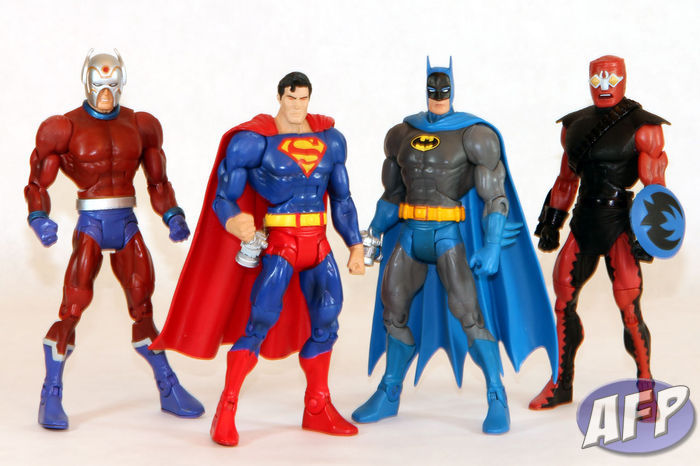 The comic has been so influential to the line that Orion got a second release, in a two-pack with Lightray (also a Cosmic Odyssey character), this time with a removable helmet. And while you would expect the ton of Superman and Batman figures, who would’ve expected Forager, one of the more obscure New Gods, to make it into wave 10, a Wal-Mart exclusive wave. Forager was released in his original colors, the good old red, white, and blue, but I customized Forager’s stealth suit that he wears while teamed up with Batman, as commissioned the creation of some Anti-Life aspect catchers. As I noted in my write-up for the Super Friends, I replaced the shrimpy Batman head with a new head sculpt from Ibentmyman-thing. 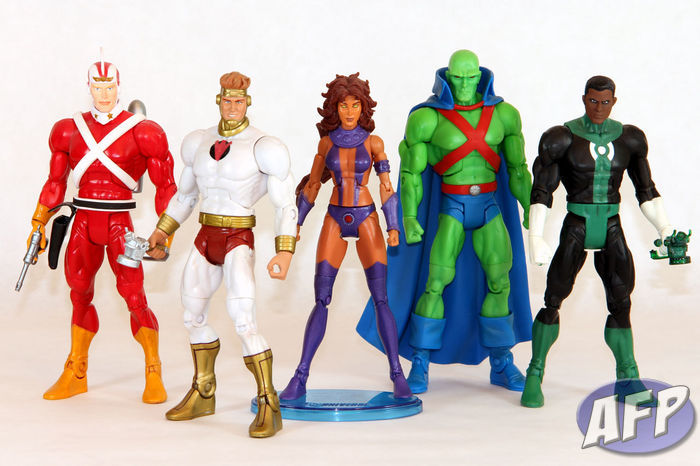 As mentioned above, the New God Lightray was released in a two-pack with Orion. Adam Strange and Starfire were released as the Space Heroes 2-pack exclusive to MattyCollector.com. In a rare misstep, Mattel produced Adam Strange in his modern costume, so I customized an Adam Strange in his classic costume. Starfire also had a little work done – I tried to carve out some cleavage by doing some filing on her torso – but what I wouldn’t give for a custom Starfire by Buzzy Fret.

Mattel released John Stewart in wave 11, but not wanting to repeat the Adam Strange costume gaffe, they re-released him in his Mosaic (also Cosmic Odyssey) costume in the Wal-Mart exclusive Green Lantern 5-pack. I still prefer the John Stewart custom that Robokillah made for me. And then I waited a long time for Martian Manhunter, who Mattel finally released in wave 15. 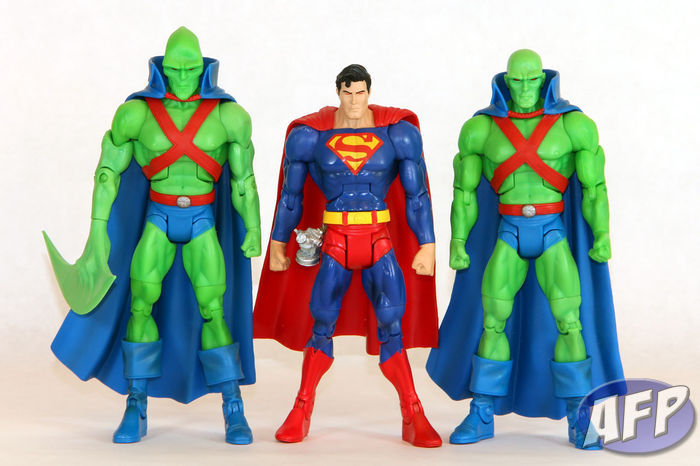 One thing that bothered me with the Martian Manhunter out of the package was his height. Sure, he’s supposed to be a few inches taller than Superman and Batman, but he absolutely towered over them. He’s almost as tall as the DC Direct version of MM that I used as a stand-in for a long time. I reduced his height slightly by first cutting his feet off right under the boot cuff. Then I drilled slots in the underside of the boot cuff shaped slightly like the boots. After testing for height, I inserted the boots into the slot I drilled and superglued it in there, creating a very sturdy bond.

The only complication was that MM is one of the few DCUC figures that has calf swivels – and the peg on his right leg for that swivel was pretty long, actually requiring a peg hole that extended beyond the bottom of the cuff. That was easily drilled off without impacting the swivel at all. 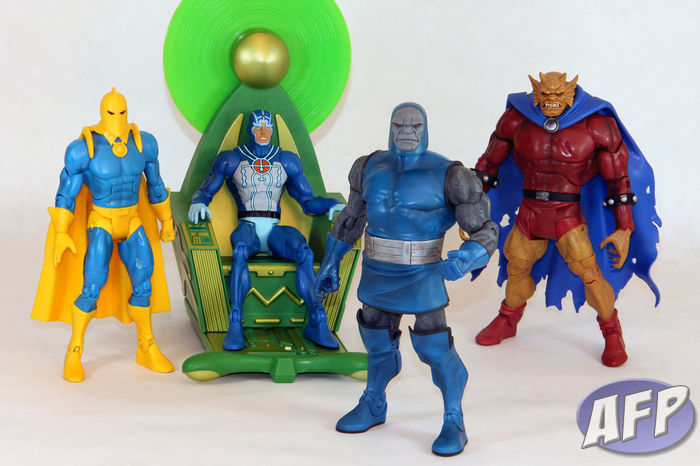 The Darkseid I use in my display predates DC Universe Classics, which shows Mattel was thinking about Cosmic Odyssey long before Classics even started. He was released in wave 4 of DC Superheroes, and my Darkseid features a commonly used head swap with the DC Direct New Gods Series 1 Darkseid

. Not wanting to leave a central Cosmic Odyssey character out of the Classics line, Mattel made Darkseid the Collect and Connect figure in wave 12. That figure is much larger, and it’s nice to have him as an option for larger group shots, like the one at the start of this article.

Dr. Fate, who Batman brought in to keep tabs on Darkseid, was released in wave 8. And as we discussed before, Etrigan was in the first wave of Classics, and Metron was the exclusive figure in the first year of the Club Infinite Earths subscription.

So there you have it – enough evidence that Cosmic Odyssey is the driving force behind DC Universe Classics that even Toy Guru and the Four Horsemen couldn’t debunk it. Still not convinced? What’s it going to take – Highfather in the subscription? Lonar? The big Parademon that Batman fights in the sewers? Come to think of it, that’d be a pretty good addition to the collection… 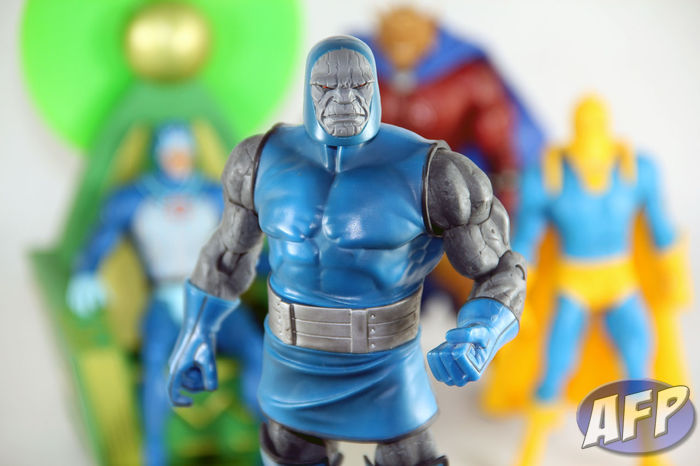