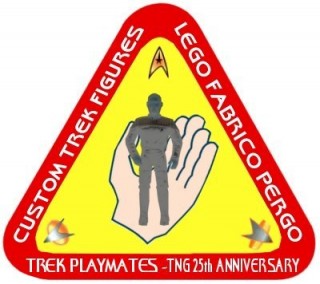 Playmates has once again secured special license permission from Hasbro, to complete a wave of six figures celebrating the 25th Anniversary of Star Trek The Next Generation. Tying in with the release of the HD remastered version of the series by CBS, certain characters have been selected following feedback from fans at previous CustomCons. Special moulds have been used to recreate the style of the original figures from the 1990s. The centre pieces are Commander Riker and Guinan, but Admiral Theremin continues “The Lost Prophet” novels connection echoing Voyager’s Lieutenant Commander Arko and Klingon officer Commander J’Pon of past releases. A real surprise though is Dr Leah Brahms which many fans had hoped for since she was first mentioned in the Final Vote announcement back in CustomCon 9, in late 2003.

The Adventure Continues…!  To celebrate 25 Years of Star Trek The Next Generation, Playmates in association with Hasbro have taken several characters from their figure archives and given them an anniversary update! A rare opportunity to revisit characters from the original 1992-97 range, as the award winning series goes to HD Blueray. This special anniversary wave sees brand new versions of Commander Riker and Guinan as seen in the show, two alien commanders, a new character from the spin off “The Lost Prophet” books, and even a Fan Vote Exclusive long thought abandoned! Celebrate with these limited edition exclusives from Star Trek The Next Generation!

AGT Admiral Riker head on Q Starfleet Uniform body. Hairline carved to shape the edge of the ears and forehead temples, then the head’s shape resculpted around the ears with Milliput. Sunken areas beneath eyes also filled in. Outermost rank pip removed.

HD reason = The inspiration for this wave of figures, I finally had enough of the ripped uniform and “I really have to pee!” pose of the original figure. The AGT Riker head once carefully altered is a much better likeness to Mr Frakes as the character.

Standard TNG Guinan head and arms on a Generations Guinan body and legs. The hat was pruned and filed to an oval shape with slightly pointed rear tip. The sleeves were trimmed to a narrower style than the original red outfit release. Translucent blue paint used on the main body of the costume to create an alien fabric effect. The blue colour scheme, contrasting the original red release is taken from the costume styles seen “Yesterdays Enterprise” and “Family.”

HD Reason. = I did this as Playmates did season 1 & 2 and later season 6 & 7 versions of several characters, such as Picard, Data, LaForge, Troi and Worf. Why not Guinan, especially considering her spectrum of different outfits as a civilian?

HD reason = I had intended to include Dr Brahms back in CustomCon 14 alongside Nurse Ogawa, but could not source parts at the time. This figure now finally completes the “Final Vote” characters seen in the series.

Rom from DS9 head and arms on Quark from DS9 Torso and legs. Torso tunic resculpted with Milliput, adding Daimon rank “commas” and collar, as well as sleeve rank bands. The collar weight is cut plastic that was superglued to a washer taken from a spare figure torso.

HD Reason = The Daimon wears the uniform introduced in Season 2’s “Peak Performance” which was then used for the merchant service / military Ferengi for the rest of TNG.

Garak from DS9 head on Gul Dukat body. The portion of neck on the head was reduced slightly and the torso neck pieces were partially built up with Milliput, as were the cheeks and mouth areas. All designed to weaken the likeness to Garak. Skin tones are a reversal of the original Gul Dukat, to create a sinister staring effect.

HD Reason = I feel the figure now looks more like the Cardassian officers seen in episodes like “Ensign Ro,” “Chain Of Command I and II,” and “Parallels.”

ST VI General Chang head on the AGT Riker Body, from making Commander Riker. Andorian antenna made from the Chang figure’s middle and index fingers cut with a craft knife then fixed with superglue! Thin pony tail trimmed off, the hair is sculpted Milliput as are the vice admiral rank pips. AGT com badge sliced off replaced with a TNG era one.

HD Reason = I was never satisfied with the look of the Andorians in the Enterprise series, but the idea of a TNG era Andorian who was part Klingon hit me when a friend gave me the loose Chang figure. The bald Andorian Admiral seen in Trek IV was an influence too. The character is named after Leon Theremin inventor of the electronic musical instrument used on films like “The Day The Earth Stood Still.” (1951).