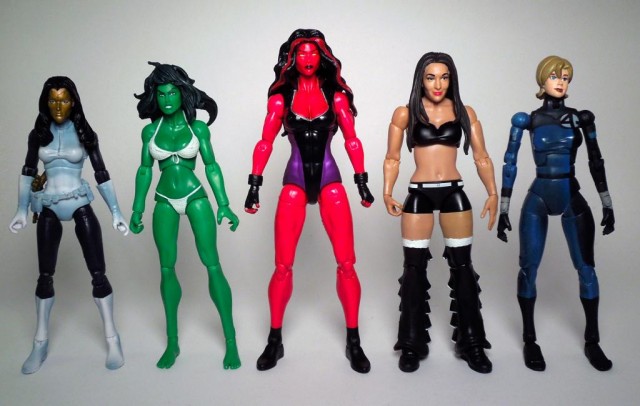 Assuming Hasbro has prevented the Apocalypse and the world doesn’t end tomorrow, they will be releasing the first wave of its (Return of) Marvel Legends for 2013 sometime during the first quarter. It may be sooner than we expect, because both loose and packaged figures from the Marvel Legends Hit-Monkey Build-A-Figure wave, including Wolverine, Archangel, Captain America, Protector, Hyperion, and Red She-Hulk are hitting eBay.

Fwoosher Boxghost has a Red She-Hulk in hand and has kindly shared his pictures and thoughts with us.

I’m trying to like this new sculpt but there’s just problems with it that I can’t excuse Hasbro for, especially since this is a brand new sculpt and they should have learned from the previous female bodies. The biggest issue I have is the hip setup. She’s got the Y hip set up like the Shield/Widow/Mystique body has. Why in the world can’t she have the T hips like the Bucky cap body or any of the other new sculpts that Hasbro is doing?

I’ve also got an problem with how little range of motion she gets in her elbows — Less that the Shield body that is being used for everything now. Like SolidSnake said in his video review, she would be a lot better with double elbows like the MU She Hulk has. Also, she’s pretty hard to get to stand because the top half of her body is so much heavier than the lower half. Her rocker ankles aren’t loose exactly, but they still don’t support the weight of the rest of the figure.

I do like the torso joint though. It’s got much better side to side movement that the Shield body was so desperately needing.

I think there’s quite a bit to like about the figure and am looking forward to getting her. The sculpt turned out very nice looking, and I’m glad that her head didn’t get squished in production. I do find the head size just a little smaller than I’d like on that size frame, but on the plus side, it may be a great looking head for some swaps on the other body sizes.