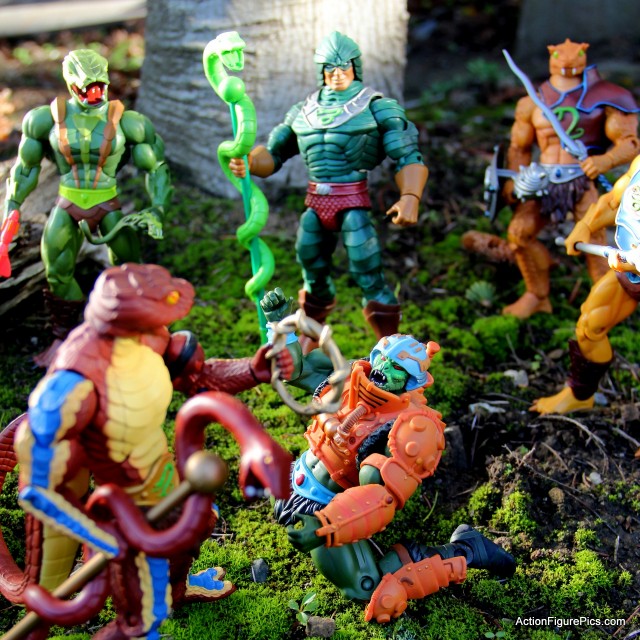 My “staging area” (AKA the unruly pile of unopened toys that my wife wants to burn) was getting too unruly for even me being able to stand it, so I did some opening of a few Masters of the Universe Classics figures that were stranded due to lack of shelf space allocated to MOTUC. The pile included Kobra Khan, Rattlor, and the Snake Men 2-pack, and I was a little surprised to find that I could have an entire cube in my display devoted to the faction – it didn’t seem too long ago that I only had King Hiss, and he had been stranded with Hordak and the Evil Horde. 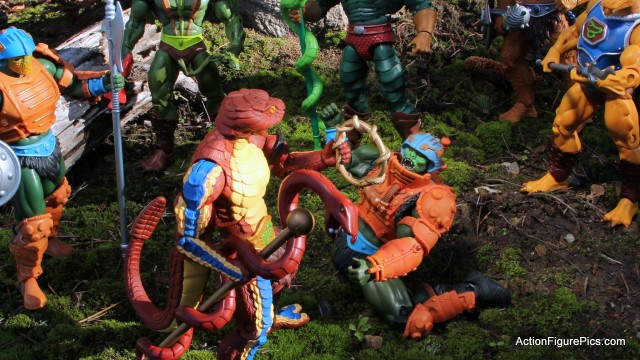 When I got Snake Man-At-Arms I was struck by the turn of events in his bio – one of He-Man’s closest friends suffers a heel turn, and it’s permanent?! It gave me a new appreciation for the mythos that’s getting extended through Classics. When I was a kid, it was comforting for the cartoon to return to status quo at the end of every half hour. Now that I’m a big kid, I’ll admit I still long for that innocence, but getting a glimpse of a story where the characters evolve, grow, or go bad has added to the enjoyment of collecting these toys. 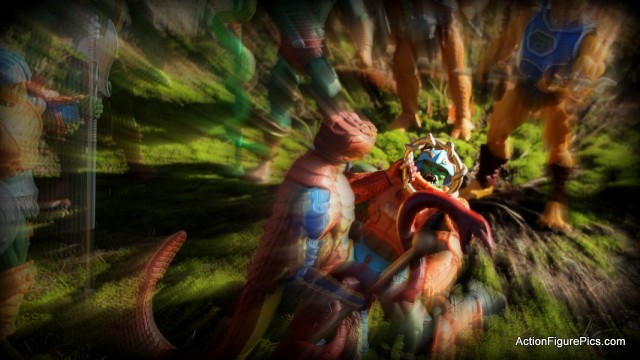 So I took these guys outside and wanted to capture the moment that Duncan gets turned. I used my cheap DIY reflector to get light where I needed it. And for the shot above, I just used the “focal zoom” filter in Picasa. The action is all in that Serpent’s Ring. Realized after taking the pics that I had swapped Duncan and Snake MAA’s bodies, and in these shots it’s the original Man-At-Arms. I also regret not starting off with some shots using Duncan’s head. Dur!

After snapping these pics, I decided to bag up some figures in one of my cubes to make room for the Snake Men faction. My wife found the empty cube and thought I had cleared the space for her. I thought I was scoring points by clearing out some of the staging area, but now I’m back in the dog house again! Damn you King Hiss!