I think I’ve lost any geek cred I ever had. I had no idea that April 28th was Masters of the Universe Day, and that tomorrow, May 4th, is Star Wars Day! And we have another politician to thank – the May 4 Star Wars Day is attributable to the U.K.’s recently departed Margaret Thatcher. True story. 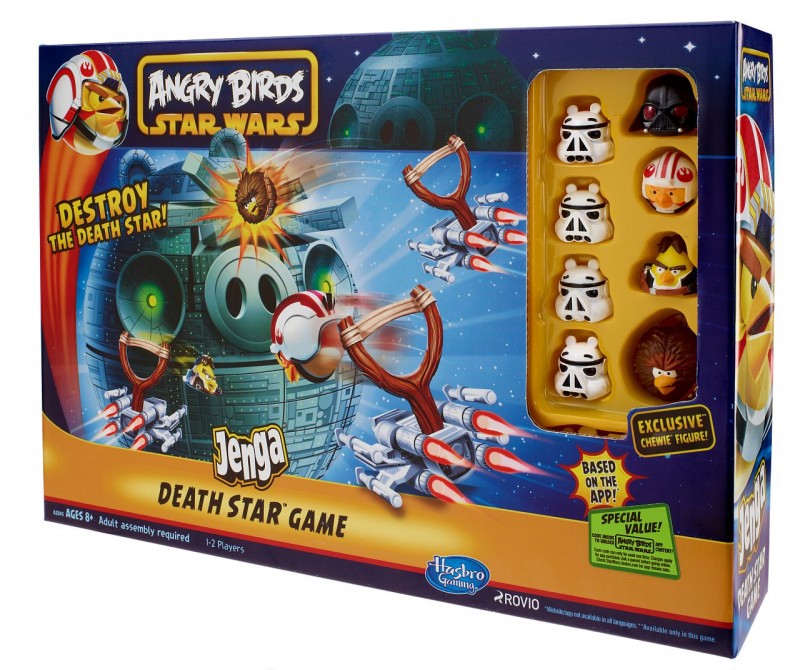 But Hasbro hasn’t forgotten, and has even put together a special promotion for us Star Wars fans. Use code “SWFANDAY” on any Star Wars HasbroToyShop purchases on Star Wars Day and you’ll get a 20% discount. The discount even covers the wildly popular Angry Birds Star Wars products, including the Angry Birds Star Wars Jenga Death Star Game, which is not only a massive jumble of brand names, but also includes an inexplicable and must-have Chewbacca “Furball” Angry Bird exclusive figure.

PAWTUCKET, R.I. (May 1, 2013) — How do you make the greatest pop-culture holiday in the universe even better? Put some birds in it! For the first time since their debut last fall, ANGRY BIRDS™ STAR WARS® toys and games from Hasbro, Inc. (NASDAQ: HAS) are available for all your May the 4th celebratory needs! Released in agreement with LucasFilm and based on the wildly successful mobile game from Rovio Entertainment, ANGRY BIRDSTM STAR WARS® toys and games are the perfect way for kids and parents to spread their wings and celebrate STAR WARS Day in a whole new way!

Stack, launch, and destroy with the AT-AT ATTACK BATTLE GAME, which includes 21 blocks to create the signature AT-AT, a LIGHTSABER LAUNCHER and 12 ANGRY BIRDS STAR WARS figures — including two that are exclusive to this set! Players can also unlock ANGRY BIRDS STAR WARS in-app content with a special code in each pack.

Get ready to unleash the birds to destroy the DEATH STAR in the ANGRY BIRDS STAR WARS JENGA DEATH STAR game! Take turns trying to topple the Empire in an intergalactic battle. Pull back the X-Wing Fighter to launch an epic squawk attack with LUKE SKYWALKER, HAN SOLO or CHEWBACCA birds. Knock the pigs’ block off and explode the DEATH STAR. Players can also unlock ANGRY BIRDS STAR WARS content in-app with a special code in each pack.

Stack, launch and destroy with these packs, each featuring three characters (one exclusive to each set), a LIGHTSABER LAUNCHER, and signature pieces to create an IMPERIAL PIG structure for your ANGRY BIRDS to knock down. Choose from DARTH VADER’S LIGHTSABER, JABBA’S PALACE, THE EMPEROR’S THRONE, and FIGHT ON TATOOINE. Players can also unlock ANGRY BIRDS STAR WARS in-app content with a special code in each pack. Each sold separately.

Pull back and blast into battle! Each ANGRY BIRDS STAR WARS POWER BATTLER comes with a target to knock down. Available in LUKE SKYWALKER, BOBA FETT, DARTH VADER and HAN SOLO. Each sold separately.

Kids can add to the Launcher and Slingshot fun with Faceball Refill 3-packs.  Create an IMPERIAL PIG ARMY with the GALACTIC EMPIRE pack, join the REBEL BIRD ALLIANCE with the MILLENNIUM FALCON pack, and take on the PIG EMPIRE with the TATOOINE HEROES pack.  Collect them all! Each pack sold separately.

Hasbro, Inc. (NASDAQ: HAS) is a branded play company dedicated to fulfilling the fundamental need for play for children and families through the creative expression of the Company’s world class brand portfolio, including TRANSFORMERS, MONOPOLY, PLAY-DOH, MY LITTLE PONY, MAGIC: THE GATHERING, NERF and LITTLEST PET SHOP.  From toys and games, to television programming, motion pictures, digital gaming and a comprehensive licensing program, Hasbro strives to delight its global customers with innovative play and entertainment experiences, in a variety of forms and formats, anytime and anywhere. The Company’s Hasbro Studios develops and produces television programming for more than 170 markets around the world, and for the U.S. on Hub Network, part of a multi-platform joint venture between Hasbro and Discovery Communications (NASDAQ: DISCA, DISCB, DISCK). Through the company’s deep commitment to corporate social responsibility, including philanthropy, Hasbro is helping to build a safe and sustainable world for future generations and to positively impact the lives of millions of children and families every year. It has been recognized for its efforts by being named one of the “World’s Most Ethical Companies” and is ranked as one of Corporate Responsibility Magazine’s “100 Best Corporate Citizens.” Learn more at www.hasbro.com.

About LucasFilm:
Lucasfilm Ltd. is one of the world’s leading film and entertainment companies. Founded by George Lucas in 1971, it is a privately held, fully-integrated entertainment company. In addition to its motion-picture and television production operations, the company’s global activities include Industrial Light & Magic and Skywalker Sound, serving the digital needs of the entertainment industry for visual-effects and audio post-production; LucasArts, a leading developer and publisher of interactive entertainment software worldwide; Lucas Licensing, which manages the global merchandising activities for Lucasfilm’s entertainment properties; Lucasfilm Animation, which is currently producing content for film and television, including Star Wars: The Clone Wars, a CG-animated half-hour television series; and Lucas Online creates Internet-based content for Lucasfilm’s entertainment properties and businesses. Additionally, Lucasfilm Singapore, produces digital animated content for film and television, as well as visual effects for feature films and multi-platform games. Lucasfilm’s motion-picture productions include three of the 20 biggest box-office hits of all time and have received 19 Oscars and more than 60 Academy Award nominations. Lucasfilm’s television projects have won 12 Emmy Awards. Lucasfilm Ltd. is headquartered in San Francisco, Calif.
About Rovio Entertainment:

Rovio is an industry-changing entertainment media company headquartered in Finland, and the creator of the globally successful Angry Birds franchise. Angry Birds, a casual puzzle game, became an international phenomenon within a few months of its release, and is now the number one paid app of all time. Following this success in mobile gaming, Angry Birds has expanded rapidly in entertainment, publishing, and licensing to become a beloved international brand. www.rovio.com