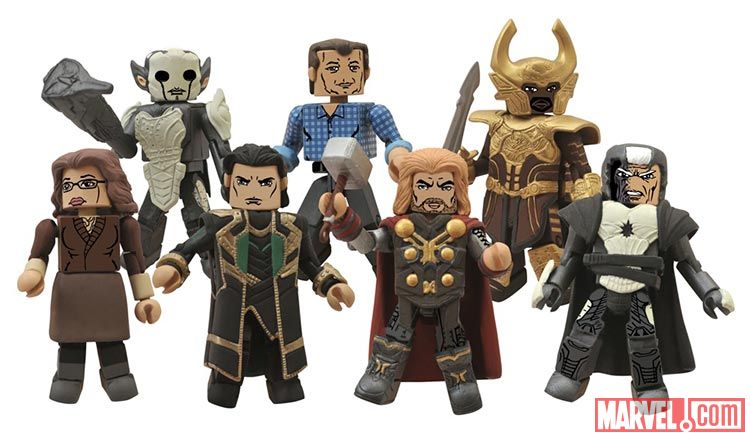 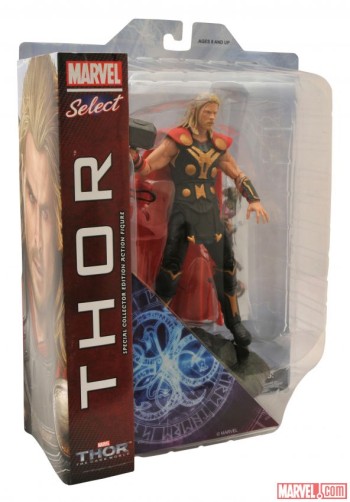 We’re a little over a month away from Thor: the Dark World, and if you’re jonesing for toys, then Diamond Select Toys has got you covered – they’ve got Thor Minimates and Marvel Select figures on the way.

Minimates allows them to go pretty wide – not just the main guys in Thor, Malekith, and Loki, but they’ve got a Dark Elf army builder, Eric Selvig, and and Darcy Lewis represented. Kat Dennings fans rejoice! I’m surprised at Darcy but no Jane Foster – I’m guessing she’ll show up at big box retail, as this series is headed to comic book and specialty retailers.

Jane will definitely make an appearance with Thor in the Marvel Select line. The figures will be sold separately but will each have bases that connect to form a diorama for the figures. Are we supposed to call that BAD (build-a-diorama)?

Thor: The Dark World Diamond Select Toys
Get mighty with these new toys based on the upcoming film!

In November, an entire series of two-inch Marvel Minimates will be dedicated to Thor: The Dark World! The 53rd Marvel assortment at comic shops and specialty stores will include four different two-packs: Thor with Malekith, Loki with Heimdall, Dr. Erik Selvig with Dark Elf and Darcy Lewis with Dark Elf. Designed by the team at Art Asylum, each Minimate stands two inches tall and includes a variety of interchangeable parts and accessories, including an alternate head for Malekith, hands for the Dark Elves, a helmet for Loki and bare legs for Selvig.

Marvel Select Thor figure from Diamond Select Toys For those who like their toys a little bigger, Thor and Jane Foster will each get a seven-inch-scale figure in the Marvel Select action figure line! Designed by Gentle Giant Studios, each figure will have 16 points of articulation, and each will come packaged with half of a detailed diorama based on a scene from the film. Connect them together to re-create the movie at home! Look for them to hit comic shops and specialty stores starting in November!