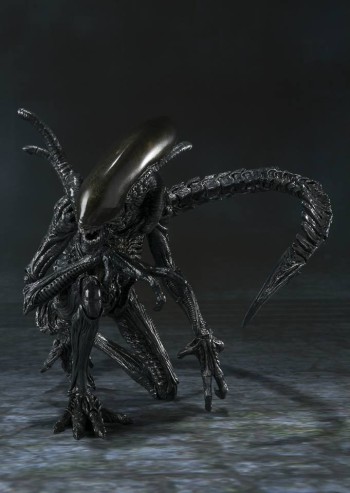 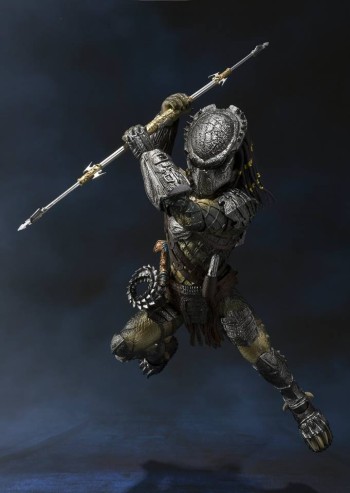 A week ago we got a more in depth look at the first figures from Bandai’s S.H. MonsterArts Aliens vs. Predators license – the Alien Warrior and the Predator Wolf. Now, courtesy of Bluefin, we’ve got high-res versions of the pics, plus the timing and cost for the U.S. releases.

The Alien Warrior is arriving first, next February, for $56.99. The Predator Wolf follows in March, for $58.99. I know that’s not cheap, but with the detail, articulation, and accessories, I think these could be a great value for this class of figure. What do you guys think?

A brand new series has debuted in the S.H.MonsterArts line! From 2004’s Alien vs. Predator, the sleek reworking of the original Alien design has been accurately replicated in figure form, right down to the translucent head structure and bony armor plating. Thorough research has allowed for superb detail in the sculpt, bringing out all the fine details almost impossible to see on-screen. The segmented tail is the main attraction of this figure, with each section a separate poseable piece. Adding to its ferocity, the tip of the already dynamic tail has then been sharply molded in diecast: lethal! Accessories include a finely detailed egg chamber and the famous juvenile form of the Warrior, the chestburster. The S.H.MonsterArts Alien Warrior represents a new pinnacle of excellence for Alien action figures. Pose all together with the upcoming S.H.MonsterArts Predator Wolf to experience all the non-stop action first hand.

The second figure in the Alien vs. Predator series has been revealed! The Predator Wolf from the 2007 sequel film, “Alien vs. Predator: Requiem” joins the S.H.MonsterArts line in absolutely stunning detail. A portion of the armor has been recreated in diecast metal, while the weaponry is molded in finely detailed ABS plastic. PVC has been used to capture the correct look of the body, while the famed “dreadlocks” utilize soft PVC so as not to interfere with the posing. Interchangeable head parts allow for portrayal of predator with masked removed, revealing its grotesque organic face beneath. Interchangeable mandibles allow it to either be displayed in normal or howling modes. As an added gimmick, the classic Predator weapon, the wrist blade, can be displayed either exposed or retracted. This is the ultimate action figure portrayal of the ultimate Predator warrior. Pose him alongside the S.H.MonsterArts Alien Warrior to get the maximum AVP experience.