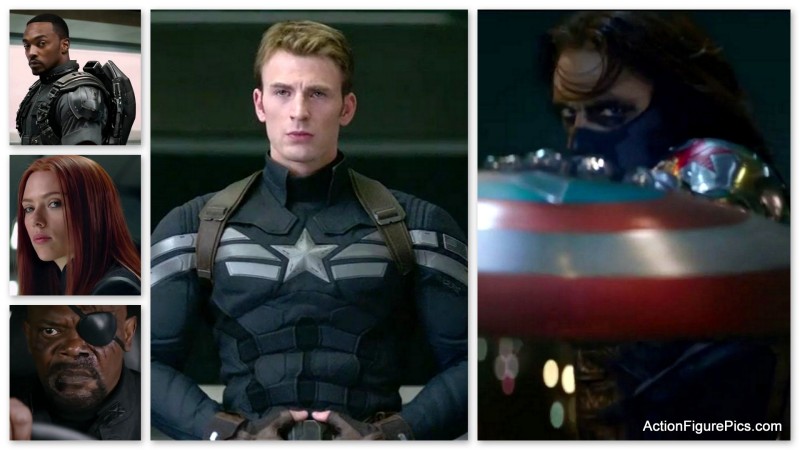 Thor: the Dark World may be opening in two weeks, but Cap is generating his own hype with the official trailer for Captain America: the Winter Soldier. Looks awesome! I still think that while Chris Evans is great in the role of Cap, he still looks super goofy in the helmet they designed for the movie – and I think Marvel Studios knows it too, which is why it gets so little airtime in the trailer. The Steve Rogers Super Soldier costume from the comics looks great, though I don’t hold out much hope for a better looking helmet if that becomes his Cap costume in the movie (the action figure hints that the helmet will be just like the old one).

All the supporting characters look great – ScarJo looks good as Black Widow with the super straight hair we saw first in action figure form. Thankfully,  Anthony Mackie as the Falcon looks like a badass, and not goofy considering how his costume from the comics might have turned out in live action. And Samuel L. Jackson – looks like rough times for the eye patch are coming.

After the cataclysmic events in New York with The Avengers, Marvel’s “Captain America: The Winter Soldier” finds Steve Rogers, aka Captain America, living quietly in Washington, D.C. and trying to adjust to the modern world. But when a S.H.I.E.L.D. colleague comes under attack, Steve becomes embroiled in a web of intrigue that threatens to put the world at risk. Joining forces with the Black Widow, Captain America struggles to expose the ever-widening conspiracy while fighting off professional assassins sent to silence him at every turn. When the full scope of the villainous plot is revealed, Captain America and the Black Widow enlist the help of a new ally, the Falcon. However, they soon find themselves up against an unexpected and formidable enemy—the Winter Soldier.