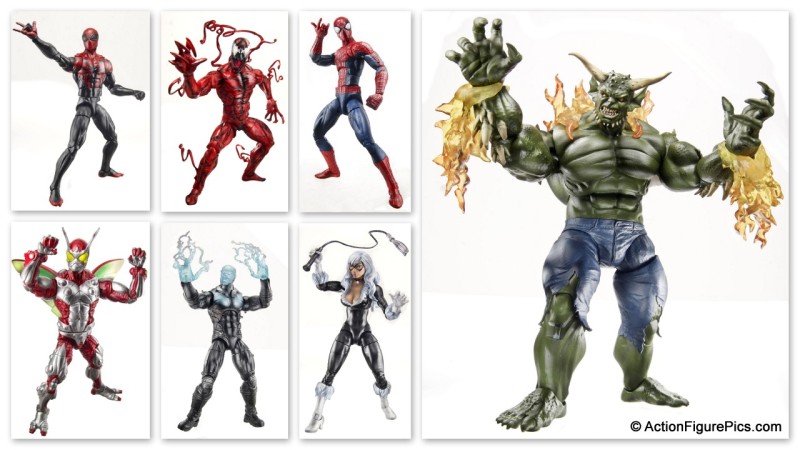 At the “Night Before” party, Hasbro also pulled out the stops for the merchandise for The Amazing Spider-Man 2, which opens in May. If conventional wisdom holds, that means a street date for the toys in the February time-frame.

Like the Captain America figures, Marvel Spider-Man Legends Infinite Series (still a tongue-twister) will feature a build-a-figure – the Ultimate Green Goblin – also split over two waves. Following the pattern, Hasbro also plans swap-outs for figures – Carnage, Black Cat, and Beetle are the swaps in the first wave, for the 2 Spideys and Electro. Hopefully this works better for the movie-themed waves than they did for the latter ML waves from this year.

SPIDER-MAN is swinging back into theaters on May 2, 2014, in THE AMAZING SPIDER-MAN 2. The web-slinging super hero will square off against a powerful new villain, ELECTRO.

Hasbro captures the sequel’s excitement with its 2014 toy line with the new SPIDER-STRIKE technology, which lets the action figures activate special features on accessories and vehicles.

In 2014, fans can recreate the excitement of THE AMAZING SPIDER-MAN 2 film with 3.75-inch action figure versions of many of the characters in the film. Each figure features great articulation and deco, as well as an accessory that changes shape when it makes contact with the SPIDER STRIKE figures. Figures from Wave 1 of this line revealed at NEW YORK COMIC CON are as follows: AXE GAUNTLET SPIDER-MAN, SKY STRIKE GLIDER SPIDER-MAN, SPIDER STRIKE BACKPACK SPIDER-MAN, and LIGHT UP ELECTRO. Ten figures to collect. Each figure sold separately.

Standing at 10-inches tall, the TRIPLE ATTACK SPIDER-MAN Electronic Figure is ready for any battle! Figure includes two different gauntlets that activate lights and unique phrases. Remove all SPIDEY’S accessories to hear his wise-cracking phrases. Add the web whip to hear crime-fighting phrases. And, add the web spear and SPIDEY is ready to take on ELECTRO with movie-themed phrases! Requires one “AA” battery. Demo battery included.

Marvel Entertainment, LLC, a wholly-owned subsidiary of The Walt Disney Company, is one of the world’s most prominent character-based entertainment companies, built on a proven library of over 8,000 characters featured in a variety of media over seventy years.  Marvel utilizes its character franchises in entertainment, licensing and publishing.  For more information visit marvel.com.