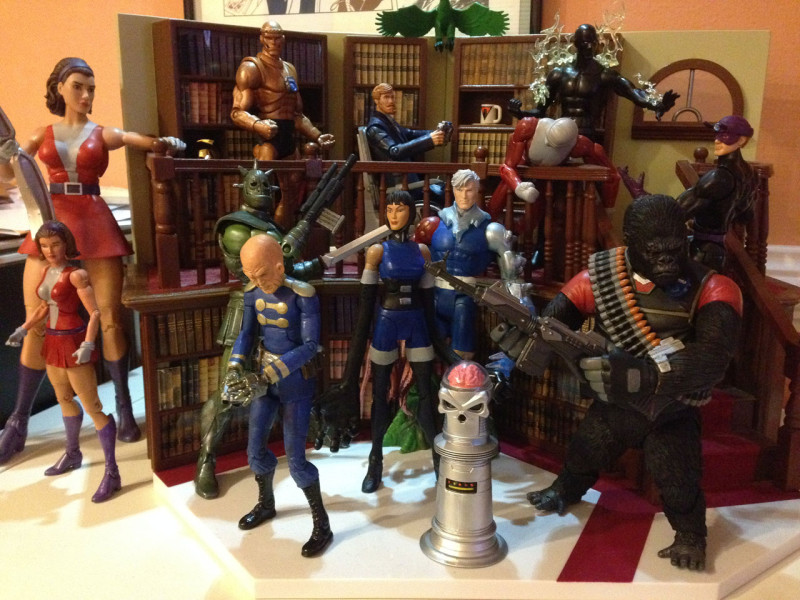 The Doom Patrol is finally getting an upgrade! Now with the much needed leader The Chief! And what is the Doom Patrol without their enemies the Brotherhood of Evil!!

The Chief is a Starman head on a Dent batman body with a Professor X wheelchair.

Robotman is a repainted Robotman with added height in the midsection, new feet and a modified head so it fits higher adding height.

Mento is a DC classics body with Specter gloves and Harvey Dent head with sculpted helmet.

General Immortus is made from a Riddler body from the Batman TV series, with Supergirl boots, IronMan hands and a sculted head using Dasaad’s face.

Madame Rogue is based of her look from The Teen Titans show but in her blue color scheme. Arms are from a Mr. Fantastic, base is a Superwoman body with sculpted details and topped with a Zatanna head with sculpted hair.

The Brain’s battle tech is random fodder that can be attached using DC classics Orion’s harness.

Mallah is made from a King Kong toy and Team Fortress Heavy heavily sculpted over. It has two different heads, swappable hands to carry many different types of weapons.

Arsenal is made with a DC Classics Ares with a gun and sword made from random bits and a original sculpted head.