We caught the announcements of the first Guardians of the Galaxy set and the CUUSOO Ghostbusters ECTO-1 as they hit the interwebs as Toy Fair kicked off. LEGO was kind enough to send official press releases and hi-res pics for those sets and more. Some highlights from LEGO: 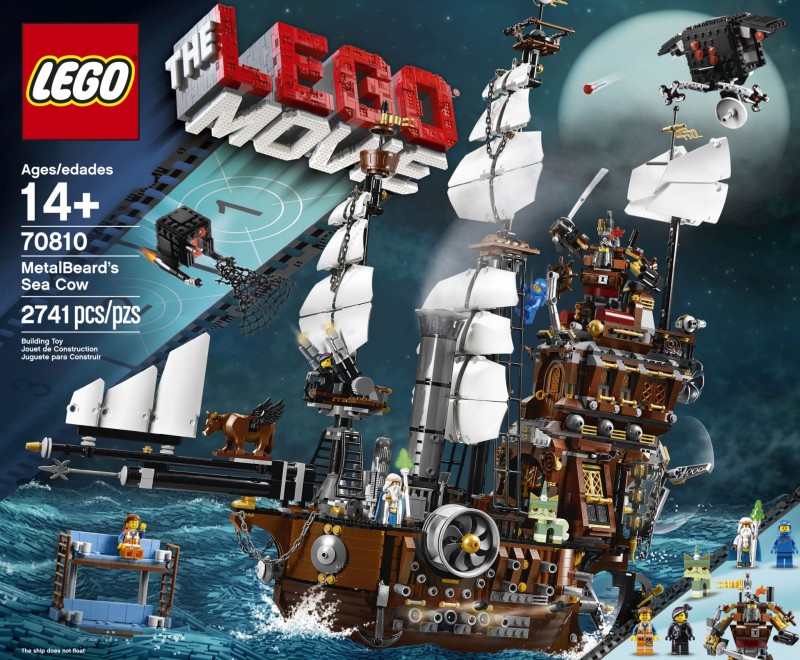 Read on for the official releases and pics!

Help the heroes of “The LEGO® Movie” escape the Micro Managers on Metal Beard’s Sea Cow!

Shiver me timbers, the Micro Managers are approaching the heroes and Metal Beard aboard his wacky Sea Cow ship. Builders can role play climbing the mast to keep a look-out or fire the powerful cannons from the side of the ship to repel the Micro Managers — one has flick missiles and the other can shoot a net! Raise the anchors, spin the rear propellors and steer the ship to safety with a mini version of Metal Beard at the wheel. Plus, this is the only “The LEGO Movie” set that includes the famous double-decker couch. Includes 4 minifigures: Emmet, Wyldstyle, Vitruvius and Benny and 2 brick-build characters: Metal Beard and Queasy Kitty.

Available for sale only through LEGO channels beginning March 2014 via shop.LEGO.com, LEGO Stores or via phone:

When we learned that our flights were canceled and wouldn’t be able to rebook in time to make it to the LEGO event at Toy Fair, my wife took me to see the LEGO movie. It was some really great fun, and a made for marketing dream come true for LEGO. The Sea Cow was a pretty amazing vehicle in the movie, and now my wife is clamoring to get every version of Kitty, including the Queasy Kitty that comes with this massive set.

More LEGO Movie sets, including two with other versions of Kitty that my wife must have:

Here’s some info on LEGO Star Wars Rebels, which marks the 15th year of LEGO holding the Star Wars license:

NEW YORK, AMERICAN INTERNATIONAL TOY FAIR (February 17, 2014) – LEGO Systems, Inc. today announced new LEGO® Star Wars™ products based on the all-new Star Wars Rebels™ animated television series scheduled to premiere on Disney Channel this fall before it appears regularly on Disney XD. The action-filled series is the highly anticipated follow-up to Star Wars: The Clone Wars™ and will introduce a cast of exciting new characters in the Star Wars universe. The new building sets were unveiled at a Disney Consumer Products event Monday, February 17 by Freddie Prinze, Jr., who stars as Kanan Jarrus in the new Star Wars Rebels series. The company presented him with a custom 2-foot tall replica of his minifigure made completely out of LEGO bricks by Master Builders. 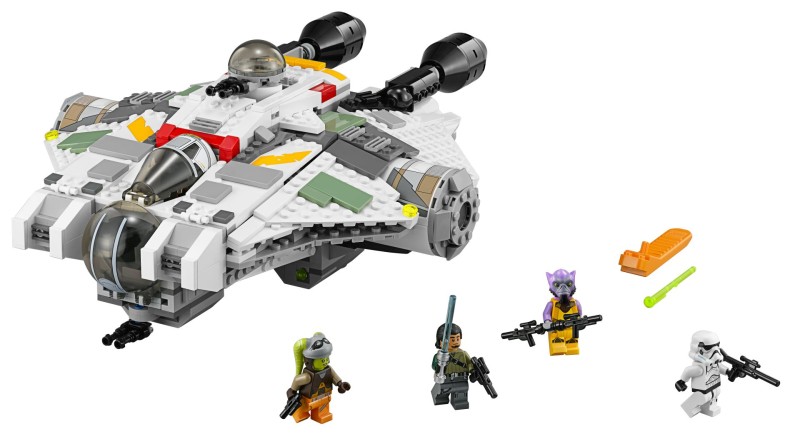 LEGO Star Wars The Ghost building set is based off of the Rebel heroes’ starship, The Ghost, which has dual cockpits, a 360-degree rotating turret, two spring-loaded shooters and ejecting escape pods. The building set features 929 pieces and several new LEGO minifigures with assorted tools including Kanan Jarrus, Hera Syndulla, Zeb and a Stormtrooper™. Designed for ages 9 and up, the kit will retail for $89.99.

The second building set, LEGO Star Wars Phantom, is an attack shuttle that works in conjunction with The Ghost set. The two models can be combined and the Phantom model features 234 pieces and includes folding wings, tools and a detachable cockpit with cargo hold where pilot Ezra Bridger can store his cadet helmet and blaster. Ezra Bridger and his grumpy Droid companion, Chopper, are also brought to LEGO minifigure form. The set is designed for ages 7 and up and will retail for $24.99.

The LEGO Group and Lucasfilm Celebrate 15 Great Years Together
The introduction of LEGO Star Wars Rebels coincides with the 15th anniversary of the LEGO Star Wars collection, the first licensed property ever to come to life in LEGO form. The LEGO Group and Lucasfilm partnership has produced a wide variety of iconic construction sets since the first toys were released in 1999. Through the years, the LEGO Star Wars toy brand has offered more than 300 unique building sets from the original trilogy and newer storylines.

The two LEGO Star Wars Rebels models join 23 other new LEGO Star Wars sets that will be introduced throughout the anniversary year, including such icons as the Snowspeeder™ and the Imperial Star Destroyer™. A new collection of Microfighters builds mini versions of Star Wars icons and each includes a collectible minifigure.

15 Years of LEGO Star Wars
Since its launch in 1999, LEGO Star Wars has connected generations of fans who grew up with the original Star Wars films and building with LEGO bricks to today’s children who discover the Star Wars universe through exciting new content and toys, making it one of the best examples of intergenerational play.

“The 1999 introduction of LEGO Star Wars marked the first time we partnered with a studio to bring someone else’s stories and characters to life, and our co-produced line of toys constitutes some of our best-selling and most beloved LEGO products around the world,” said Jill Wilfert, vice president of licensing and entertainment for The LEGO Group. “We are thrilled to be celebrating the 15th year of our successful partnership with Lucasfilm and we look forward to continuing to deliver a creative LEGO building experience for Star Wars fans of all ages for years to come.”
# # #

About LEGO Systems, Inc.
LEGO Systems, Inc. is the North American division of The LEGO Group, a privately-held, family-owned company based in Billund, Denmark, one of the world’s leading manufacturers of creatively educational play materials for children. The company is committed to the development of children’s creative and imaginative abilities, and its employees are guided by the motto adopted in the 1930s by founder Ole Kirk Christiansen: “Only the best is good enough.” Visit the virtual LEGO world at www.LEGO.com

About Lucasfilm Ltd.
Lucasfilm Ltd. is one of the world’s leading film and entertainment companies. Founded by George Lucas in 1971, it is a privately held, fully-integrated entertainment company. In addition to its motion-picture and television production operations, the company’s global activities include Industrial Light & Magic and Skywalker Sound, serving the digital needs of the entertainment industry for visual-effects and audio post-production; LucasArts, a leading developer and publisher of interactive entertainment software worldwide; Lucas Licensing, which manages the global merchandising activities for Lucasfilm’s entertainment properties; Lucasfilm Animation, which is currently producing content for film and television, including Star Wars: The Clone Wars, a CG-animated half-hour television series; and Lucas Online creates Internet-based content for Lucasfilm’s entertainment properties and businesses. Additionally, Lucasfilm Singapore, produces digital animated content for film and television, as well as visual effects for feature films and multi-platform games. Lucasfilm’s motion-picture productions include three of the 20 biggest box-office hits of all time and have received 19 Oscars and more than 60 Academy Award nominations. Lucasfilm’s television projects have won 12 Emmy Awards. Lucasfilm Ltd. is headquartered in San Francisco, Calif.

STAR WARS, Star Wars: Rebels and related character names are trademarks and/or copyrights, in the United States and other countries, of Lucasfilm Ltd. and/or its affiliates.

I’ve pretty much decided that if my wife wants every version of Kitty from the LEGO Movie, I will get this Ghostbusters set to go along with my DeLorean Time Machine:

Who ya gonna call? LEGO® Ghostbusters™!

Celebrate 30 years of ghostbusting action by building the iconic Ghostbusters™ Ecto-1 car out of LEGO® bricks. Selected by LEGO Cuusso members based on an original concept submitted by Brent Waller, a 3-D Environment Artist in the video game industry from Brisbane, Australia, this fun and iconic vehicle from the blockbusting ‘80s movie is fully loaded with all the paranormal detection equipment needed to track down those ghastly ghosts. It also features cool Ghostbusters logo decoration, removable roof, tracking computer and seats for 3 minifigures.

Set also includes a booklet containing building instructions, selected images and behind-the-scenes details about the classic Ghostbusters film. So if there’s something strange in your neighborhood, strap on your proton pack and get ready to help Peter Venkman, Ray Stantz, Egon Spengler and Winston Zeddemore bust some those ghosts! Four minifigures with proton packs included.

Available for purchase beginning in June, 2014 at select toy retailers and via LEGO channels.

Finally, here’s a much higher-res picture of the Guardians of the Galaxy Milano Spaceship Rescue set: 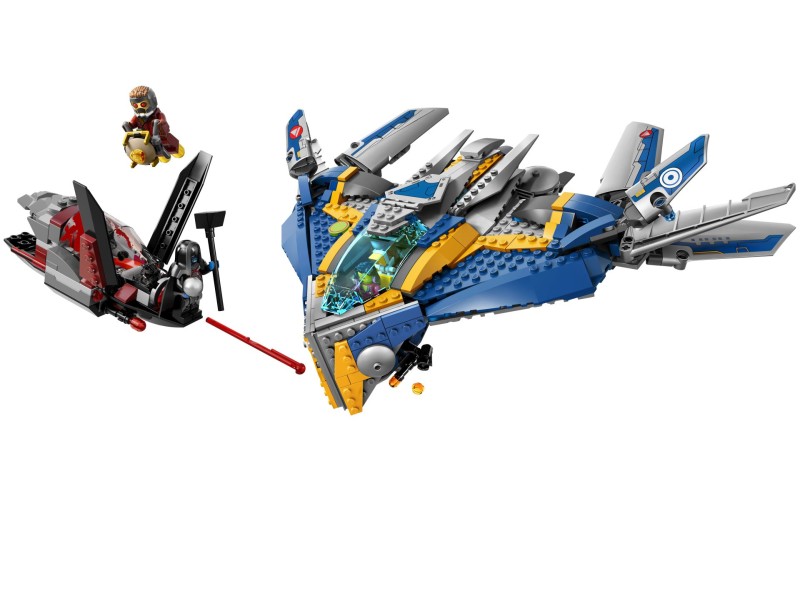 Two more GotG LEGO sets will hit around the same time as the Milano. I can only hope we’ll see a LEGO Rocket Raccoon and Groot in the mix. With the Marvel license, I’m wondering if we’ll see anything mutant-related, since we’ve got X-Men: Days of Future Past hitting theaters this summer. And on that note, it will be somewhat quieter on the DC Super Heroes front, with no movie support this year.

All in all, it could be a wallet-breaking year – especially if my wife’s really got the LEGO bug thanks to the LEGO Movie!