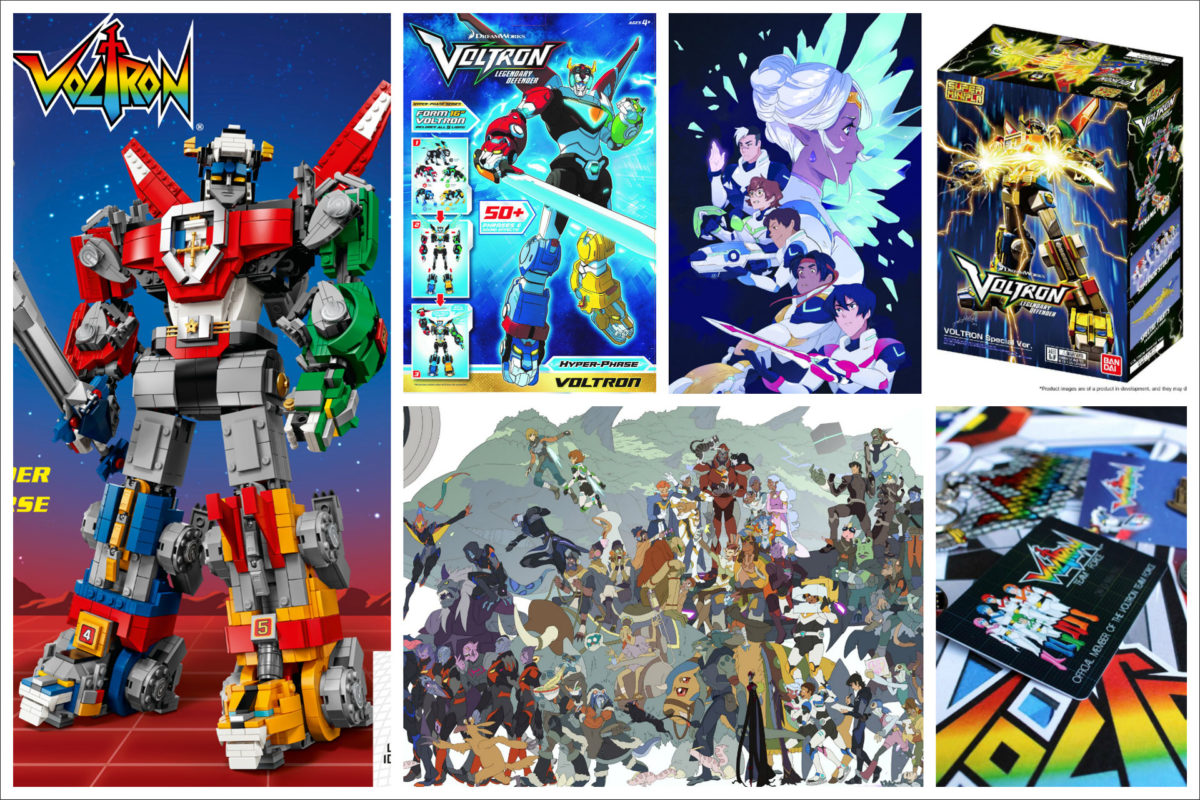 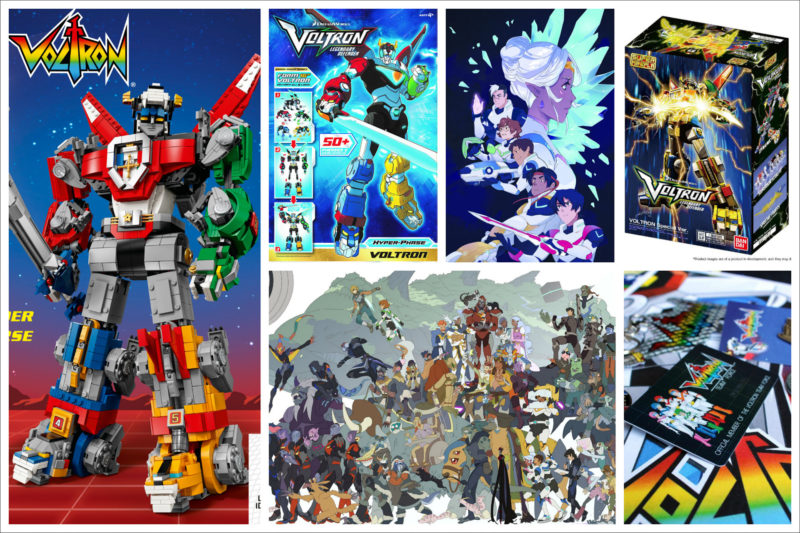 Fans of the critically-aclaimed Netflix original series, Voltron Legendary Defender, will have plenty to do at San Diego Comic-Con this year.

Read on for all the details!

Join executive producers Joaquim Dos Santos and Lauren Montgomery, story editor Josh Hamilton, Rhys Darby (voice of Coran), Bex Taylor-Klaus (voice of Pidge) and Jeremy Shada (voice of Lance) in 6BCF for a special screening and a sneak peek as the paladins of Voltron begin a perilous journey home. The panel will take place on Friday, July 20, and will be moderated by Kyle Anderson, Associate Editor of Nerdist. 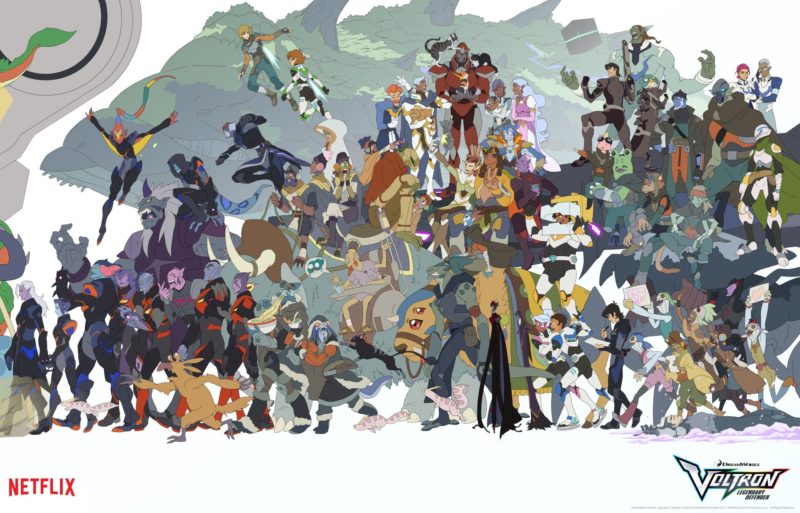 On Saturday morning, Joaquim, Lauren, Josh, Bex and Rhys will be signing an SDCC-exclusive poster created by the Voltron crew. Limited tickets will be made available in advance in the Autograph Area.

A limited DreamWorks Voltron Legendary Defender signing with Joaquim Dos Santos, Lauren Montgomery, Rhys Darby, and Bex Taylor-Klaus will take place on Saturday in the Autograph Area at the San Diego Convention Center. Drawing for Line Tickets to be held Saturday at 9:00 am in the Autograph Area.

LEGO has unveiled the first official images of the LEGO Ideas Voltron set inspired by the ’80s cult classic animated Voltron TV series and the modern DreamWorks Voltron: Legendary Defender series. The set, announced earlier this year, is based on a concept from the fan-fueled LEGO Ideas crowdsourcing platform.

It’s time to defend the universe so get ready to form LEGO® Ideas 21311 Voltron, the biggest buildable LEGO mech ever! This awesome set features buildable and highly posable black, blue, yellow, red and green lions with specially designed, extra-strong joints to combine them all and create the Voltron super robot, plus a huge sword and shield that attach firmly to Voltron’s hands. Ideal for display or to recreate thrilling action from the original 1980s animated Voltron TV series and the modern DreamWorks Voltron: Legendary Defender series.

Voltron is the newest addition to the Super Mini-Pla product line from Bandai Shokugan and is set for general wide release in August. Bluefin has a special convention exclusive version of the Super Voltron Super Mini-Pla from Bandai’s Shokugan brand at SDCC. This special Voltron variant includes exclusive box-art and an additional effect part to recreate the “Form Blazing Sword” sequence. It will be offered to Con attendees at the Bluefin Booth #401 with an MSRP of $70.00.

Pre-orders for the Standard Edition of Voltron are available now; MSRP will be $62.00. Bluefin is the official North American master distributor for Bandai Shokugan.

Legendary “Defender Of The Universe” Debuts In A Rare Version Available Only At The Nation’s Premiere Pop Culture Convention; Kit Features 5 Fully Articulated Lions That Combine To Form The Iconic Giant Robot

Anaheim, CA, June 12, 2018 – Bluefin, the leading North American distributor of toys, collectibles, and hobby merchandise from Japan and Asia, announces a special version of the Super Voltron Super Mini-Pla from Bandai’s Shokugan brand that will be offered as a convention exclusive at the 2018 Comic-Con International.

This special Voltron variant includes exclusive box-art and an additional effect part to recreate the “Form Blazing Sword” sequence and is not found in the standard version of the model kit. It will be offered to Comic-Con attendees at the Bluefin Booth with an MSRP of $70.00. During the convention Bluefin will offer a wide array of products for sale from popular Bandai brands including Bandai Hobby and Bandai Shogukan.

Comic-Con International is one of the nation’s largest comic book, science fiction, and pop culture events, and will take place July 18th–22nd at the San Diego Convention Center, in San Diego, CA. Bluefin will be located in Booth #401. Complete details on Comic-Con are available at: comic-con.org.

Voltron is the newest addition to the Super Mini-Pla product line from Bandai Shokugan and is set for general wide release in August by authorized Bluefin retailers nationwide and also from select leading online outlets. Pre-orders are available now; MSRP will be $62.00. Bluefin is the official North American master distributor for Bandai Shokugan.

Voltron is the legendary hero from one of the greatest giant robot anime action series of the 1980s and returns in collectible form in an impressive new Super Mini-Pla model kit that stands more than 7 inches tall when completed. The Black Lion, Red Lion, Green Lion, Blue Lion, and Yellow Lion are each fully articulated and poseable and combine together to form the iconic Voltron robot. Accessories include a Spinning Laser Blade and Blazing Sword. Parts from each of the lions also may be combined to form a Shokugan original mega-blaster weapon.

As the Super Mini-Pla name implies, this compact model kits offer simple pre-colored snap-together assembly. A nipper or sprue cutter (sold separately) is highly recommended for assembly, but the kits do not require glue.

Based in Anaheim, CA, Bluefin built its reputation as a leading distributor of Japanese toys, collectibles, novelty and hobby products. In recent years, Bluefin has grown to include a range of high quality collectible lines from Asia and has established itself as the official North American consumer products and retail development partner for Studio Ghibli. Selling to thousands of specialty, chain and independent stores, Bluefin is an official North American distributor for Bandai Hobby, Bandai Shokugan, and Storm Collectibles, and is the sole provider of Bandai Tamashii Nations products, and is also the exclusive and official distributor for Mr. Hobby, SEN-TI-NEL and Flame Toys. Additional information is available at: www.bluefincorp.com. 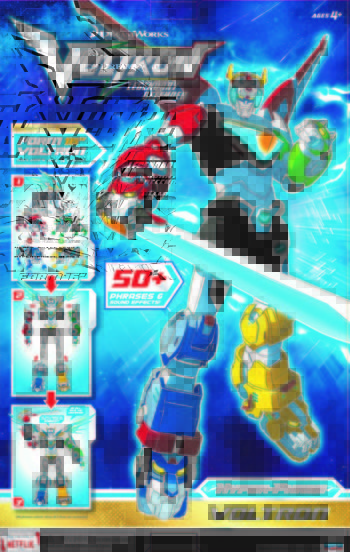 Voltron was built to harness the mysterious Quintessence energy and establish peace and harmony throughout the universe! Face with the Galra’s innumerable armies, the Voltron team taps into Princess Allura’s unique connection to the Quintessence and imbues the Lions with this energy, upgrading their weapons systems and supercharging this robotic defender!

The legend comes alive when the Legendary Lions are combined to form the unbeatable defender of the universe, Voltron! These five powerful Lions transform and combine to form a towering 16” Voltron action figure with lights and over 50 phrases and sound effects from the DreamWorks ™ series Voltron legendary Defender. Includes all new Quintessence enhanced projectile launchers! (JAN189071) Limited to 3,000 pieces.

Comic-Con attendees will be able to preview this item at the Diamond PREVIEWS Booth #2401 and purchase from participating retailers on the show floor.

You can preorder now from Entertainment Earth:

Lion Forge Comics will have an exclusive variant of Voltron Legendary Defender Series 3, Issue 1, with cover art by Keezy Young at booth #5543. It is limited to 400 copies.