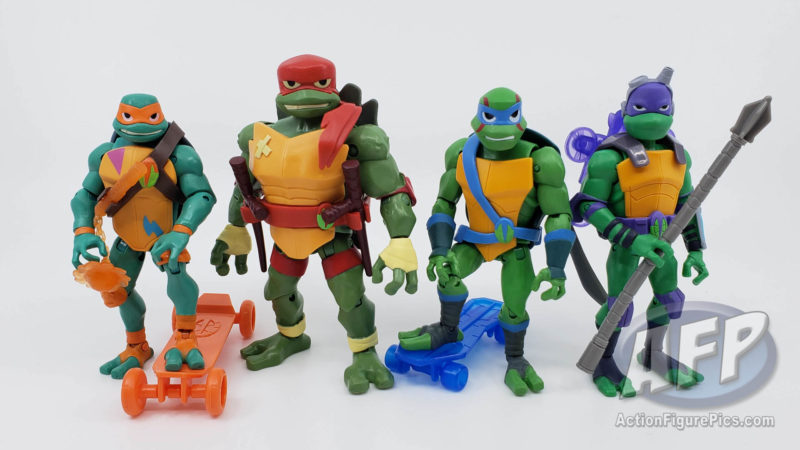 This fall, Nickelodeon debuted Rise of the Teenage Mutant Ninja Turtles, the fourth animated TMNT show. Earlier this month, Playmates Toys launched the accompanying toy line. Our friends at Playmates were kind enough to send us five figures from the new action figure assortment – the four Turtles, because no review could be complete without them, and Baron Draxum, the main baddie from the new show.

To start, here are the particulars of the action figure assortment:

Over the years, I’ve become accustomed to action figures of the Turtles being carbon copies of one another. Usually, they just have different bandanna colors and weapons. The new show, however, has broken new ground. In this iteration, the Turtles are each from different turtle species, with different shapes and sizes.

The toy line leans into this, giving each a unique sculpt mirroring the show. Raphael is the biggest and broadest, while Michelangelo is the smallest. Each Turtle comes with throwing stars and powered-up versions of their new weapon selections. (The changes from their traditional weapons are explained in the first episode in the show.) Aside from Mikey, they also come with non-powered weapons. Additionally, Leonardo and Mikey come with skateboards with working wheels.

Baron Draxum comes with Hunginn and Muninn perched on his shoulders. While the two gargoyles are attached to the figure, he also comes with them as separate accessories, as well as two oozesquito guns.

For action figures in this size and price range, the Turtles are impressively articulated. They have ball-jointed heads, shoulders, and hips. To make up for lack of bicep and hip swivels, the elbows and knees incorporate hinges and swivels. The wrists are swivels, but with longer pegs that allow some tilting. And the ankles have disks and swivels.

This setup allows for a wide variety of poses, and the joints themselves are remarkably sturdy. I was able to get all four turtles balanced in a one-legged pose. They stayed that way!

While Baron Draxum has a similar articulation setup, it doesn’t quite work as well for him. His shoulders are hampered a bit by the gargoyles. And his legs are severely blocked by his garments. He can make an imposing figure, but won’t be quite as nimble as his animated counterpart.

For collectors, you’ll be able to bolster your TMNT collections with cool, highly poseable Turtles from the latest show, without breaking the bank. For people who like playing with their toys, this line packs a lot of value – well-articulated figures with a lot of accessories.

One of my friends, an adult TMNT fan, showed these to his young daughter. She told him, “Oh. My. Gosh. Daddy, I want the blue one… And the red one. And the purple one. And the orange one!” Playmates, I think we just created a new TMNT fan!