Custom Con 23 is on this week, hosted graciously by Joe Acevedo after the Fwoosh requested a switch to the winter slot.  Since we switched to three Custom Cons a year, the summer slot seems to be the lightest, but there’s still a bunch of great entries to look at.

Here’s some of my favorites so far.

In their original incarnation, Mezco Mez-Itz were 3-inch mini-figures they produced for their licensed properties, like Aliens and Dick Tracy, and some original creations, like Pirate Mez-Itz.  I know I have some of the older Hellboy and Predator Mez-Itz around here somewhere – most likely they’ve been gobbled up in my wife’s growing collection of designer figures.

This year, Mezco is relaunching Mez-Itz as a 6-inch urban vinyl brand.  I reviewed the Con exclusive comic Hellboy yesterday (in short – it is awesome) and Mezco is releasing a Cinema of Fear 2-pack with Freddy Krueger and Jason Vorhees soon.

To promote the launch of the new Mez-Itz, Mezco invited customizers and designers from the toy industry to make some customized Mez-Itz.  Their creations were collected into an art show and also shown at San Diego Comic-Con.  In addition to the He-Man by Airmax and Skeletor by SpyMagician (shown above), be on the lookout for entries from Iron Cow, Joshua Izzo, Eddie Wires and more.

END_OF_DOCUMENT_TOKEN_TO_BE_REPLACED

CustomCon 22 starts today and runs through the end of the week.  Some highlights from day one:

END_OF_DOCUMENT_TOKEN_TO_BE_REPLACED

When Mattel first announced the DC Universe Classics 2-pack of Adam Strange and Starfire, I was pretty psyched. You see, I’m a big fan of  Cosmic Odyssey – in that comic, those two characters team up with Lightray of the New Gods to fight an aspect of the Anti-Life Entity. Adam Strange’s adopted planet, Rann, the Earth, and the rest of the universe are at stake! (I can’t believe how nerdy I sound.)

Then, when Mattel revealed that Strange and Starfire would be in their modern day costumes, I was crushed. Starfire’s close enough, but Strange? I knew I would have to do something about that.

END_OF_DOCUMENT_TOKEN_TO_BE_REPLACED 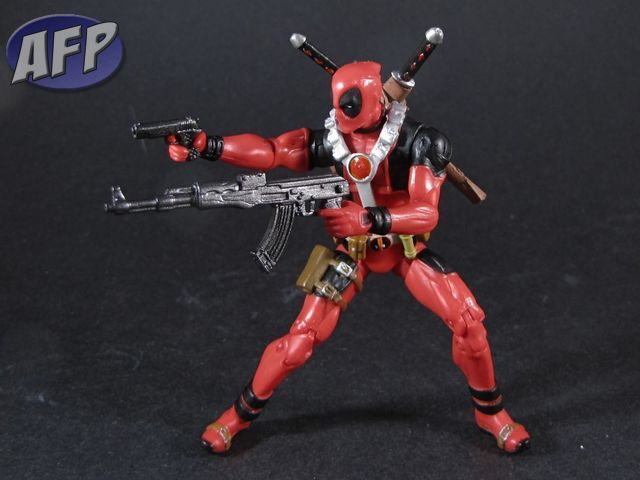 Deadpool, with modifications, by Ron

The Deadpool figure from the X-Men Origins: Wolverine line (whew, that’s a mouthful) is probably my favorite Marvel figure in the 3 3/4-inch scale from Hasbro.  It doesn’t hurt that Deadpool is one of my favorite Marvel characters.  He’is a kickass ninja who, in the hands of a talented writer (no, I’m not talking about Daniel Way), would beat you into submission with in-fight banter.  The stock figure is a pretty good rendition of him, but given how much I like the character, I couldn’t leave good enough alone.