I admit it – I never saw the Boondock Saints movie, so when I saw the brothers in plastic form at San Diego Comic-Con I had no idea what they were.  But, with a sequel, The Boondock Saints II: All Saints Day, coming out next month, I can see why NECA has picked up the license for the first movie, which is a must-see cult classic, according to my movie nerd friends.

The trailer for the sequel was released a couple of days ago at IGN.  For more NECA pictures, check out: San Diego Comic-Con NECA Pics.

New Boondock Saints line has guns at the ready! 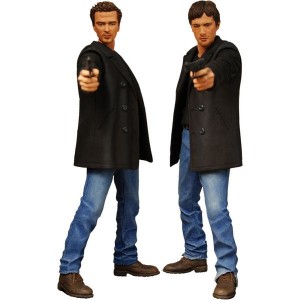 Connor and Murphy McManus are coming for you, and they brought their pennies.

The story of vigilante / religious nutball brothers who take to the mean streets of Boston on a brutal and murderous quest to rid the city of organized crime, Boondock Saints has become one of the true cult classics of the 21st Century. Developing a word-of-mouth DVD audience after a limited theatrical release in 1999, it has defied time, logic and criticism to attain the status of a true phenomenon. Don’t worry, there’s a sequel in the works.

And just in time for the 10th anniversary of the movie’s original release, NECA is psyched beyond belief to unveil our new 7″ scale Connor and Murphy, seen here in a movie-accurate pose ready to take a bite out of crime, execution-style. Each highly-detailed figure comes with a pistol and interchangeable head and plenty of pious justice to unleash on the gang underworld!

Connor McManus and Murphy McManus hit stores in November, and of course they’ll also be available online at our Amazon storefront.