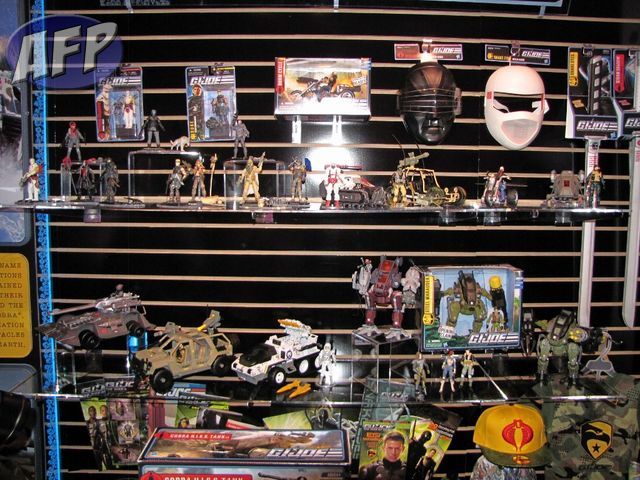 With the G.I. Joe: The Rise of Cobra movie in 2009, the Joe team had a great year, with over 100 figures and vehicles in support of the movie. In the fall of 2010, with Cobra established, the line will shift to the Pursuit of Cobra. This means updated packaging, including a new icon for the Joes and a slightly tweaked icon for Cobra, new designs in the 25th Anniversary style, and no more actor head sculpts.

END_OF_DOCUMENT_TOKEN_TO_BE_REPLACED

The Hasbro JOE team is back with another round of Q&A.  Thanks to Ray and Indy from the Fwoosh for these questions.

1. How did the Attack on Cobra Island and Defense of Cobra Island 7-packs do? Were they successful enough to make more beyond the upcoming Resolute sets? Can you tease all of us Resolute fans with some possible characters that will be showing up in those 7-packs?

The 7 packs did very well and we are excited to be releasing the new Resolute packs in fall 2010, unfortunately we will have to keep you waiting a little longer as they are still being finalized. More information on these packs will be released as soon as possible.

2. What kinds of pairings will be in the “Then and Now” sets?

You will see classic of ring figures with what’s been dubbed as modern era figures.

3. How does movie continuity affect the toy line? For example, since Cover Girl is dead in the movie, would that take her off the table for a Pursuit of Cobra figure? What about the Baroness being “good”?

We try to keep story lines as consistent as possible to avoid confusion but we also try to stay true to fans and the GI Joe lore. It’s all a matter of best judgment and each character is looked at on a case by case basis.