Mattel has announced their lineup of exclusives for San Diego Comic Con 2009 on their Facebook page for MattyCollector.com.

Unless this is an elaborate April Fool’s Day hoax, the heavily rumored 2-pack of Zan and Jayna is coming, with a Gleek pack-in plus a number of fitting accessories.  I’m sure there are many Super Friends fans who are rejoicing, while comic purists are cursing the cruel world.

This JLU Hal Jordan is probably not the one you were hoping for, but Mattel did note that both Abin Sur and Sinestro’s heads were removable!

Form of an action figure! Shape of San Diego Comic Con! That’s right, the one and only Wonder Twins, Zan and Jayna, are available for the first time in Mattel’s DC Universe™ Classics line sculpted by the world famous Four Horsemen with the articulation and detail you have come to expect from this award winning line! Figures are available in special window box packaging complete with character accurate accessories as well as amazing light and sound action! As an added bonus, available ONLY as an exclusive gift with purchase at SDCC : the Wonder Twins’ mischievous monkey, Gleek! Only available at the show, Gleek will not be with the set online afterwards. Gets yours today! Available without Gleek on MattyCollector.com after the show.

DC SUPERHEROES and all related characters and elements are trademarks of and © DC Comics.

For over 20 years fans have waited, and now at long last Mattel is proud to present the first ever figure of He-Ro™, the Cosmic Warrior! He-Ro™ comes complete with magic staff and Power Sword® Complete your MOTU Classics collection today with this special figure sculpted by the Four Horsemen. Limited quantity available on MattyCollector.com after the show.

This is the 30 inch Anti Monitor. At least one hand made hand painted model will be raffled off each day of San Diego Comic Con. Raffel tickets will be exchanged for each 25 Anti Monitor points you redeem. Points can be found on the back of every DC Universe Infinite Heroes figure and multipack set.

Have you been saving your Infinite Heroes Anti-Monitor points? If so, bring 50 points to the Mattel booth to get a free 3¾ Anti-Monitor figure! And for every 25 points you bring (including the first 50) you will receive one raffle ticket to win an exclusive giant 30” hand-painted Anti-Monitor figure! At least one 30” figure will be raffled off each day of SDCC! – Don’t have Anti-Monitor points? No problem. The 3 ¾” figure will also be on sale at the Mattel booth and the show and is available on MattyCollector.com after the show.

DC SUPERHEROES and all related characters and elements are trademarks of and © DC Comics.

At long last Hal Jordan will be joining Mattel’s Justice League Unlimited collection. In this pack, you can get not only Hal Jordan (in his trademark Ferris Aircraft flight suit) but also his predecessor Abin Sur and his mentor/arch enemy Sinestro both in different versions of their Green Lantern uniforms. Plus, as an added bonus, for the first time in the JLU line, all of the heads in this pack are swappable, letting you play out Hal’s transformation from Test Pilot to Green Lantern of Space Sector 2814! Available on MattyCollector.com after the show.

JUSTICE LEAGUE and all related characters and elements are trademarks of and © DC Comics. 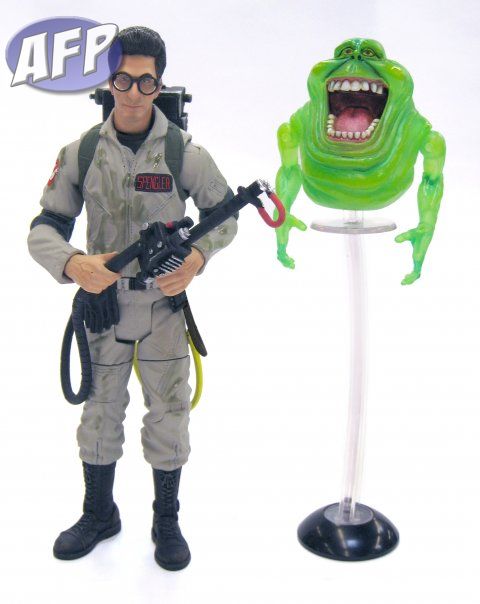 Who ya gunna call for all your Ghostbusters™ action figure needs? Mattel, that’s who! Presenting the first in a line of highly detailed, fully articulated figures of the one and only Ghostbusters™. The first figure in the line, Dr. Egon Spengler, comes complete with Proton Pack and gun as well as a pack-in Slimer figure available no where else. Start your Ghostbusters™ Classics collection today! New figures will be available each month only on MattyCollector.com!