Here’s the final three exclusive variants from this year’s 7th Kingdom exclusives.  With the the 7th Kingdom offerings in the past two years, the minotaurs and elephants, I’ve been selective about which figures to pick up.  This year I may have to go for the full set.  We’ll do a recap of all eleven figures sometime next week.

THE QUEEN AND HER COURT – PART 4

Over the past few days you’ve been introduced to an ever expanding group of warrior women from the Four Horsemen’s fan-favorite property – “7th Kingdom”. In today’s part four of “The Queen and Her Court”, you’ll meet the final three femme fatales which will make up the complete set of 11 figures to be offered through Store Horsemen (http://www.StoreHorsemen.com) at a later date.

Each of the following figures will each be carried and sold through a different online retailer, toy news website, or action figure magazine. 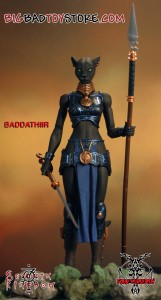 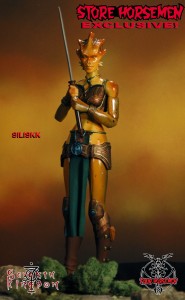 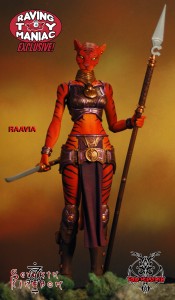 The first of the final three is one of the darkest denizens of the 7th Kingdom – Baddathiir. Baddathiir will be the second of two exclusive variants carried by online toy retailer Big Bad Toy Store (http://www.BigBadToyStore.com) .

Number two on our list today is the slithering soldier mutant – Siliskk. The Four Horsemen’s very own online retail outlet, Store Horsemen (http://www.StoreHorsemen.com) will be the only place to pick up this very limited figure. Siliskk will be sold for $20.00 each and will not be available at Comic Con!

The last but certainly not least of the exclusive variants to be revealed will be offered through online toy news website, Raving Toy Maniac (http://www.ToyMania.com). She’s the crimson cat of the 7th Kingdom – Raavia.

All three of these warrior women will each wield a deadly spear, and a razor sharp small sword. The price of each figure will be determined by each individual retailer at in the near future. At a later date, all three of these figures as well as the eight previously introduced figures will also be available in a complete set only through Store Horsemen (http://www.StoreHorsemen.com) .