Every time I get a new Masters of the Universe Classics figure, I contemplate whether I should even do a review.  VeeBee at the Fwoosh did an awesome First Look when he got Tri-Klops about a month ago.  And it’s always the case that by the time I receive my figure purchase from Mattycollector.com that said figure is sold out.

But hey, this is Tri-Klops we’re talking about!  He was one of my favorite figures in the 200x relaunch of Masters, so I feel compelled.

Tri-Klops ships in what will now be a standard outer box.  It’s white, with the Masters logo on it.  I probably should have taken a picture so I could use it in all my future MOTUC reviews.  Inside is the standard packaging.  The card back reveals his name as Trydor Esooniux Scope, and I never know whether Mattel’s new real names will set off a firestorm.  It’s just Tri-Klops to me.

It’s a nice vanilla pose in the package, with a few rubber bands to cut to get at him.  I like vanilla poses in package, because the risk of joint warpage is much lower.  And even though Tri-Klops was holding his sword, no warpage there either.  In addition to his sword, he comes with a Doom Seeker.  It mounts on a clear plastic stand that is identical to the one that ships with Slimer in the Ghostbuster Egon Spengler package, except its base is black and not clear.

The armor is removable via a snap at the back center of the belt, and the head pops off easily to allow that.  I thought that the visor was intended to be removable too, as there’s a fully sculpted head with Tri-Klops’s surgically sealed eyes underneath it, but as I removed the black skull cap, noticed that there’s a bit of glue there.  Whoops!  No matter – the skull cap fits snugly without any glue, in case you wanted to get a peak under there.

His sword fits into an off-center slot in the back of his armor, and there’s some nicely detailed knives that some people are disappointed are not removable.  I for one am glad that they’re in there permanently, as I am prone to losing small accessories and would hate to see Tri-Klops with any of those three daggers missing.

In addition to the Doom Seeker, which is suitably evil looking, Tri-Klops comes with a special accessory – a glow in the dark ring.  I had forgotten that the ring popped open, so I was more than a little excited to see what might be in there.  Very hard to see, but it’s the Masters of the Universe logo, and not a death pill for killing Orko.  In case you’re wondering, the packaging may claim that this is a figure for adult collectors, but the ring is definitely for kids.  I wear a size 13 ring on my middle finger, and this one is a snug fit on my pinky.  I guess if I were as pimp as Tri-Klops I could wear a pinky ring, but I’m not. 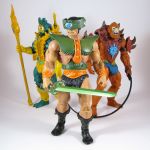 For those of you who collect MOTUC, he fits in perfectly with what’s come before in terms of sculpt and articulation, re-using He-Man’s parts.  Paint-wise, he has some slop on the underside of his chin, and in certain light his torso appears to be a different shade from the rest of his flesh, but I only notice that in the pictures and not when I’m looking at him directly.

There is a little black gunk on the underside of his armor – when I removed it, it left a smudge on his back that I wiped off with my finger.  And the armor does restrict movement in the ab crunch.

I was a big fan of the redesign he got in 200x, and this was the first time I was motivated enough to go dig those out to compare.  Looking at the older figure again, I wouldn’t be crushed if we never got a redo in Classics with 200x designs, but I do prefer the 200x rounded shoulder pads to the flared ones.

As far as whether Tri-Klops has dethroned Man-at-Arms as the biggest badass on my MOTUC shelf – the jury is still out.  They’ve both got the awesome green and orange color scheme.  They both have cool accessories.  They both look like they could rip Beast Man’s arms off.  But Tri-Klops has one distinct advantage – he’d probably kill Orko if he got the chance.

4 thoughts on “Masters of the Universe Classics Tri-Klops”