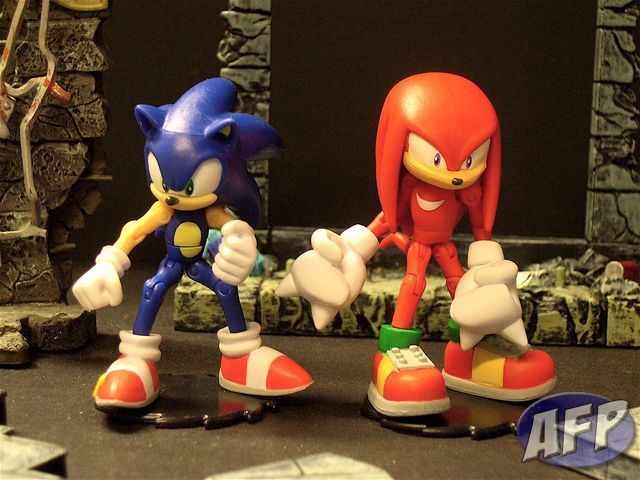 Sonic the Hedgehog is one of those iconic video game characters that everyone knows, he’s pretty much up there in popularity like Mario and Lara Croft. He finally gets the poseable figure treatment courtesy of Jazwares, and today we’ll have a look at two figures from the Sonic 3-inch line – Sonic and Knuckles the Echidna.

Last year Jazwares released Sonic and Tails in their 3-inch line at Toys R Us, and before that there were the 6-inch Super Posers. It seems the  3-inch line has gotten some positive reactions, as locally they pretty much sell out everytime my local TRU’s get a shipment of them. Since then they have released other characters from Sonic’s world like Silver and Shadow the Hedgehog, Sonic the Werehog and I’ve recently seen a two pack with Metal Sonic.

Let’s have a look at Sonic first! 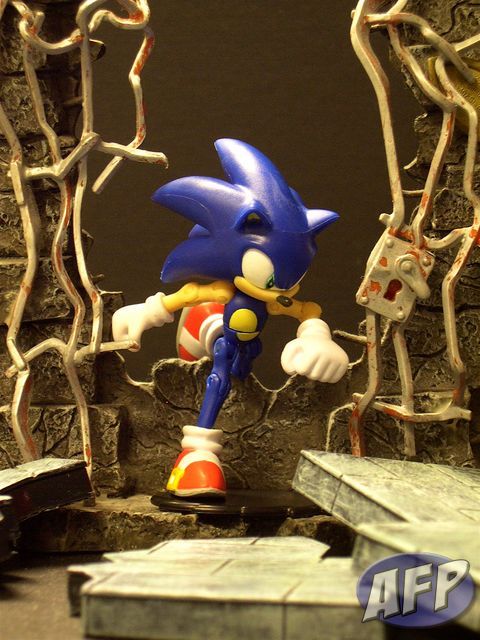 I’m not a Sonic the Hedgehog expert but in my opinion they did a good job in capturing his likeness and attitude. I love how they did his hair spikes, and his proportions look good to me. His face has that pinched brow with  a smirk of a mouth. He’s a serious yet cocky little hedgehog.

He stands about 3 inches and is packed with articulation. He has swivel head, torso, hands and feet. Swivel / hinge shoulders and hips and hinge elbows and knees. The hip articulation takes a little getting used to as he doesn’t really have a crotch where the hips are set. (I can see some people not liking the way they look, but I like ’em.) He has lots of articulation for such a small figure and I am happy about that!

I do wish he had ankle hinge articulation to aid in the running poses. I do understand the decision to omit it because of the size of the figure. If they could figure out a way to add it though, I think it would make the figures better. I noticed some of the Sonic 6-inch Super Posers have this ankle articulation.

The thin limbs feel delicate but I haven’t broken any of ’em while trying to pose them. His head and hand come off easy if you want to customize him.

Now, I bought Sonic on his first release last year, and although I was quite happy with him, I did have a nitpick: I had trouble keeping him standing. Sonic’s head design caused him to be top heavy and it doesn’t help that he has such skinny legs! Even though that is pretty much how he is originally designed in the games, it was kinda sad that my Sonic would not stand on his own properly. Now Jazwares seems to have listened to the fans and added stands to go with the figures to at least help with the top heavy problem that the figures seem to have. I recently bought the Sonic Black Knight version and swapped his left armored hand with my old Sonic’s hand. I did this because the original figure did not have any peg holes underneath his foot. I am pretty sure they will release him with the stand in the near future though. 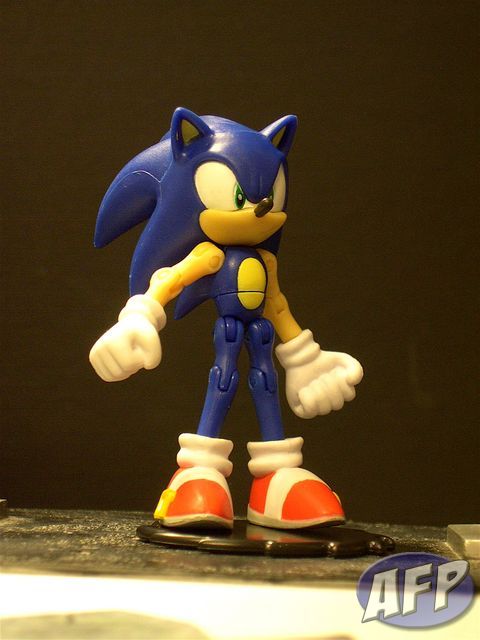 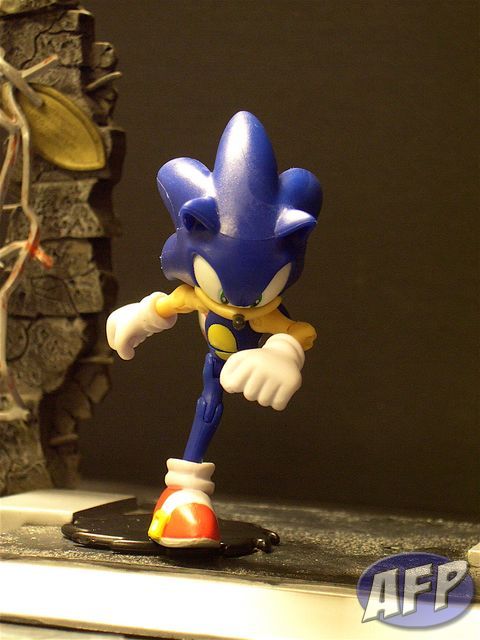 As you can see Sonic here can strike a couple of good running poses, as long as he has support from a stand.

Now let’s have a look at his rival / buddy: Knuckles the Echidna! 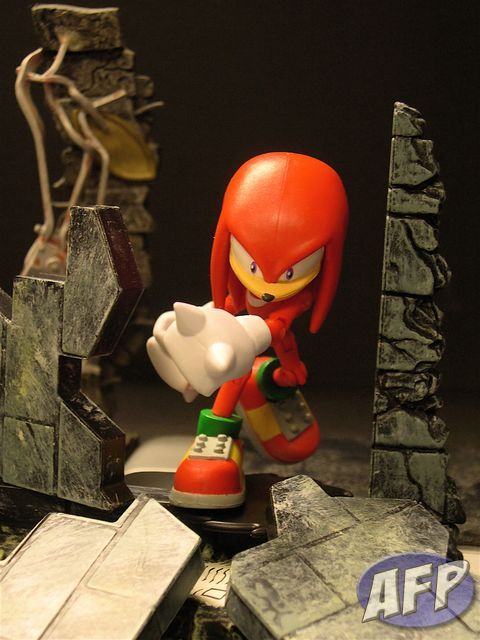 Knuckles first release was a two-pack with a clear, blue Sonic which also came with a collectors 200th issue comic book. I have been meaning to pick it up, but the $12.99 price was keeping me from doing so, as each figure is only $4.99. This time around Jazwares has released him as an individual figure and I didn’t hesitate to pick him up!

Whereas Sonic has speed, Knuckles here packs the punch! I’ve always liked his design from the video games, and this figure captures him pretty well. They really did a good job with his slick hairdo, spiked up knuckles and those big studded shoes.

I did have to go through several Knuckles on the pegs to make sure I had some good paints. Some of the figs had misaligned eyes and / or minor slop. I also had to pick one that had the least prominent mold line that goes across laterally on his snout.

Knuckles has better balance than Sonic, mostly because his hair doesn’t spread out like Sonic’s. He also has a bigger torso and slightly thicker legs. He also stands 3 inches and poses as well as Sonic. You do have to fidget with his hair as it does get in the way of posing his arms. 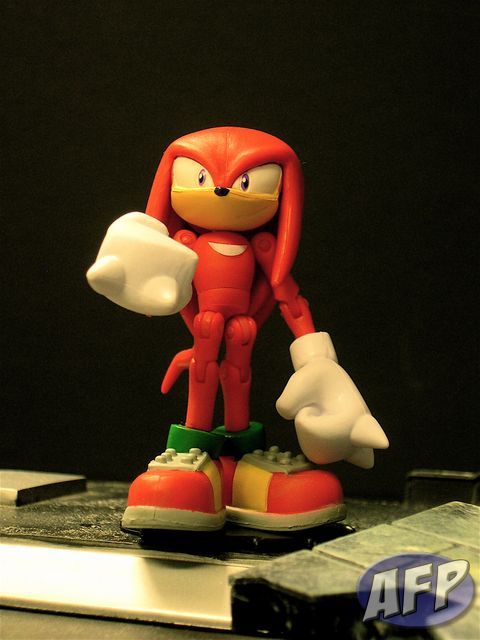 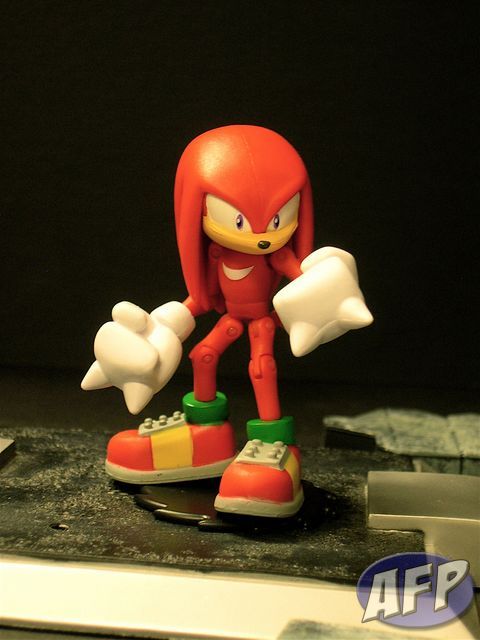 As I mentioned, the newer waves of figures come with a stand shaped like a circular saw, or maybe more like Sonic when he’s rolling around like a ball. It is pretty simple, but it does the job and I like that it’s black so it doesn’t stand out (unintentional, but welcome pun). 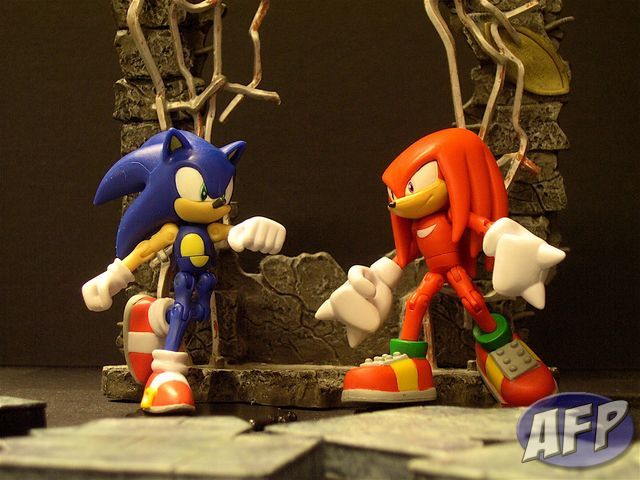 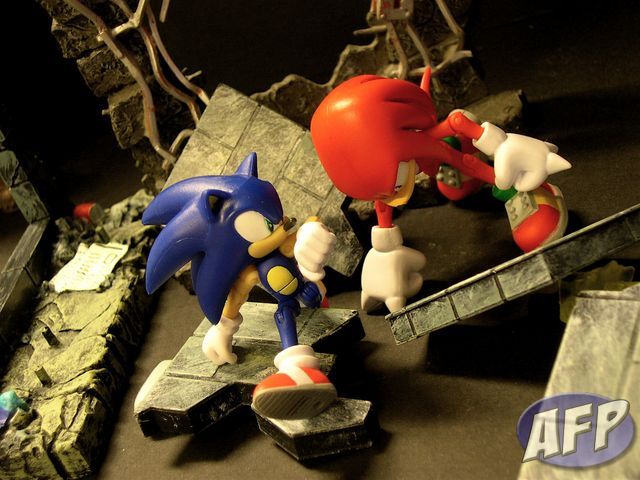 I commend Jazwares for trying to put as much poseability in these small figures. The character designs are kinda tricky when it comes to adding articulation to them and I am glad that Jazwares actually made sure these figures can be posed.

Overall, I am pretty happy with these figures. I love it when we get video game characters that are poseable and have great sculpts. I hope the line does well (it seems to, in my area anyway) so they can release more characters from the games. The recent Toyfare just showed an Eggman (Dr. Robotnik)  and Big the Cat coming down the line.

These guys are available at Toys R’ Us for $4.99 each and they also come in different formats like the two packs ($12.99) and the Sonic Sega All-Stars Racing figures($12.99 ), which come with a racing vehicle.

Hope you guys and gals enjoyed the review!! 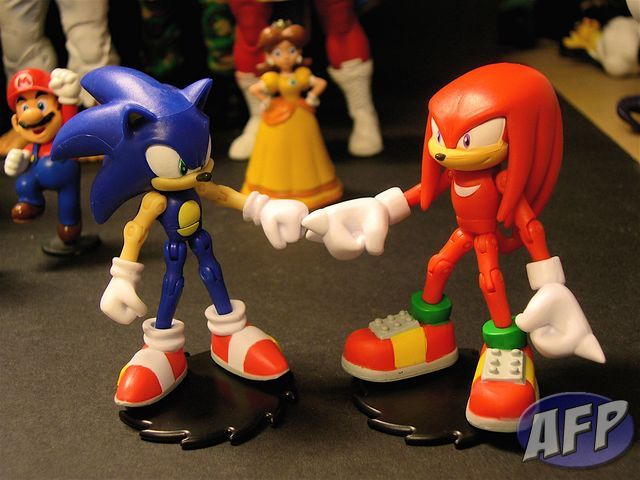