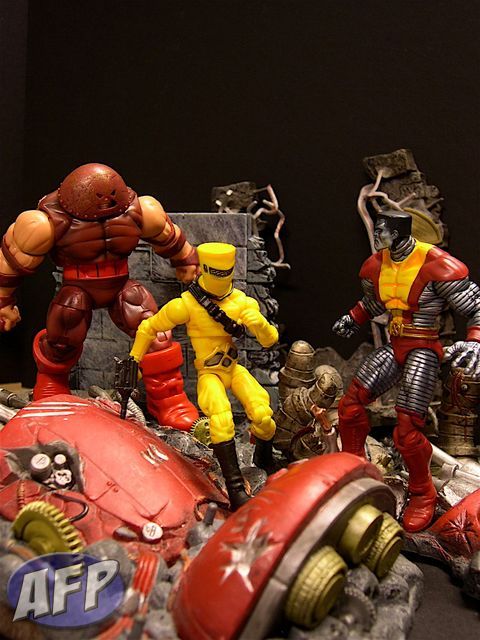 A couple of weeks ago, HasbroToyShop.com started selling their Marvel Universe Wave 8 figures online, it was a quick sellout, and I missed it. I was really looking forward to this wave, as some of the figures included in this wave have some nice, unique sculpts and upgraded articulation. So as soon as they re-listed the figures on the site, I didn’t hesitate to pick these guys up. I managed to pick up Juggernaut, the A.I.M. Soldier, and Colossus, which are the figures I was most excited about (the other figures of this wave are Archangel, Havok and Shadowcat). So what was all my excitement about? Let’s find out!

Let’s start with the unstoppable Juggernaut! 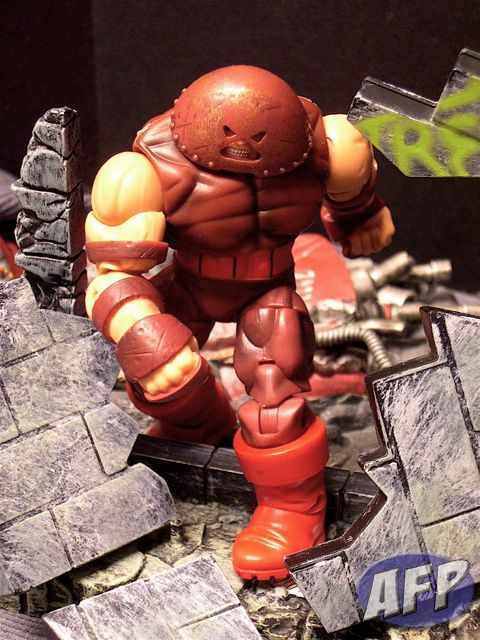 Juggernaut stands about 4.75 inches high, and about 3 inches shoulder to shoulder. He’s about as tall as the Hulk figure from this line. His articulation consists of a ball-jointed head with hinged up and down movement (very little due to the helmet), swivel/hinge shoulders, swivel biceps, hinged elbows and swivel lower arms, which are well hidden under his bands, instead of at the wrist. His torso has up/down and swivel movement with some side to side range. His hip articulation are those dumbell style joints, similar to the G.I. Joe hip joints, except they’re made of plastic instead of metal. He also has swivel thighs, double-hinged knees, swivel boot tops, and hinged ankles. Whew! Now that’s pretty much Marvel Legends style articulation, all of which move really well.

I do wish they start using metal dumbells on the hip joints as the plastic feels a bit flimsy, I feel like I’m going to break them moving the hips too much. Aside from that, the articulation works really well, and you can get some really cool poses out of him. 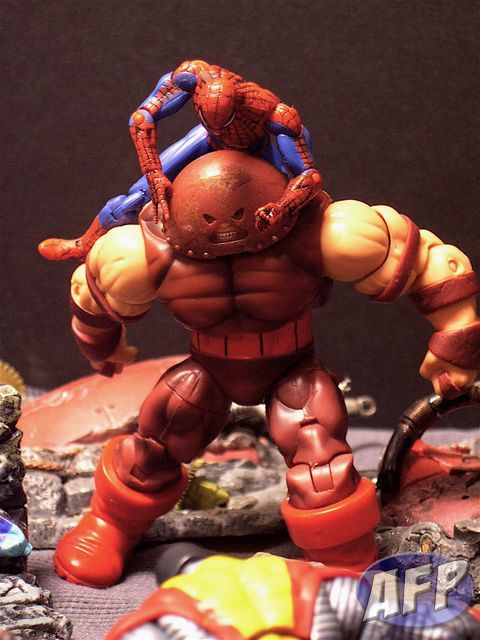 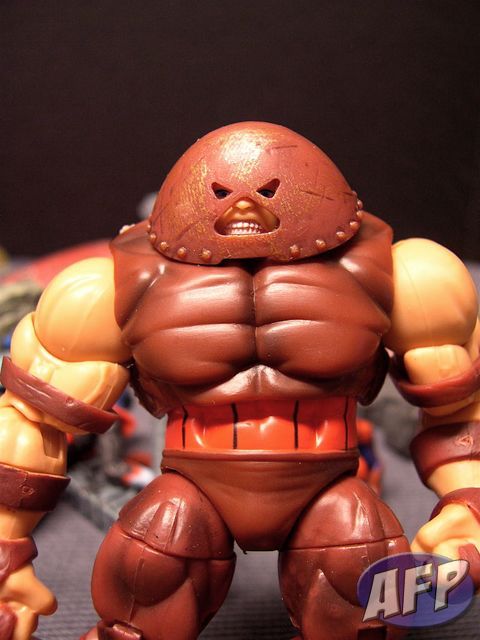 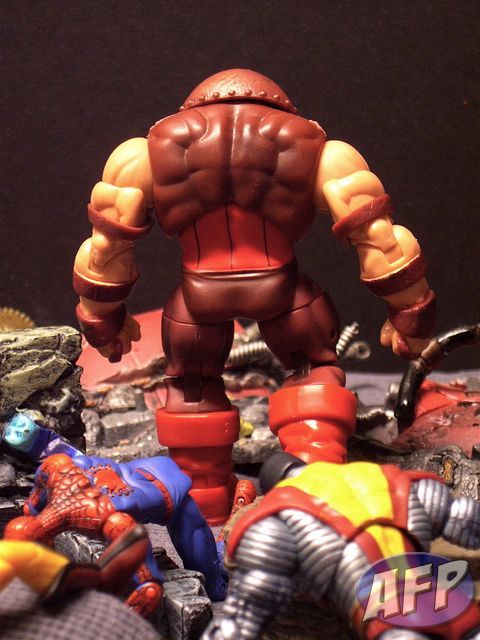 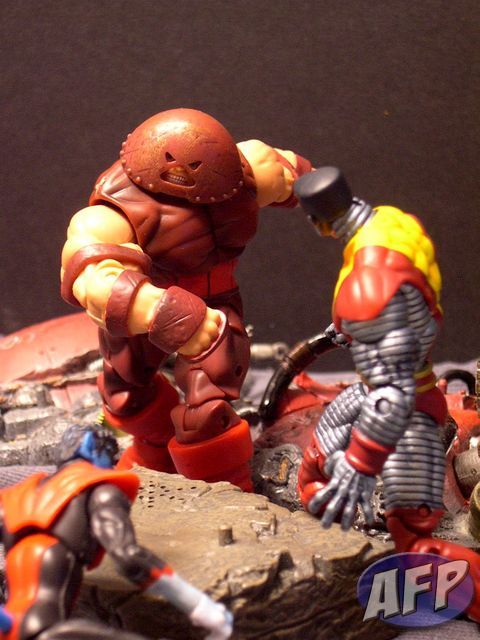 The sculpt is well done, especially his dome helmet, which is sculpted with scratches and rivet detail. The face underneath also looks good and it lines up well with the holes of his helmet. Unlike his Marvel Legend counterpart, his helmet doesn’t come off. Instead, his face is attached to the helmet to make his face and the helmet holes line up. This also lets him turn his whole head altogether. His body has some nice muscle detail and his upper arm even has some veins.

His paint applications are also very nice. As you can see on the pics, there’s some metallic scuffing and scratches on his helmet and his body has some dark tonal paint applications on the muscle creases. My figure did however have some paint slop around the arms, where the bands meet his skin. It’s not too bad, and it’s only noticeable after you’ve been staring at the fig for a while (like I have been!).

Juggernaut comes with the standard extras: a stand with his name and number, and the “Top Secret” envelope insert with a file card, an online code and a note from Juggy to Osborne inside.

I have to say, Juggernaut turned out really well. His proportions are nice, and I can’t wait until they use this body type on big Marvel characters, as lack of articulation has been a problem with previous large figures like the Hulk and the Thing. 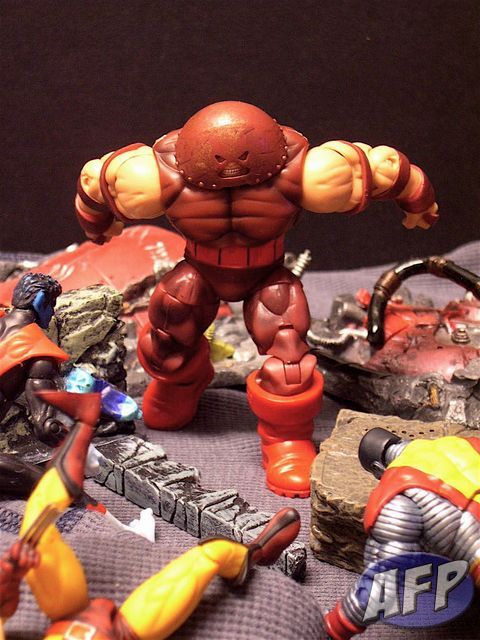 Next, we have the A.I.M Soldier! 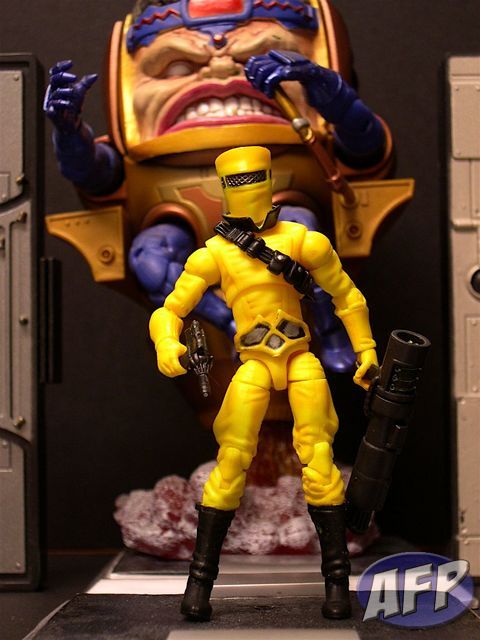 The A.I.M. Soldier stands about 4.25 inches high, and pretty much has the same articulation as Juggernaut. The only differences are he has swivel wrists (instead of near the elbow) and he has swivel/hinge ankles. I hope the hinged head and swivel thighs become standard for MU articulation, as they really do make a difference in posing, and it doesn’t break up the sculpt that much. All these upgrades make posing intuitive, and the A.I.M. Soldier can pull off some nice poses.

His yellow costume has some tonal washes, which looks good. I’m glad they didn’t just go with a flat plastic yellow look.

He comes with two accessories, a pistol and  some sort of bazooka/laser weapon. They both fit well in his hands. He also comes with the standard ” Top Secret ” file inserts, like Juggernaut.

The A.I.M. Soldier is one of the few army builders in the MU line so far. I wasn’t really impressed with the 3-pack they released of the Hand Ninja, Shield Agent and Hydra Soldier, but I really love what they’ve done with the A.I.M. Soldier. I’ve seen pictures of multiple A.I.M. Soldiers, and I have to say they look really good when there’s a gang of ’em. I might have to buy a couple of these figures for the heroes to beat up on! 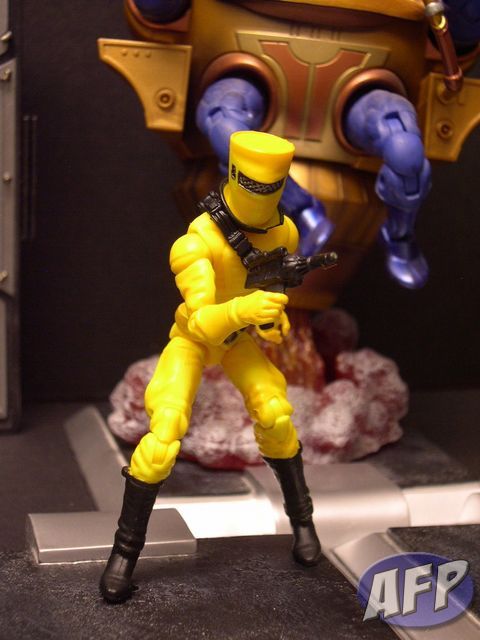 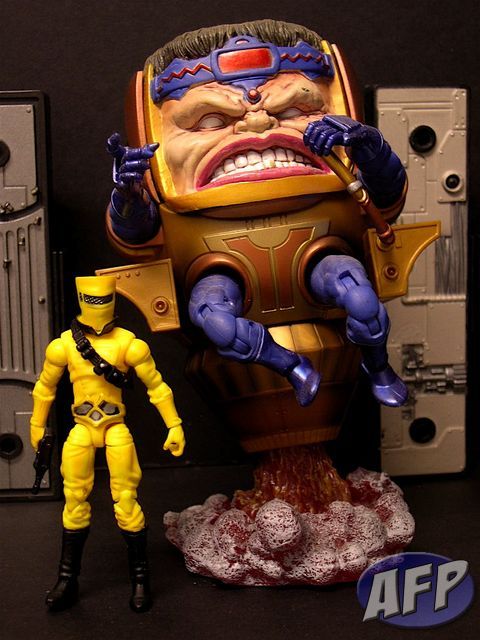 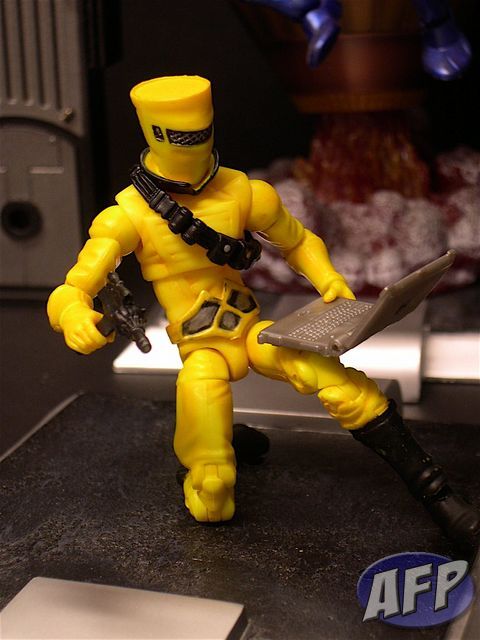 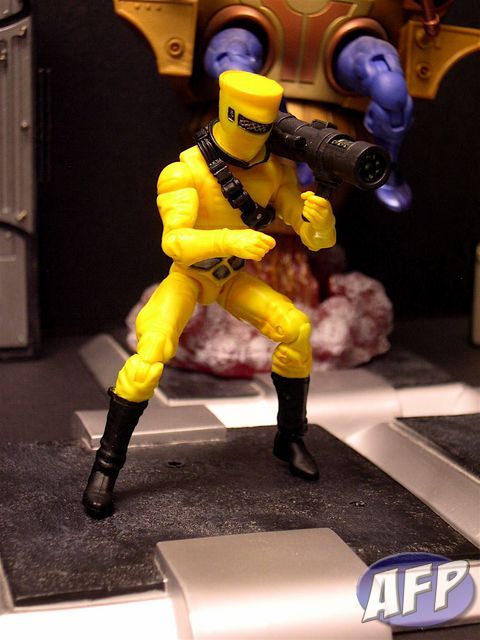 If you don’t mind the size difference too much, he kinda looks good with the Marvel Legends BAF M.O.D.O.K.! 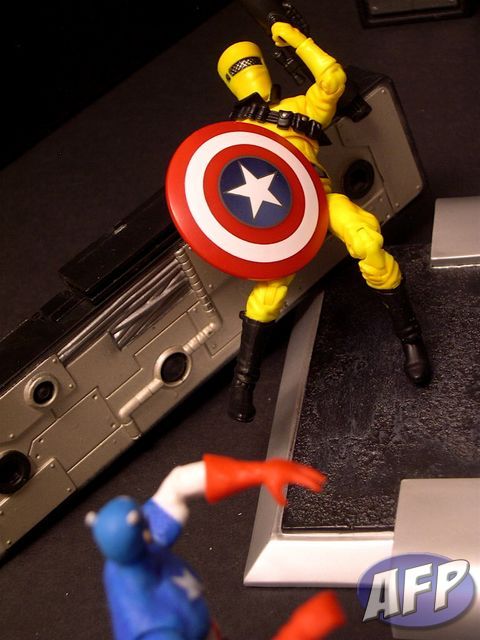 Next, we have the X-Man, Colossus! 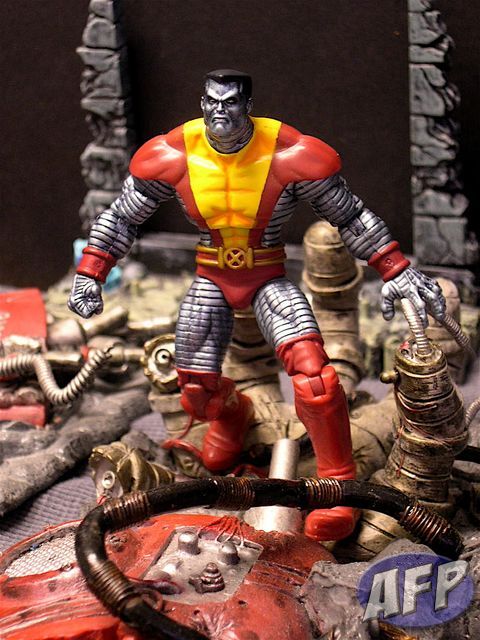 Standing 4.75 inches tall, Colossus has the same articulation as the A.I.M. Soldier. The swivel articulation blends well with his striped body, especially the thigh swivels. He can strike some very nice poses, and I like that they used soft plastic on his shoulder pads for flexibility. He can actually raise his arms a good deal.

He’s got a nice sculpt all around. The detail on his body is well done, the body stripes look good, and he’s got some nice wrinkle detail on his boots. His left hand is an open sculpt, while his right is a fist, which I like, as it adds some asymmetry on the figure. It’s also perfect for those ” I’m ready to punch something” poses. 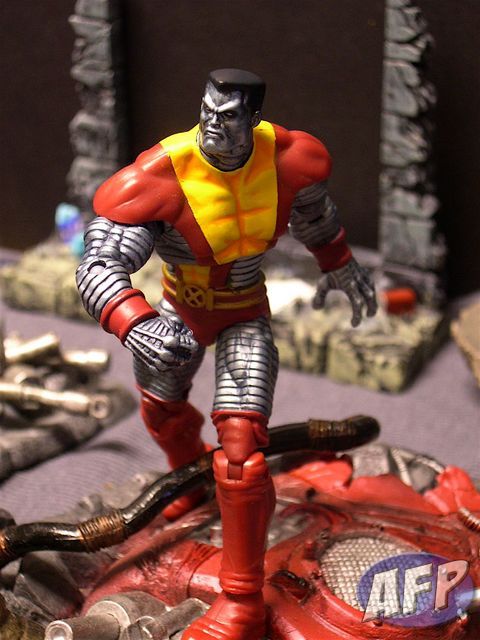 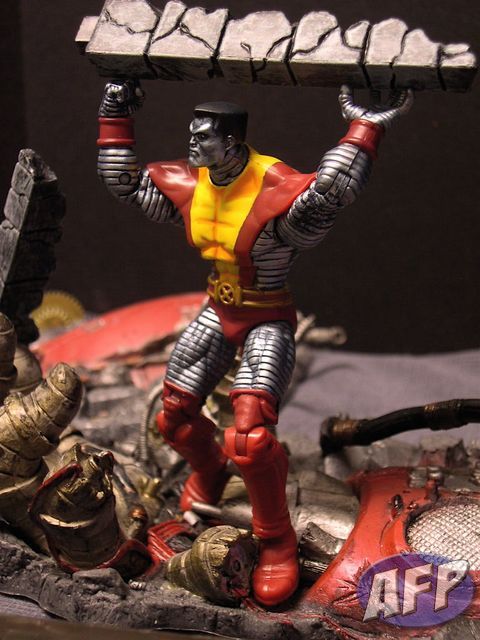 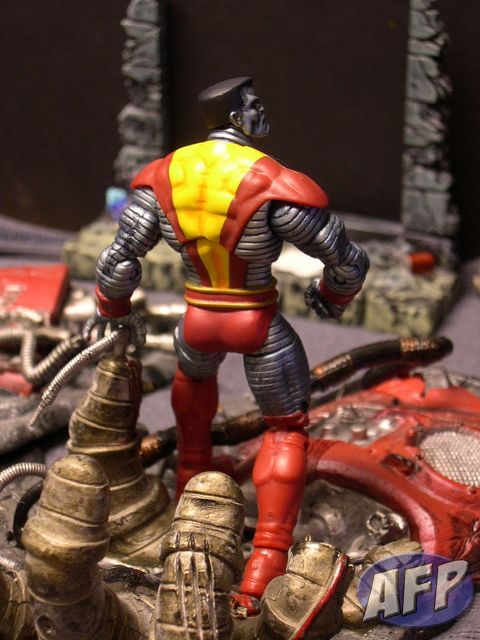 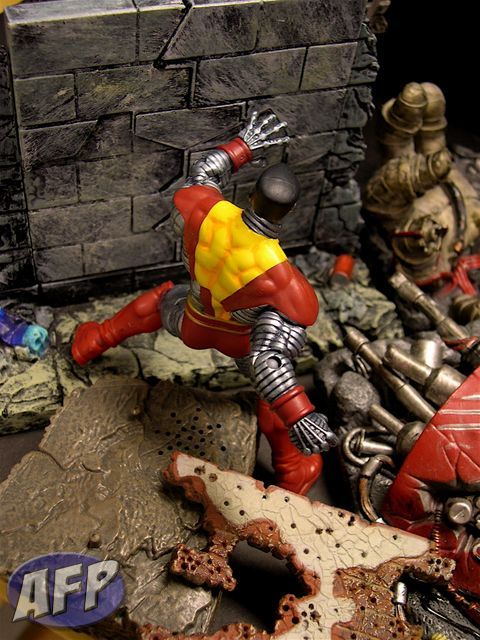 Colossus has always been a favorite character of mine, and I’m sure he has a lot of fan following. His character design just looks so cool visually and I have to say Hasbro did an excellent job with this figure. 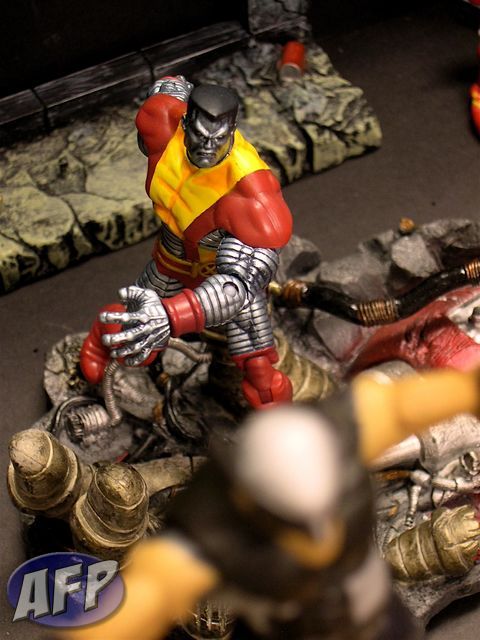 As I stated earlier, I got these guys from Hasbrotoyshop.com for $6.99 each. I checked today and they only have them available as a Wave 8 set of 12, which includes multiples and characters from previous waves,  for $82.99. I haven’t seen them in any of the big box stores like Target or Walmart yet, but I have heard some online stores and local comic book stores have started receiving them.

If these figures are a taste of what Hasbro has in store for the future of the Marvel Universe line, then I’m excited! The quality and execution of the these three remind me of the Marvel Legend days, and I do hope Hasbro keeps this up. I’ve always thought some of the early MU figures were poorly executed, and some of the base bodies that they keep re-using have been keeping me from buying more figures. With the good work they’ve done on the Iron Man line, and the recent Thor and Extremis Iron Man in MU, and now with these three figures, I think they’re on the right track.

Thanks for looking and I hope you all enjoyed the pics! 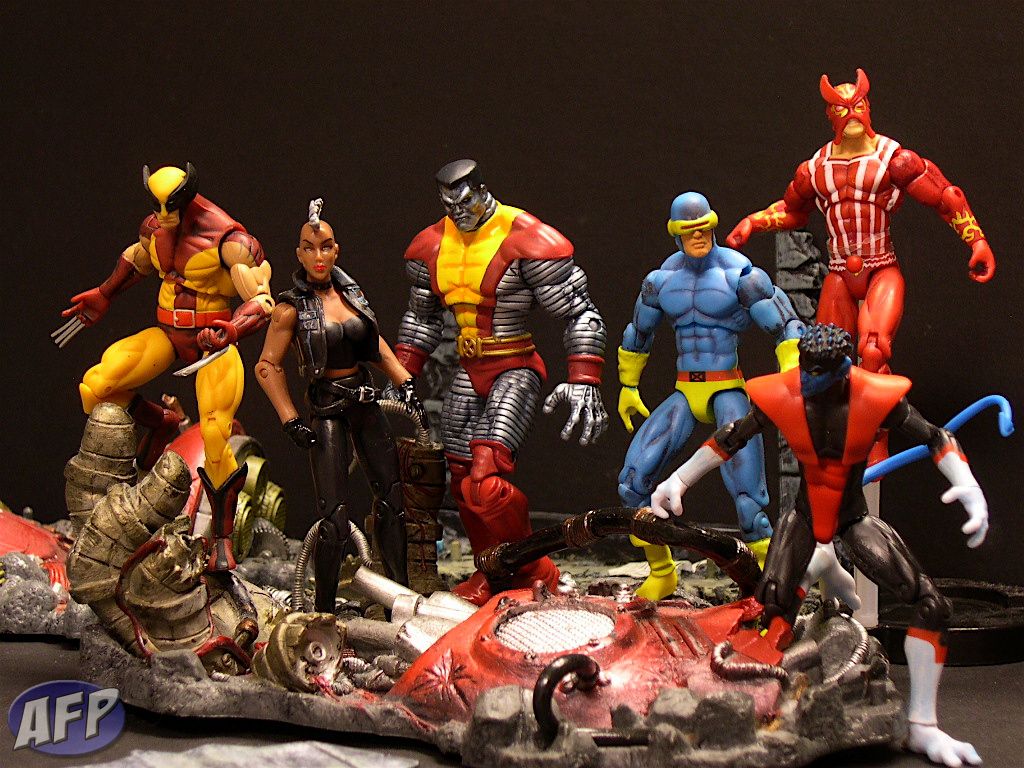