My wife was out shopping last night and called me to ask if I wanted any A-Team toys (she’s a keeper!) Sadly, they did not have any of the A-Team vans there, so I passed. After seeing these pics at IAT, I’m pretty sure I am going to have to hunt one of these babies down. The van is almost like another member of the team! 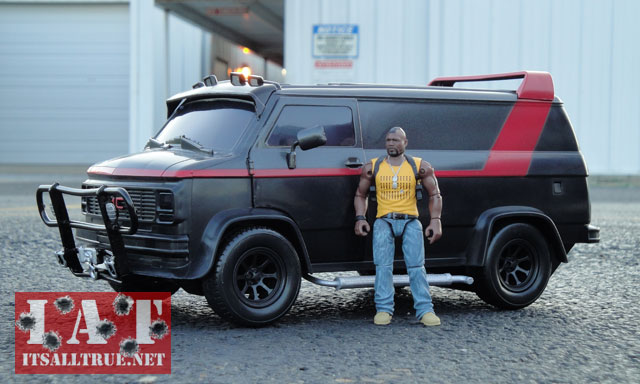 The van itself looks very close to the original TV show version even though it’s for the movie. There’s the signature red stripe, the spoiler on the back, a sun roof, the exterior sun visor, the bull bars on front with fog lights and even a molded wench. There’s also a red GMC logo and a sticker for the back license plate that says RANGR 75. There’s another detail that most toy replicas leave out; the top of the van, above the red stripe, is colored in dark gun metal gray. Most other toy replicas mistakenly color this area black.

One thought on “Jazwares A-Team Van and B.A. Baracus – It’sAllTrue.Net”