This week, while I was perusing the toy aisles of my local Toys R Us, I was surprised to see toys from the movie, The Last Airbender. I’m a big fan of the animated series – I even bought some of the figures that Mattel had made for the cartoon a couple of years ago. 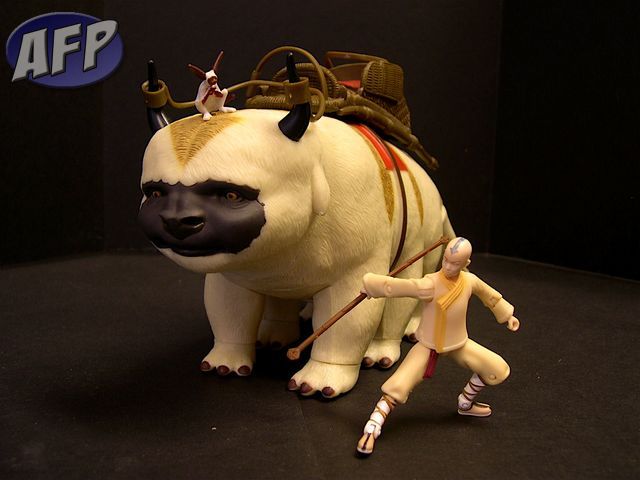 After finding out that Spin Master has the toy license for The Last Airbender movie figures, I was crossing my fingers that the movie would be a success and that the toys would turn out well. The cartoon had a lot of fans, both kids and adults – this would be a good opportunity for Spin Master to get in on some of the collector market if the movies do well as a planned trilogy. Now the first wave of toys have come out, and I managed to pick up Aang and his flying bison, Appa.

Did Spin Master do a good job? Let’s have a look! 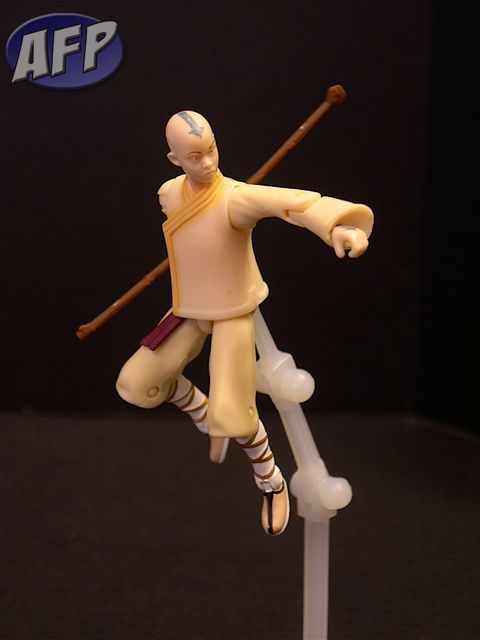 Aang is the last of the Airbenders. He is also the Avatar – the one who can harness all four elements of earth, wind, water and fire to bring balance to the world.

The figure is a smidge short of 3.5 inches, and has a ball jointed head, hinged/swivel shoulders, hinged elbows and swivel wrists. He also has a swivel waist, swivel/hinged hips (with the post peg vertical ), hinged knees and ankles. The figure is cast in colored plastic, with some painted details on the face, hands and lower legs. There’s also some paint on his costume but it is very minimal. The arrow tatoo on his head and hands seems to be tampoed on (kind of graphics stamping) to get all those fine details.

The sculpt is kind of hit and miss in certain parts. The head is actually a nice sculpt, which is not as noticeable because of the bad eye paint application. It would actually look like the actor, if it were just painted right. The torso is a bit flat for a clothed sculpt. The shape is too geometric, you can even see where his shirt folds in to the other side, the flap is cut too straight. It would’ve been nice to see some wrinkle and fold details, or even some texture on his torso. From some of the movie pictures I’ve seen, there seems to be some type of ribbon/fabric holding the flaps of his shirt in place (You can see this in the packaging). This is missing on the figure.

His arms have a weird proportion to them. The lower arm seems short compared the upper arm. It seems the articulation was placed a little to low. There are some wrinkle/fold details in the shoulder area but it is very minimal.

His legs do have some detail to them compared to the rest of his body, the straps on his lower leg are sculpted not just painted. 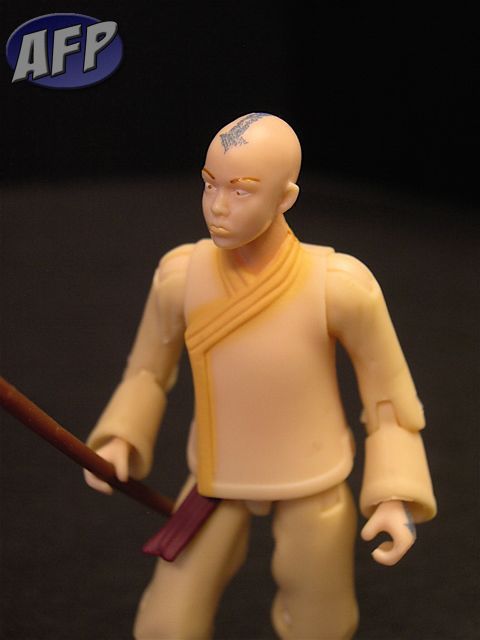 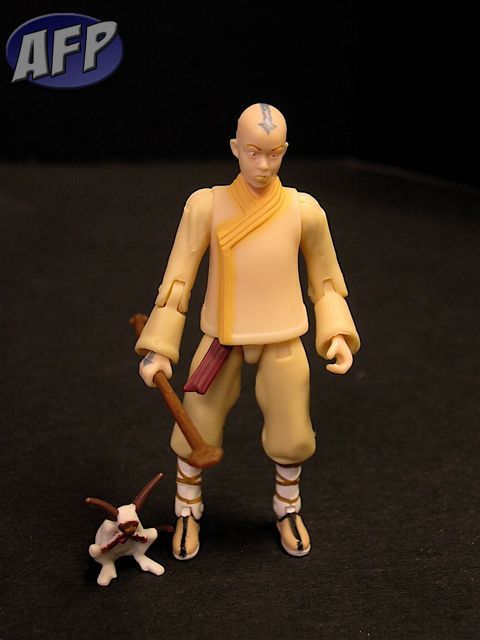 His articulation is okay. The head has some up and down movement. The waist swivel helps in getting some better posing. The leg articulation lets him do some fighting stances, with the legs spread out and knees bent. He can’t do some high kicks though. The hip joint post is connected vertically to his waist, so you can’t lift his legs sideways to do a split, with the legs facing front.  It took a while for me to get some nice poses out of his legs. His knees and his elbows would’ve benefitted from some swivel/hinge joints like what Hasbro uses for their Star Wars figures.

It is disappointing that I can barely get some nice poses out of his arms, the odd proportion, plus the lack of a swivel elbow (or bicep swivels), limits what his arms can do. This is an important point as he is a martial artist, and he should be able to get some good movement on his arms, especially for airbending poses.  Some torso articulation would’ve been a nice addition too.

He can do some nice fighting stances though, too bad they skipped on some key articulation points.

You’ll have to excuse the paint modifications I did to his eyes in the next couple of pics. I painted his eyes, then I realized Momo, his flying lemur, can actually sit on his shoulders, and I also discovered he has waist articulation (it was stuck before). You can see though, with painted eyes his head sculpt actually looks better! 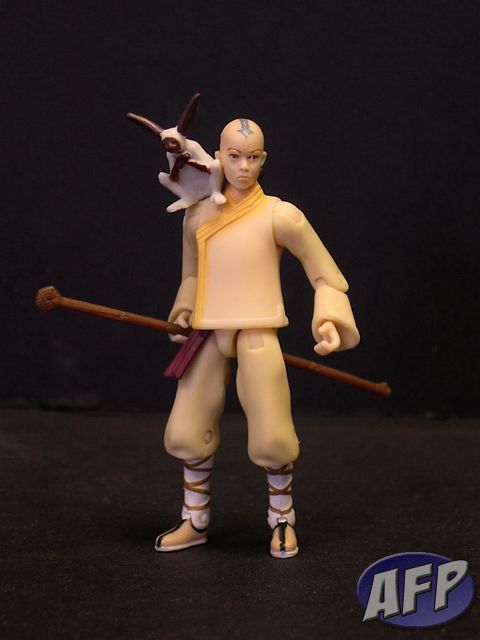 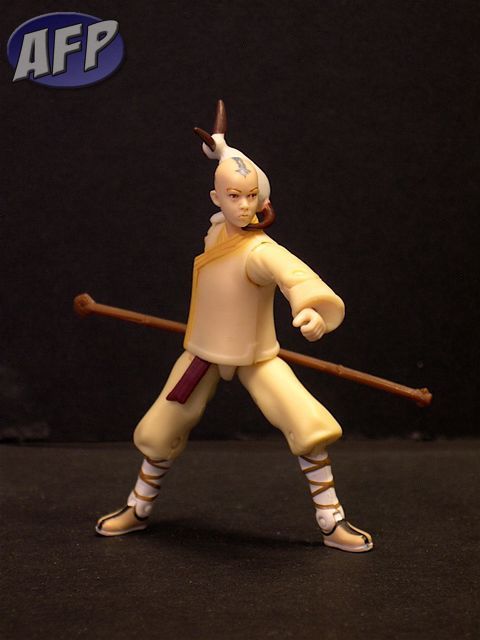 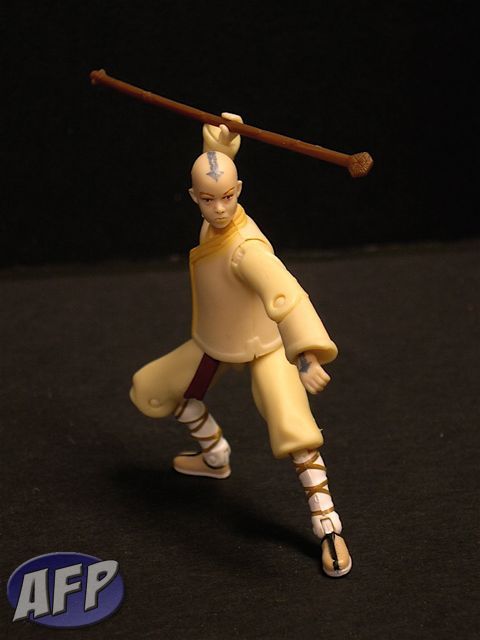 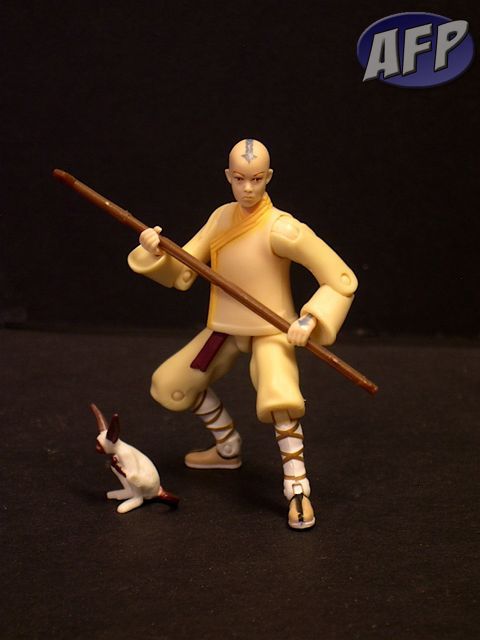 Aang comes with his staff, and Momo. His staff is a cast in brown, although looking at the packaging movie pic it is supposed to have a more detailed paint scheme.

Momo has no articulation and he/she (I’m not sure what Momo is!) has some sloppy paint application, I can barely make out his face.

Lastly, I think it would’ve been nice to see some airbending effects included with this figure. 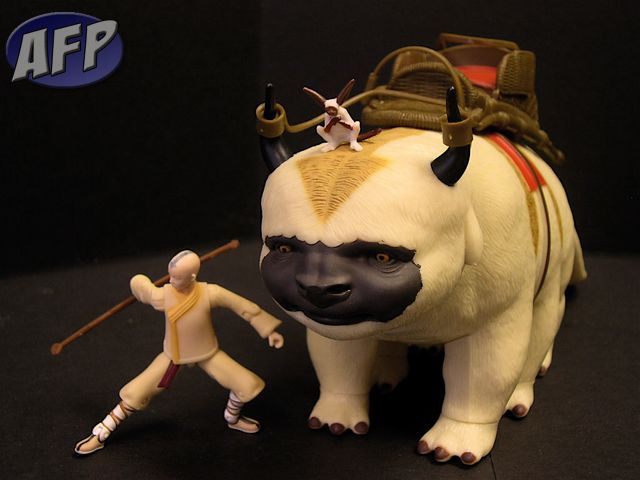 Appa is Aang’s loyal flying bison. In the cartoon, he is the group’s main form of transportation. He has some funny moments in the show, but he’s also one creature you don’t mess with. I’m hoping they keep his cartoon characteristics in the movie!

Appa is about 13 inches long and 6 inches from the bottom of his feet to the top of his “sled saddle”. His only articulation point is a swivel head, and his tail comes unnattached out of the package, you just have to connect it to his rear. He comes with a “horn harness” that Aang can hold on to while sitting on his back.

Size wise, he’s a bit too small for Aang. In the cartoon all three of them, Aang, Sokka and Katara, ride on Appa’s “sled saddle” (for the lack of a better term, it looks like a sled), and I’m assuming this is the same in the movie. In the movie pic (one of the thumbnails above) you can see where the sled saddle is actually tiny compared his body. From the looks of the toy, it looks like there’s only room for one more person behind Aang on the sled saddle. 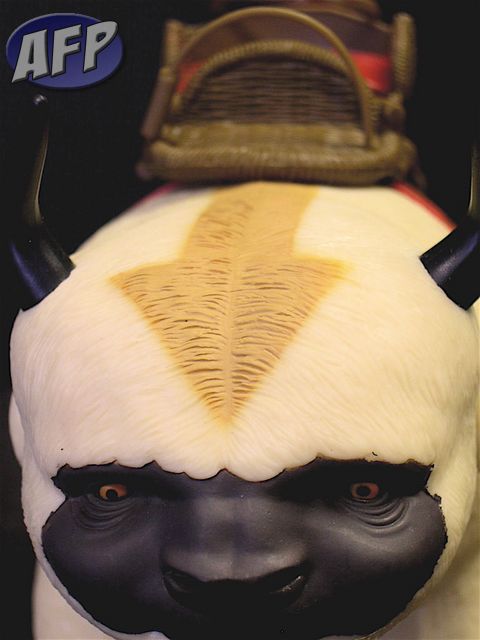 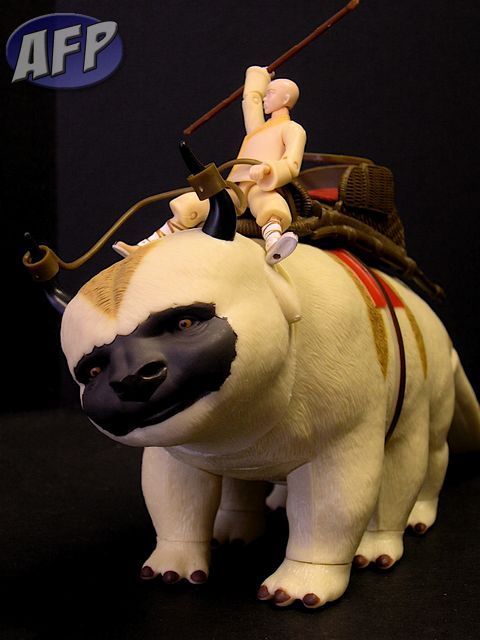 There’s some nice fur detailing all over his body, and the sled saddle has some nice sculpted details on it too. The head sculpt doesn’t look accurate though – it’s missing that bushy hair that Appa has in the movie pic. He’s also supposed to have a furry neck like a bison. I think this is important. The size inaccuracy, I understand, as cost is always a factor in making large figures, but they could’ve done a better job on sculpting his face. He really doesn’t look like Appa.

The arrows on his body are painted cleanly, but some sort of wash on his fur would’ve been nice.

Looking at the prototype pic below, there are extra details to his sled saddle, including an actual strap. On the final toy, the strap is just painted on. The prototype also has different paint detail on the fur surrounding his face. Probably some cost cutting had to be done.

Appa could’ve used some leg articulation too, so we can get some flying bison poses, I’m not sure if the prototype below has some leg swivels, but it would’ve been nice if the final had them. At first I thought the feet were articulated with swivel cuts, but I found out they weren’t. 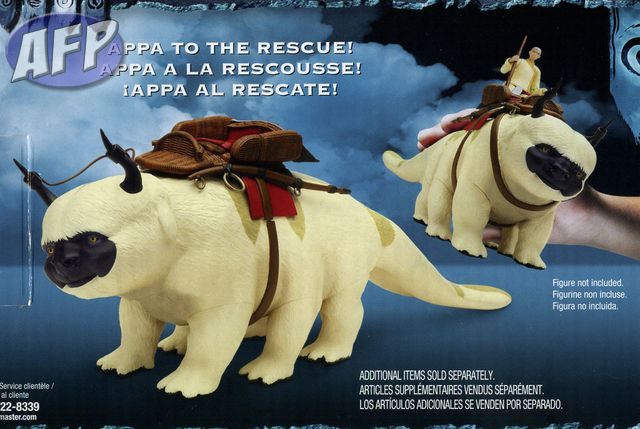 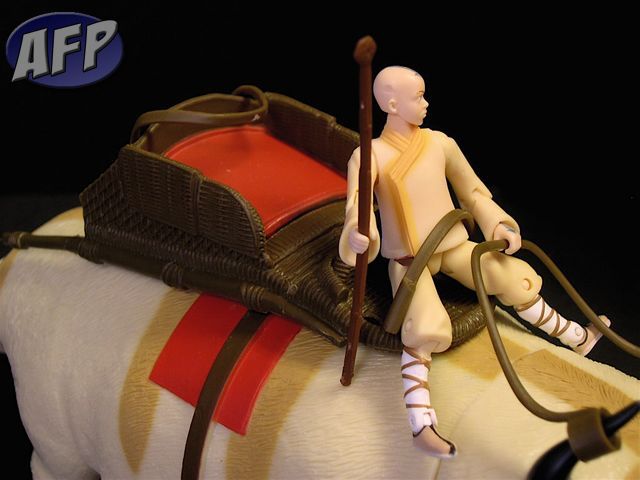 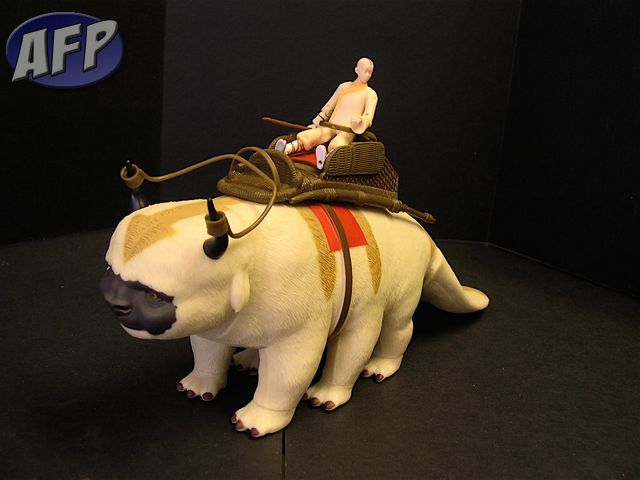 All in all, I am a little disappointed in these toys. Aside from Aang’s nice head, the sculpts needed a little more detail. Aang’s articulation is missing some key points, especially in the arms to be able to pull some martial arts moves, and Appa has almost none. I also wish there were better paint applications, especially on Aang.

Of course, my standards are that of an adult collector, and these might not have been made with that market in mind. I think, if the movie does well, kids will like these toys. It would’ve been nice if these toys had the attention to detail like the Star Wars and Iron Man figures, and it would’ve been good for Spin Master to get a little attention from the adult collecting community. If the movie does well, and two more movies are made to form the trilogy, I hope Spin Master considers upping the standards for these toys, the same way that Hasbro had upped the standards of their Iron Man toys for the sequel.

Thanks for looking and I hope you enjoy the pics!