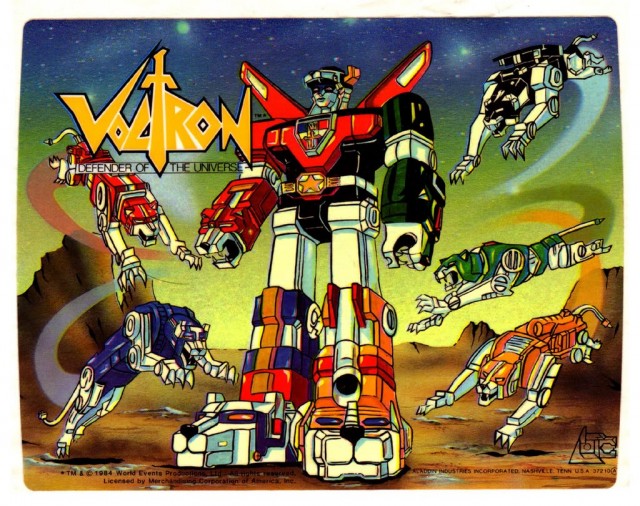 Hot on the heels of Bandai’s announcement that they will be making toys to accompany the relaunch of ThunderCats, we’ve got another revival of a classic animated franchise from the ’80s. Voltron will also be getting a new animated series in 2011, on NickToons, and Mattel will be making the toys.

Voltron hasn’t been out of the market that long – the 25th anniversary was last year, and Toynami produced collector-oriented classic Voltron diecast and vinyl toys.

Classic Media and World Events Productions have announced the relaunch of Voltron for a new generation of fans in celebration of the 25th anniversary of the original “Voltron” series, which first aired on television from 1984 to 1985. Effective immediately, Classic Media will manage international distribution and worldwide merchandising and licensing for Voltron.

A new animated television series is being created to debut on Nicktoons in 2011, called “Voltron Force.” WEP and Classic Media will produce, together with Kickstart Productions. Mattel is to develop a new line of Voltron toys for fans of all ages, adults who grew up with the popular ’80s series, as well as a new generation of fans that Voltron Force will create.

“Voltron,” the original robot-action series, stars five space explorers who pilot incredible robotic lions that combine to form Voltron, an invincible guardian sworn to defend the universe. “Voltron Force” will follow a group of new recruits on their once-in-a-lifetime chance to battle alongside the original group of heroes led by Commander Keith in the Black Lion and Allura in the Blue Lion. The new series will consist of 26 half-hour episodes of 2-D and CGI animation.

“Classic Media’s exceptional brand management capability will play an integral role in the highly-anticipated relaunch of this classic property,” says Ted Koplar, president of WEP. “Voltron’s legacy of innovative and iconic toys is in great hands with Mattel, whose vision promises to re-imagine and re-invigorate Voltron toys like never before.”