“Airlandia! A distant land where air is more precious than gold! Where the cruel Tyrants of Wind have seized control of ALL THE AIR. Only the Air Raiders, a band of valiant rebels, dare defy these evil dictators! With a convoy of air vehicles, these brave heroes battle the Tyrants, struggling to restore the breath of freedom. “ 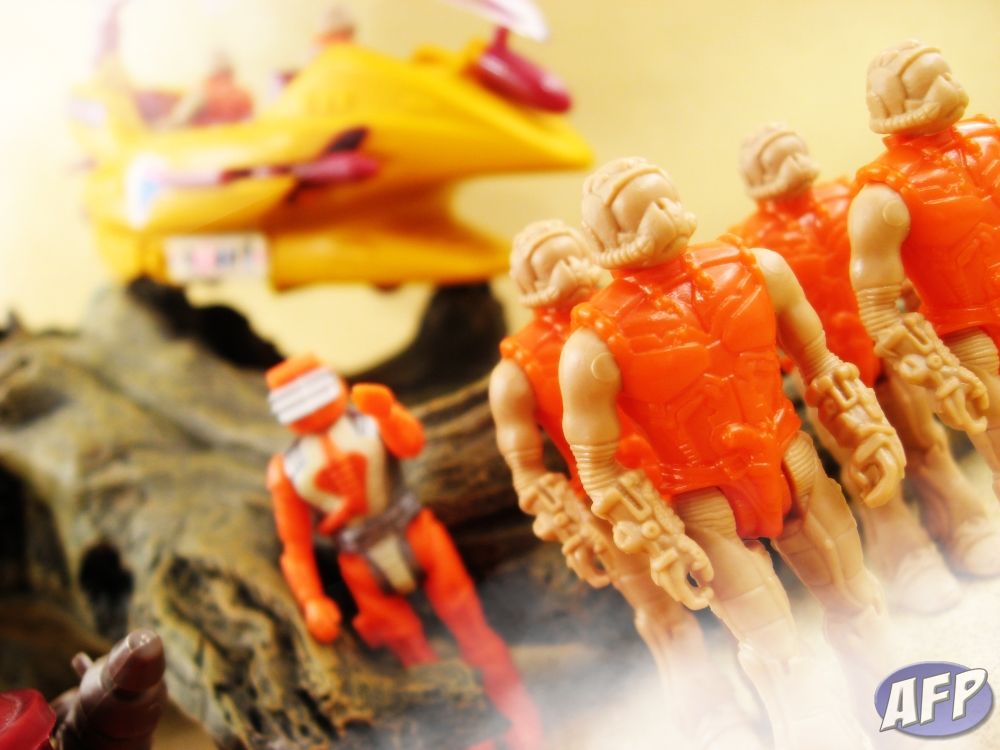 Once again we set the “Wayback-O-Matic” to 1987 for Hasbro’s release of Air Raiders. The main idea and gimmick to this line was air-activated features, such as launching vehicles and missiles. The line didn’t last very long, only about a year, but in it’s short life, Air Raiders brought us some amazing sci-fi vehicle designs as well as a playset and giant ship vehicle.

In particular today we will be looking at two vehicles and one figure set, the Thunderclaw, Storm Dagger, and the Air Raiders Battle Squad.

I am missing the air launchers for mine, but you still get the idea, you push down on the air cushion and it pushes the vehicle in the opposite direction. Each vehicle comes with 2 small Air Raider figures. The figures are incredibly detailed for the time, and are articulated at the legs and arms. The figures are unpainted except for particular special Commanders that came with battle packs or larger vehicles.

The main draw for me to this line is the ship designs. They are all very curved and organic looking, yet still very 80’s. The vehicles came in parts and had to be assembled yourself, which kept them affordable at the time.  There were at least 3 different size classes for the vehicles, one playset, 2 figure sets, and one unreleased playset.

Of small note, what actually got me back into this line was finding an old photo of myself from 1988 with the largest of the vehicles, the “Man-O-War” that I had got for Christmas that year. My grail would be to find one of these again. Air Raiders are somewhat scarce these days, and therefore go for slightly scalper-like prices, but if you can find a few of these little guys for a good deal, they come highly recommended!

“The Power Is In The Aiiiiiiiiiiir!”