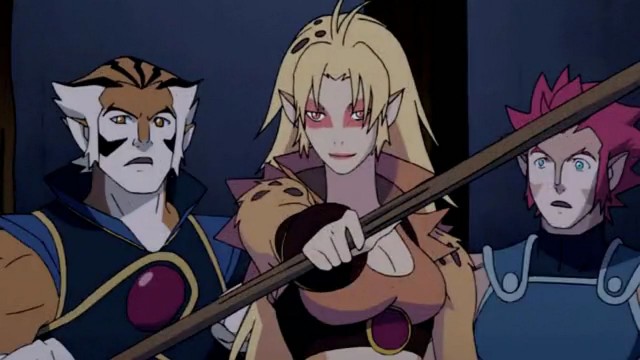 I was not able to attend the ThunderCats panel at WonderCon last weekend, but Warner Bros did send us the WonderCon trailer for the new show. My first thought from the opening scenes were that it felt very much like Avatar: The Last Airbender – then I noticed Ethan Spaulding in the press release – one of the producers from Avatar. Now my expectations are even higher.

I’m looking forward to the accompanying action figure series from Bandai. I’ve been thinking primarily about the 8-inch classic figures, but if the show is outstanding, I might have to pick up some of the toys that match up with the new animation style. I’ll reserve judgment, but the trailer is pretty good.

Warner Bros. Animation also presented the first-ever fan-convention panel for the new series at WonderCon, featuring producers Michael Jelenic (Batman: The Brave and the Bold) and Ethan Spaulding (Avatar: The Last Airbender), art director Dan Norton and Larry Kenney — who provides the voice of Claudus in the new ThunderCats and was the original Lion-O in the 1980s version. The four talked about the creative vision for the new series and also answered fan questions.

Based upon the iconic 1980s action classic, ThunderCats tells the epic tale of Lion-O and his battle against evil in the quest for the fabled Stones of Power. The series is executive produced by Sam Register (Teen Titans, Ben 10, Batman: The Brave and the Bold).