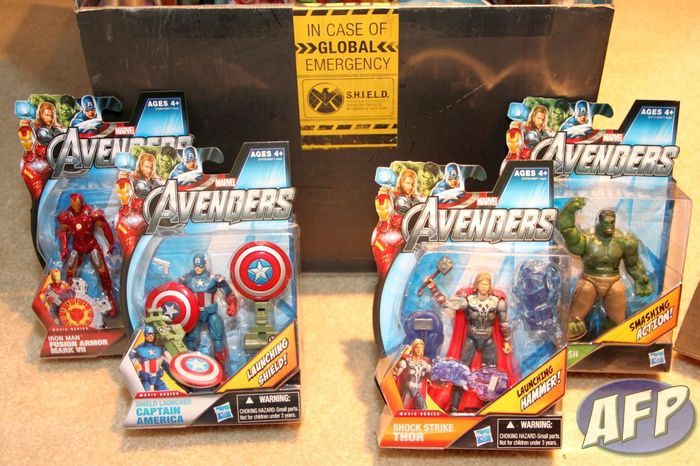 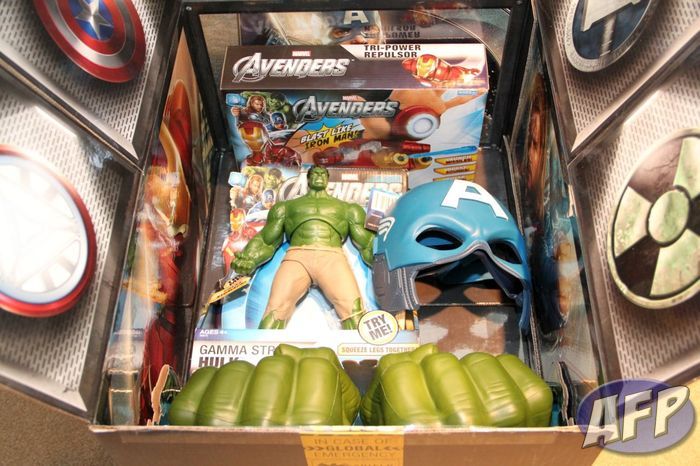 I had no idea when I posted the teaser pic for this Hasbro Avengers Movie promo package that it’d take me a week to post the contents. So sorry for the wait – I’ve been a little pre-occupied at The Fwoosh celebrating our 10th anniversary of being on the interwebs. Hopefully I can make it up to you by confirming that we will indeed be getting this whole package into the hands of some lucky Fwoosher.

The box, which I’m calling the Avengers Vault, holds a bunch of stuff. It’s got the four main Avengers in the 4-inch scale – Iron Man, Captain America, Thor, and the Hulk. It’s also got a 10-inch Ultimate Hero Hulk that packs an electronic voice chip with lots of entertaining sound bites and effects. And if role play is your thing, it’s got Iron Man’s repulsor, Cap’s mask, and yes! – the return of Hulk hands! As cool as all the goodies are, one of the coolest things about the box is the box itself. 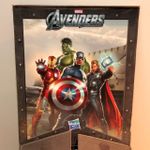 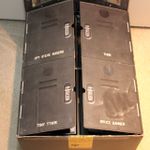 The box itself is massive – the Marvel Universe Thor is there just for size reference. The printing on the outside turns a boring cardboard box into the Avengers vault, complete with a sticker that doubles as packing tape beckons you to break the seal in case of global emergency. That’s just the beginning. Once you do break the seal, you’re treated to a cool print of the four Avengers on the inside lid. The flaps of the box double as locker doors, one for each of the four guys. Hulk smash puny locker!

The printing continues inside the locker doors, with emblems specific to each Avenger. The top tray holds the four figures, lined up with the specific lockers.

You’ve already seen the contents below the tray (the 10-inch Hulk and the role play items), but the printing continues on the inside panels of the box.

This is the coolest promotional item I’ve seen in a long time – kudos to the team that pulled this together! And it could be yours… make sure to check out the continuing celebration of Fwoosh’s 10 year anniversary, and you’ll find out how this bad boy can end up at your front door!