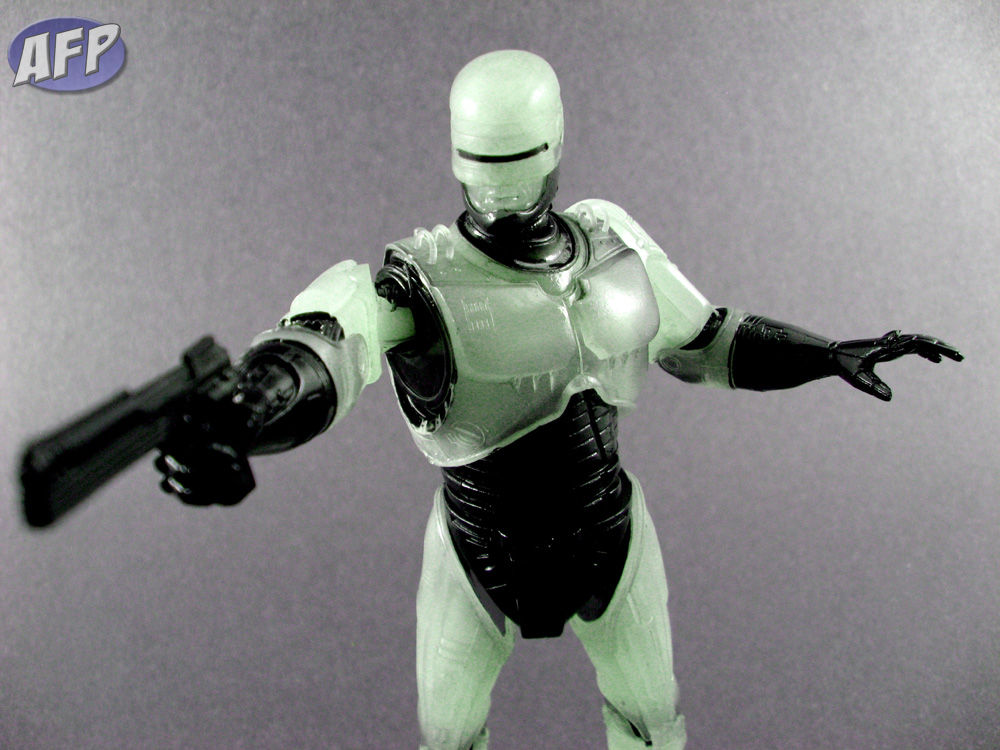 NECA is no stranger to making Toys R’ Us exclusives, but for me, this one takes the cake. GlowboCop is here!

This one kind of came out of left field only a matter of WEEKS ago and here it is on Toys R’ Us shelves already! That’s some crazy turnaround time on announcement to retail. I’m thankful for this because this is one I knew I had to get the instant I saw it.

The first draw for this figure is the packaging, it is filled with references and inside jokes alluding to the original Kenner Night Fighter Robocop. This includes such things as “Caps Not included” referencing the cap firing gimmick of the original, and the nicely Kenner styled “NECA” logo. 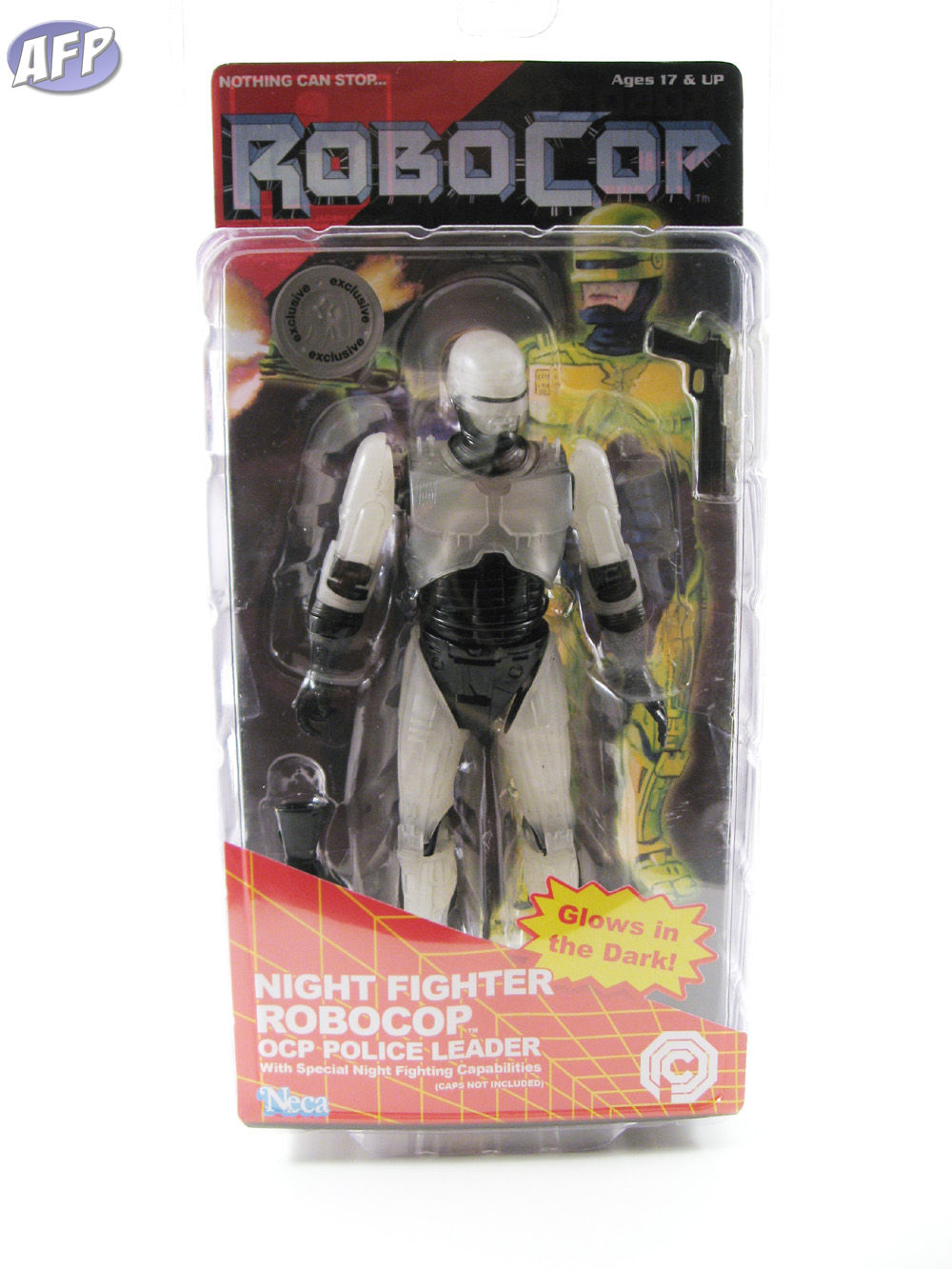 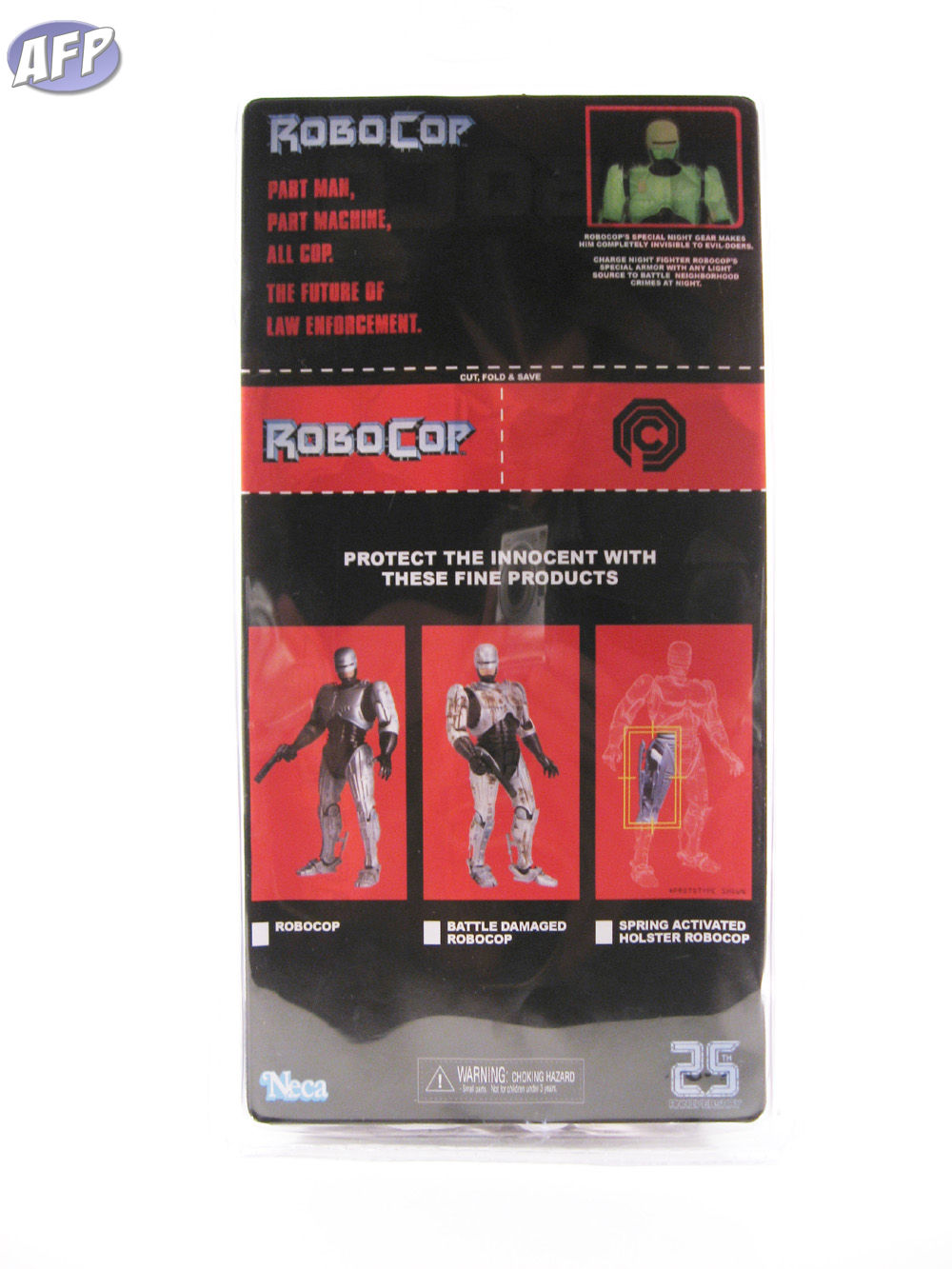 To the figure itself, it is mostly cast in translucent glow-in-the-dark plastic and has a very light black wash. This wash really turns me off, as its just light enough to look dirty like it’s not supposed to be there, and not heavy enough to do any real outlining of the sculpted details. It really just makes the figure look a bit messy, and takes away from a bit of the retro charm. This is a minor complaint though. Also the black paint on some of the joints on mine came off immediately, mainly on the elbow joint.

I also kind of wish the GITD plastic used was the more opaque solid type like used on MOTUC Scareglow. This translucent kind just seems more fragile and almost alien looking, and it’s a further departure from the vintage figure it is trying to be an update of. 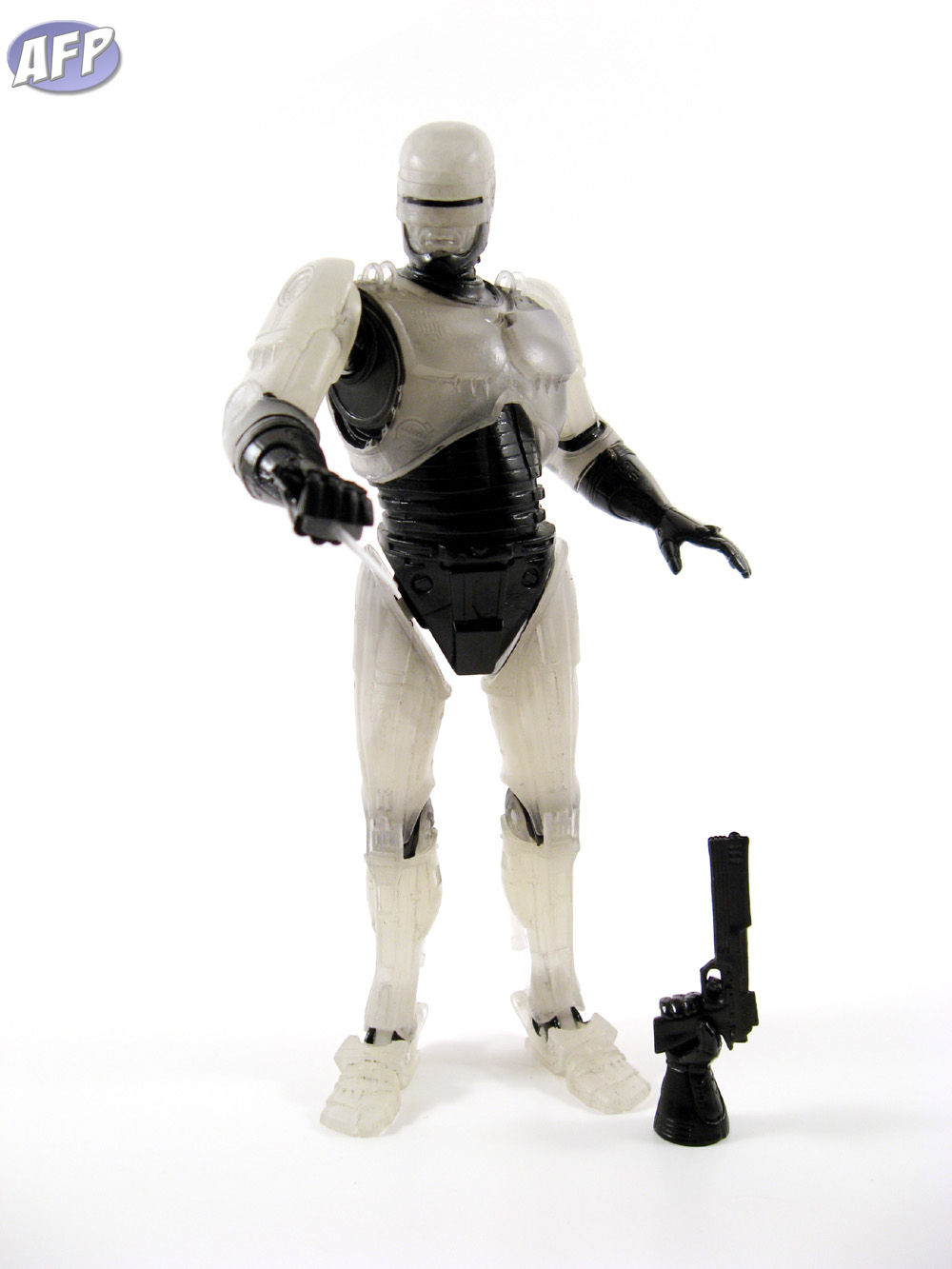 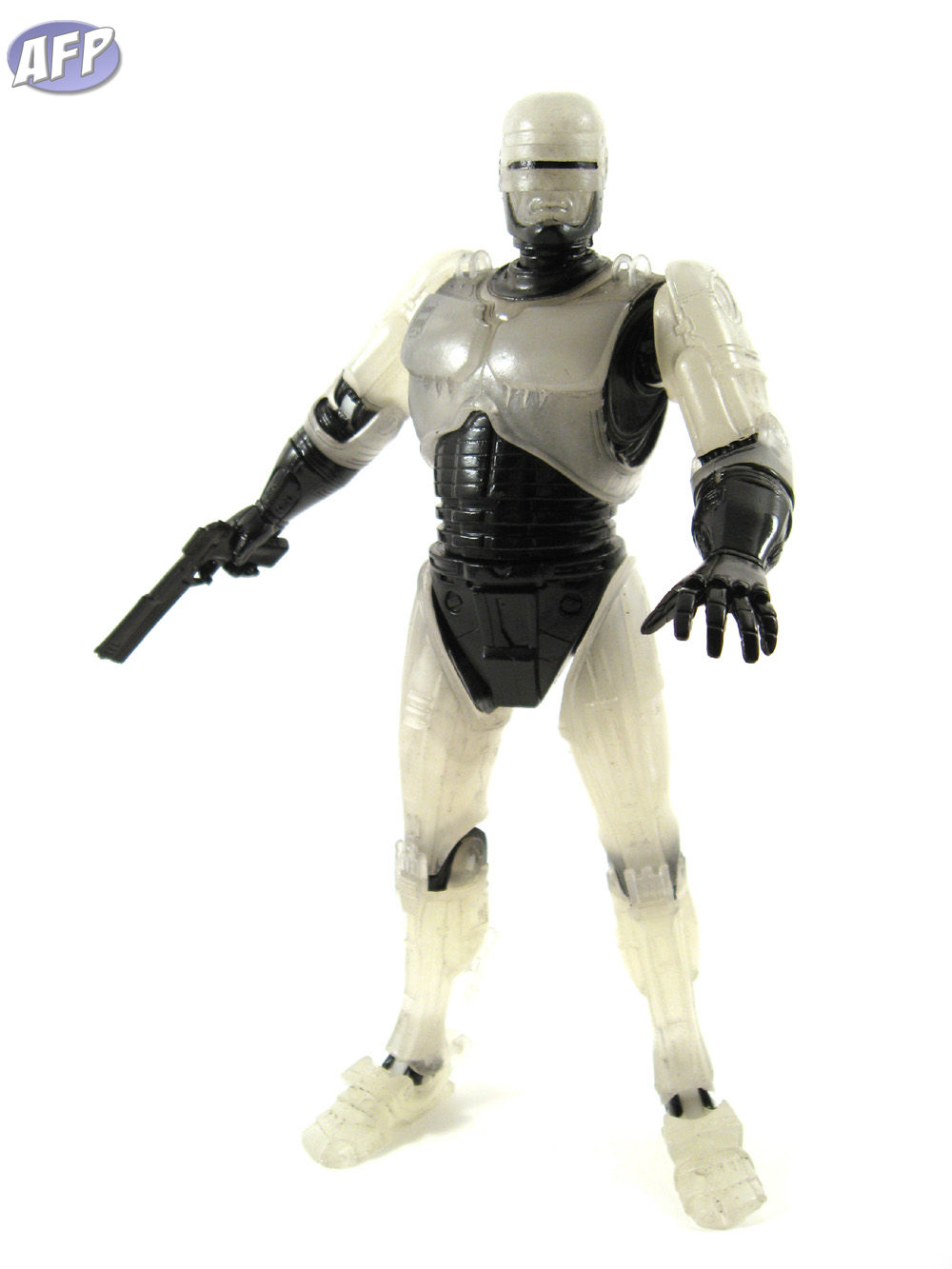 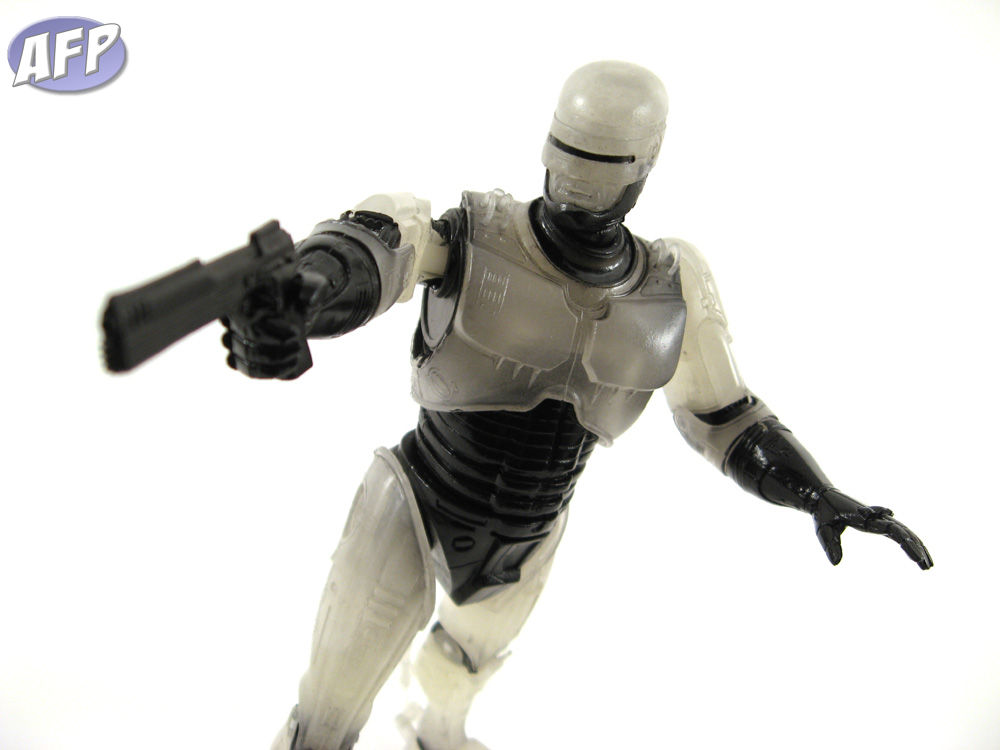 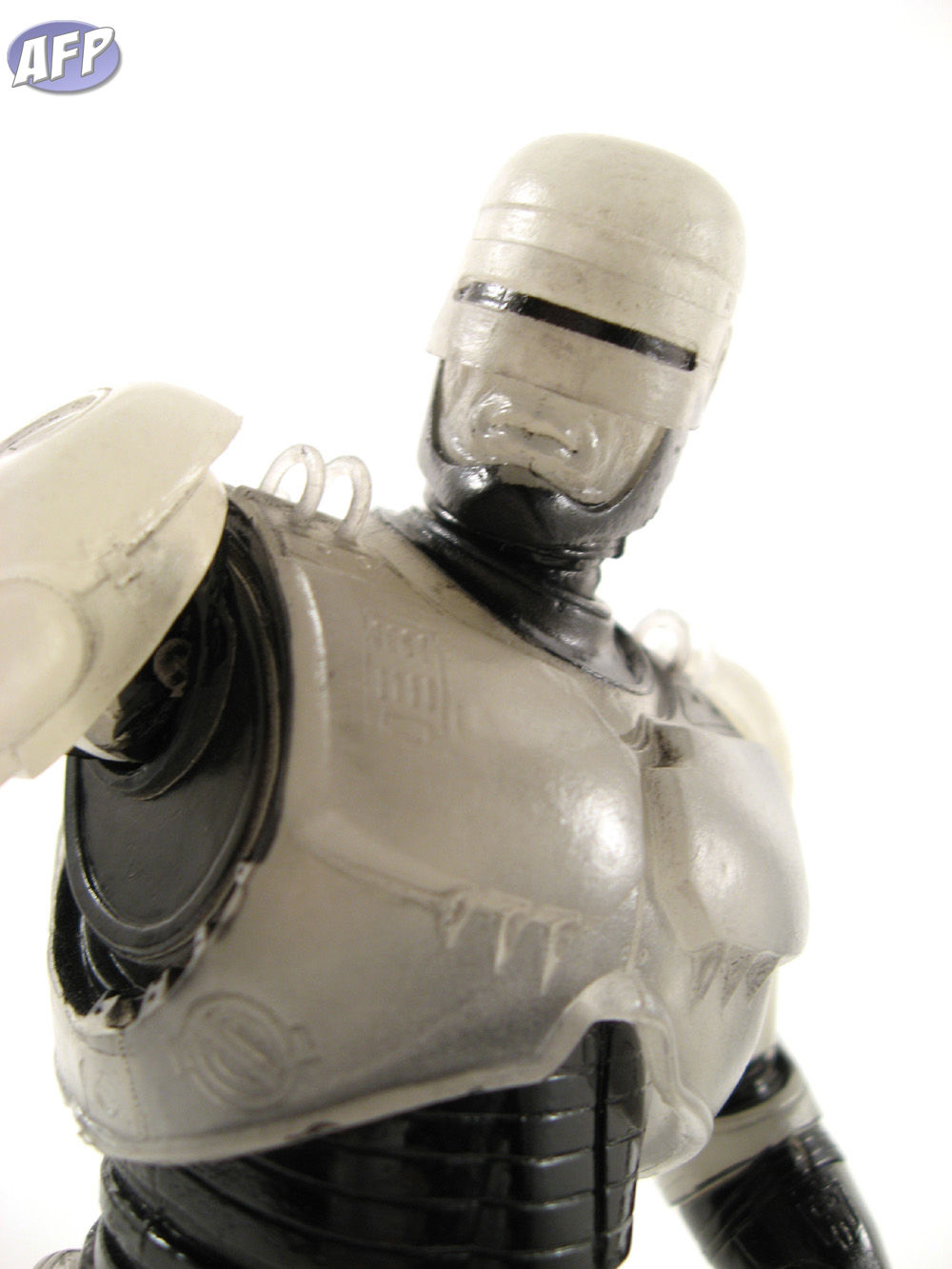 So how about the features: Robocop has the same articulation as the previous NECA Robocops, and includes an alternate hand and gun. The accessories and articulation all work as you’d expect them to. And the main feature with this one, the Glow-in-the-dark feature, works great as well. 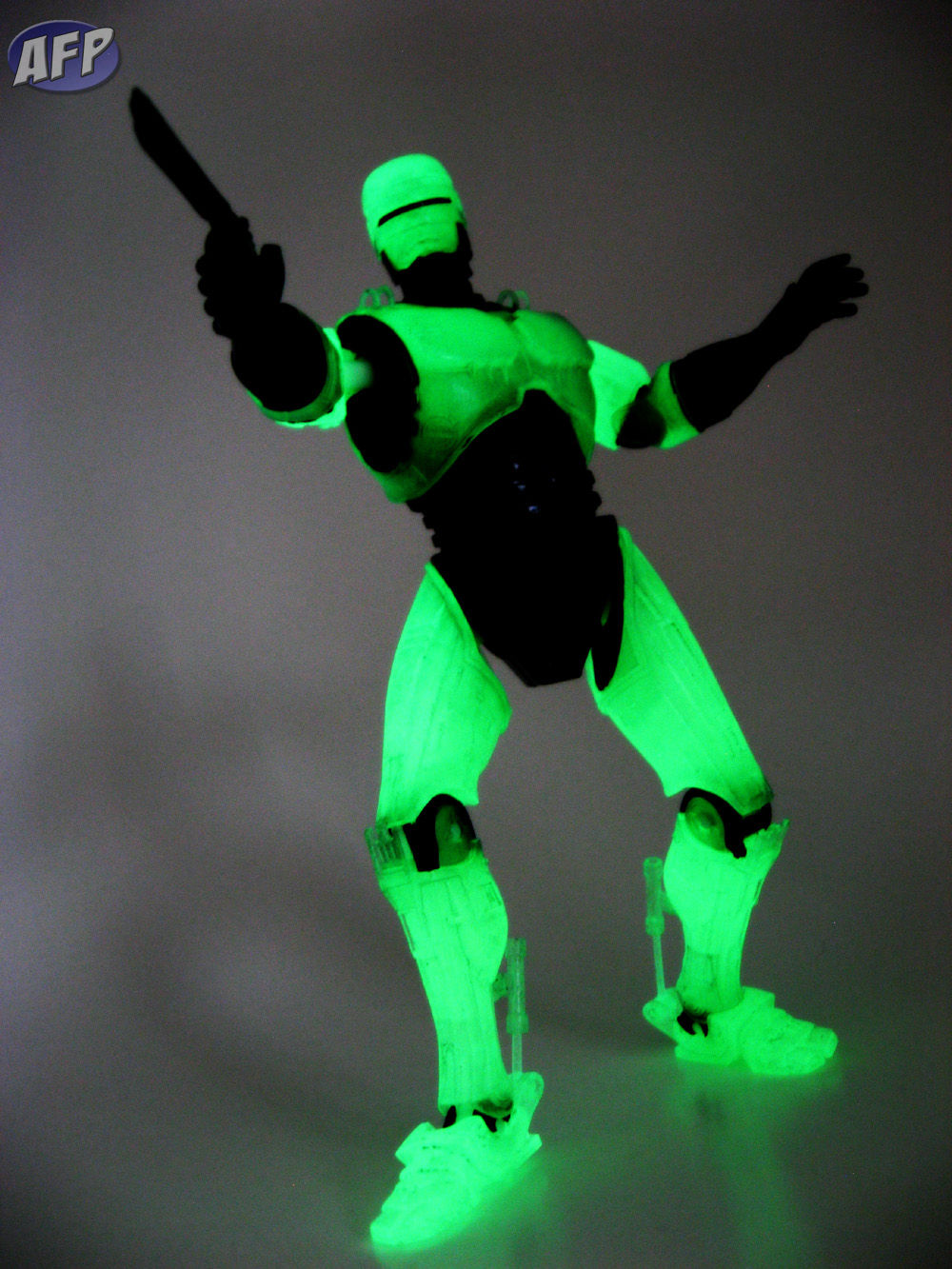 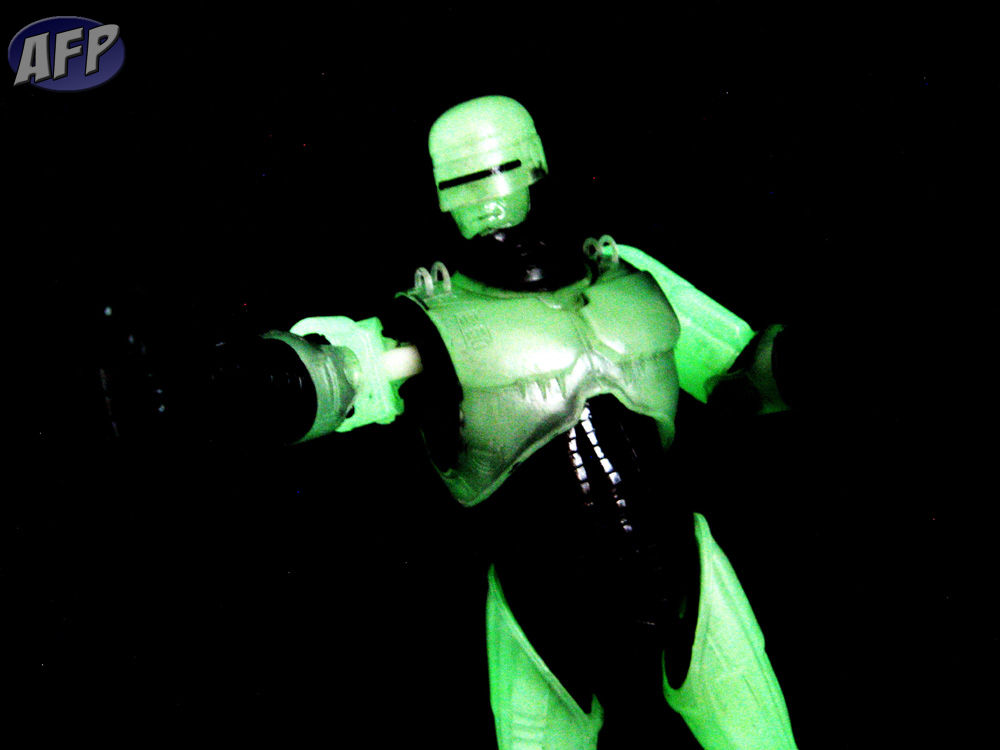 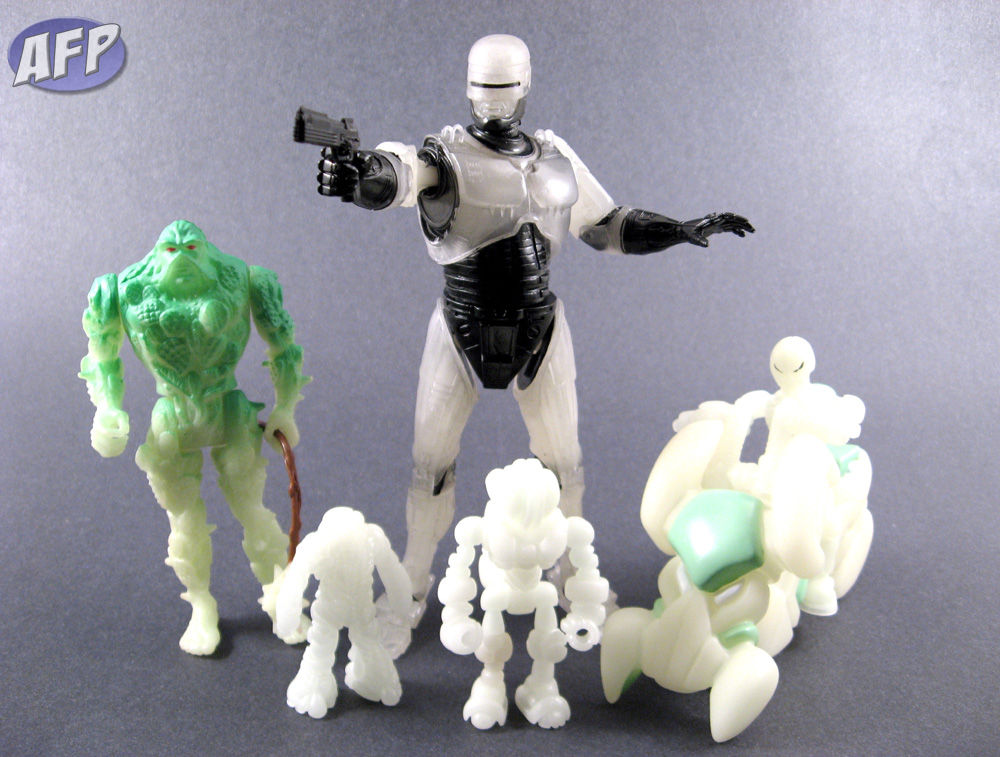 Overall, if you’re a fan of Robocop, the 80’s, or just Kenner’s vintage toylines, this is a great figure to add to your collection. The black paint flaking and the odd choise of black wash on the GITD plastic are a buit of a turnoff, but if those don’t bother you, this is a solid figure. 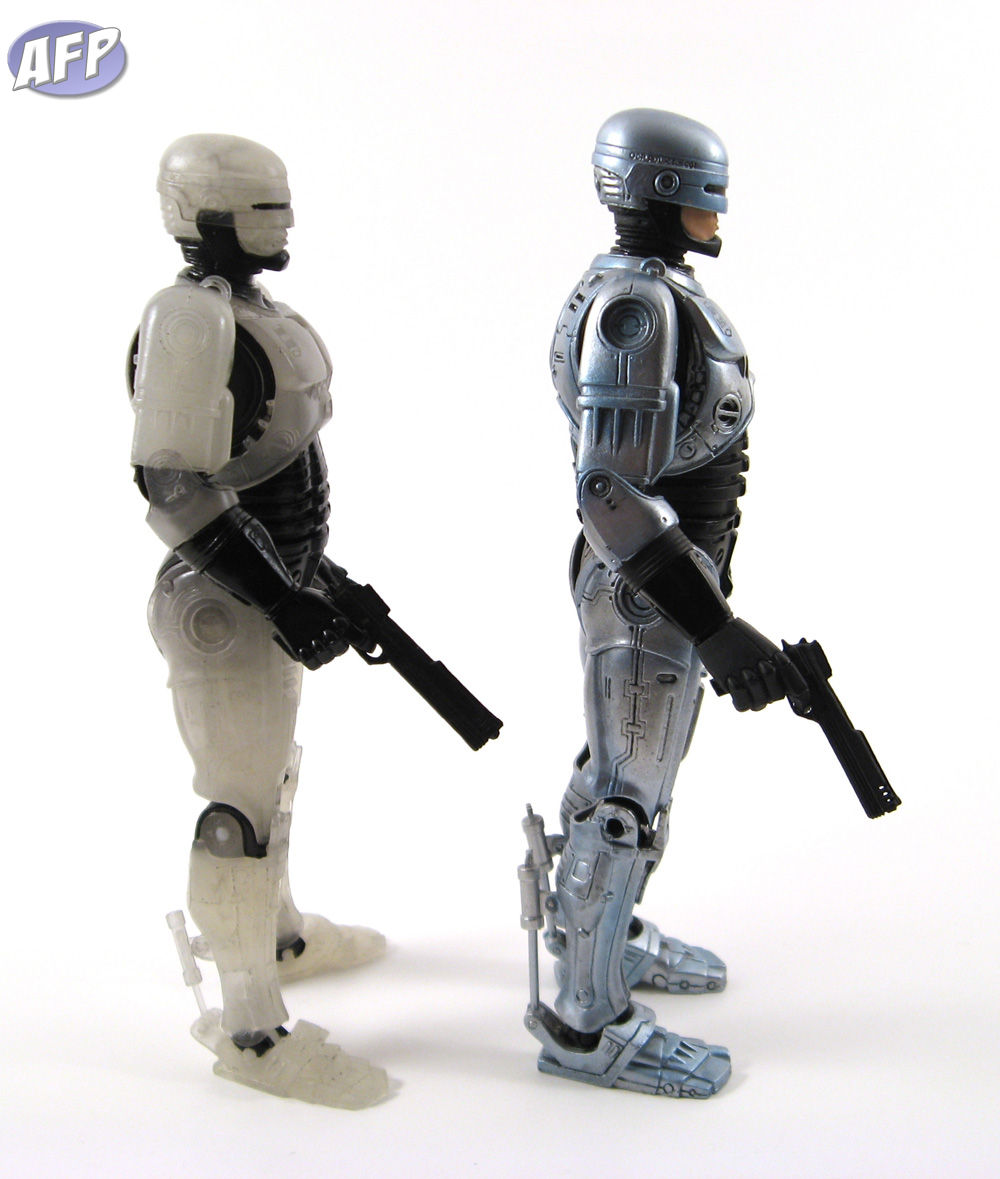 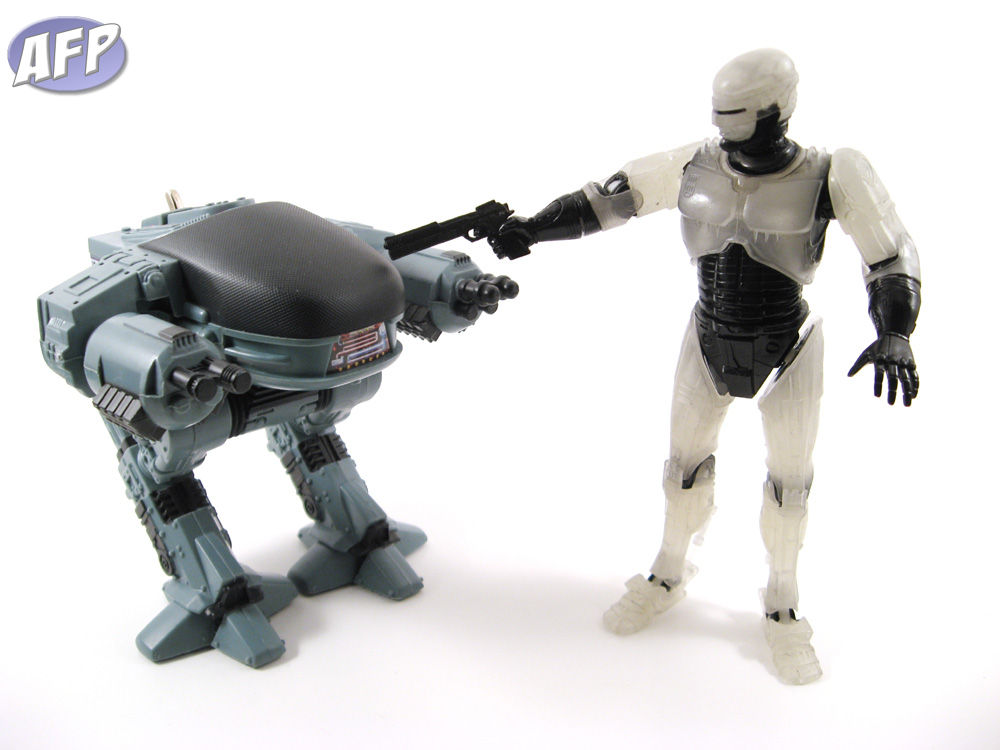 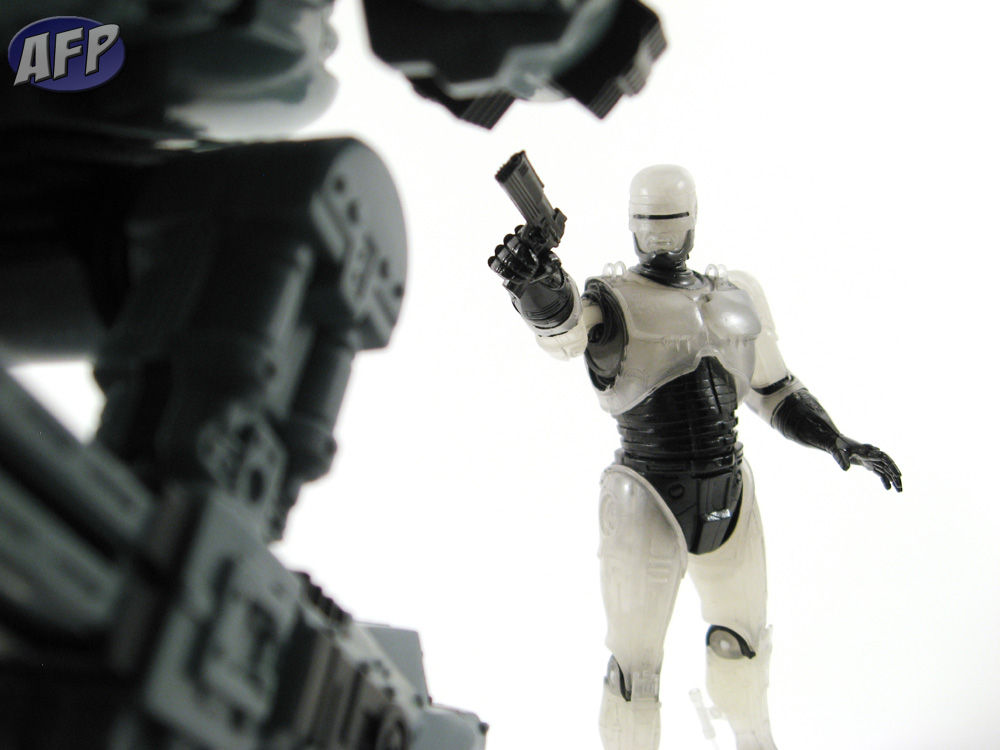 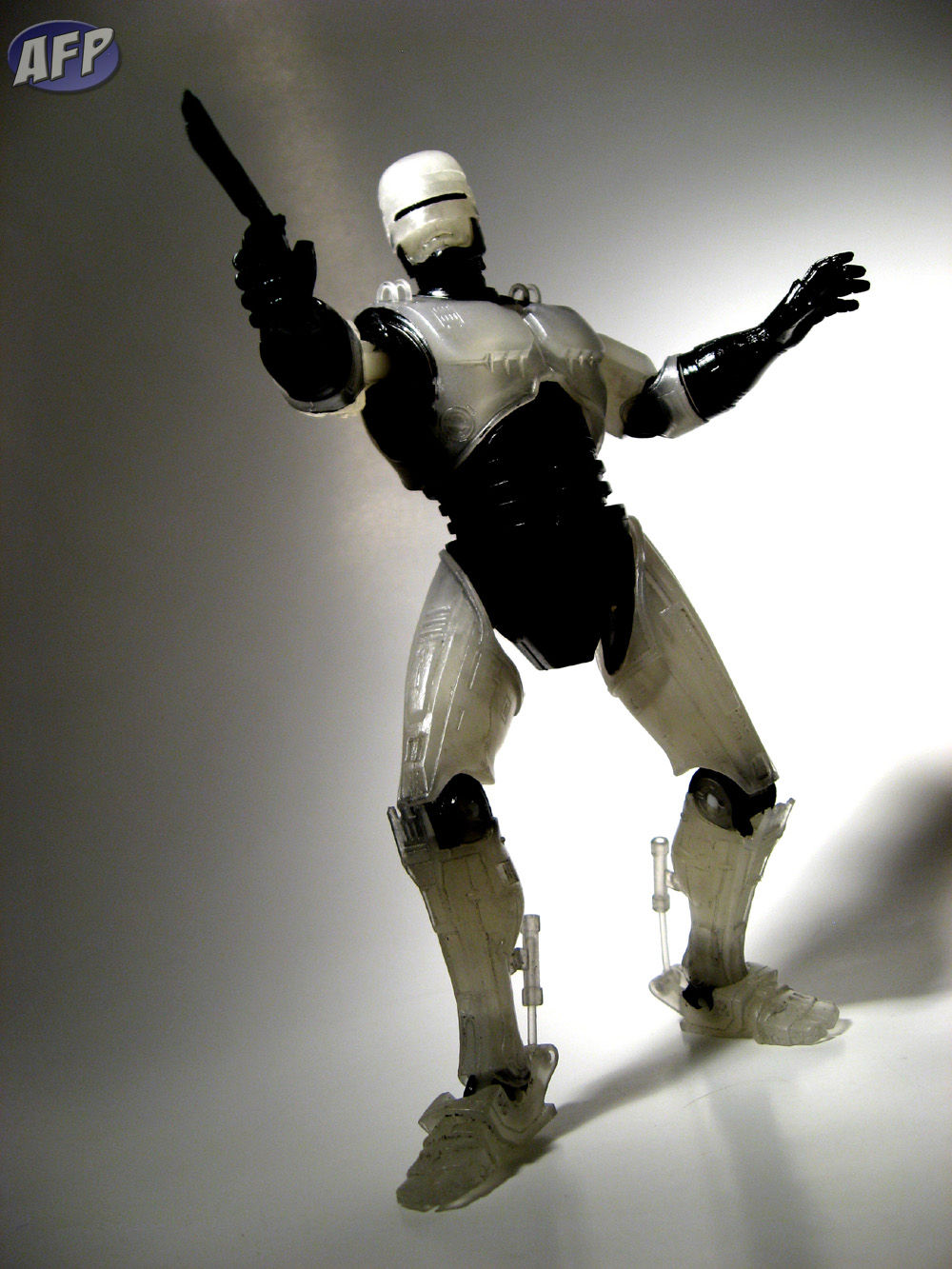