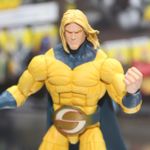 Hasbro added Hyperion to its Marvel Legends display for wave 1 in 2013. Hyperion (who will be a swapout with Sentry a la Thunderball and Piledriver) is built on a new base body that falls between the Nick Fury / Ka-Zar / Punisher body and Warpath / Thunderball / Piledriver body types. That will fill in a medium heavy build in the lineup that can be reused for guys like Luke Cage. In the same vein, the Red She-Hulk is on a new base body for the larger female characters, like Titania.

I got to talk to Dwight Stall briefly today, who is overseeing all the Marvel lines. It’s clear that Marvel Legends is still his baby (and he’s still fighting for a Stryfe figure for the line). He explained that wave 3 (pictures in my Marvel Legends Preview Night post) was a fill-in wave for 2012. He says that originally Hasbro only planned 2 waves for 2012, but since they dropped within a month of each other and was selling well, they decided to add wave 3 so we wouldn’t go another year without figures.

So, yes, wave 3 will be without a Build-a-Figure, but the BAF will return in the 2013 wave 1, and they are planning to add it to the case tomorrow – so stay tuned for another update.

A couple folks at Hasbro acknowledged that Madame Hydra’s head got pinched in production. I let them know that I was disappointed to see Mystique using that pinched head, but they think it looks ok with the blue skin tone. What do you guys think? Dwight also told me that the Punisher head was even more severely pinched than the Madame’s – but they were able to catch that earlier in production so it was fixed.